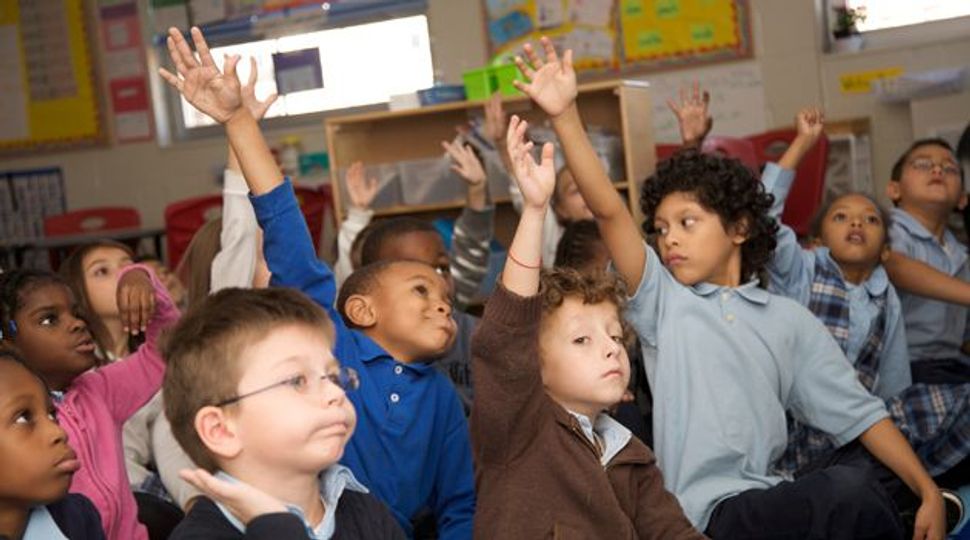 Every morning at the CommuniKids Preschool in northwest Washington, D.C., children are greeted with hola, not hello, and they banter and sing in Spanish rather than English. The preschool has another site in Northern Virginia where parents can choose immersion in French as well as Spanish.

At the French Maternal School in Georgetown, 2- to 5-year-olds learn entirely en français. Later on, students who want to continue foreign language immersion can opt for the Washington International School, which is known both for its linguistic prowess and lofty tuition fees, or apply to one of the city’s few bilingual public schools.

Starting in 2013, Washington kids will also have the option of putting their names into a lottery to attend the DC Hebrew Language Charter School, a secular public charter school that’s not Jewish in nature but is entirely Hebrew-immersive.

Hebrew is the latest addition in the movement for early foreign-language study in order to promote fluency rather than mere proficiency. After an initial tremor of anxiety over church/state separation — Can Hebrew be taught outside a Jewish context? What is the curriculum in a Hebrew language school if not Bible? — the idea is taking hold.

A handful of such schools exist in North America today: the Hebrew Language Academy in Brooklyn; Hatikvah International Academy in East Brunswick, N.J.; Ben Gamla, in Broward County, Fla., and an immersion program embedded in a public school in Manitoba, Canada. In the next three years, Hebrew immersion charter schools are expected to open in Harlem and in Los Angeles, San Diego, Minneapolis, Atlanta, San Francisco and Fairlawn, N.J. Like the others, they are expected to be secular, public and entirely focused on normative education, with a thrust on creating Hebrew fluency in the student body, not on Jewish identity.

American educators came late to foreign language immersion. Through the 1950s, researchers here believed that learning two languages would at best confuse kids and at worst impair them, while jingoism railed against teaching in languages other than English. U.S. schools held off offering a second language until junior high or middle school, unlike their European and Canadian counterparts, who have long known that kindergarten, if not before, is the time to begin.

Now, conventional wisdom holds that children best learn second and third languages the earlier they are exposed. And the benefits of a truly bilingual childhood — opening new paths for work, creativity and cultural exploration — appear to extend through the end of life. A study by the Rotman Research Institute and York University in Toronto, published in the November issue of Neurology, suggests that bilingualism may help delay the onset of dementia and Alzheimer’s disease. In the study, a group of Jewish Eastern European immigrants living in a Toronto old age home, who learned English as a second language, were surveyed and compared with their monolingual peers. The bilinguals declined mentally five years later than the monolinguals. Forced to suppress information whenever speaking (Is it “head” or “rosh”? “Mayim” or “water?), the bilinguals had literally trained their brains to work around problems.

But, obviously, most parents selecting bilingual education for their kids aren’t considering who the toddlers will be in 75 or 80 years. Instead, they are weighing globalization, opportunity and mental exercise. And some of those interested in Hebrew study are less committed to instilling a Jewish identity per se than to the idea of a multilingual life.

Says Bryce Jacobs, one of the founders of the DC Hebrew Language Charter School: “People interested [in the Hebrew-language charter school] are those who are committed to public school, who want second language acquisition. For some, Hebrew is important but they don’t want Jewish day school. And they want to support the city.”

Michelle Lackie is one of the parents working to bring DC Hebrew to the city. Lackie agrees, noting that schools in her neighborhood are “known for poor education” and that, since her family is committed to living downtown, she wants to “find a school that offers an excellent education.”

She adds, “We’re also very interested in our son being in a heterogeneous, cross socio-economic environment, which we hope the Hebrew Language Charter school will be, somewhat. We are not considering a parochial school and will most likely end up at a charter school if we can get into one.”

Jacobs thinks Lackie is not alone. “I don’t think this is an alternative to Jewish day school,” she said. “It is not Jewish education. People who want religious education will not be interested.… We don’t want to go near the constitutional line.”

Sara Berman is chair of Hebrew Charter School Center, the nearly two-year-old umbrella Hebrew charter-school organization that is funded in large part by her father, philanthropist Michael Steinhardt. (As yet, DC Hebrew is not affiliated with the organization.) “We don’t go near the slippery slope” regarding religious instruction, Berman said. Instead, she champions the benefits of bilingualism: “There is insurmountable evidence that having your children receive a bilingual education helps [them] in a variety of ways far beyond acquisition of language.”

When asked why Hebrew versus, say, Spanish, she replied, briskly: “Hebrew is the language that enlightenment thinkers knew. It’s a secular modern language that millions speak.” She underscored the business relationship between the U.S. and Israel and pointed to the success of HLA, which is a member of the Hebrew Charter School Center. At HLA, Hebrew is infused throughout the day, in various subjects, as well as in a one-hour language and grammar session. The students, Berman says, are increasingly fluent, with fluency being the goal for graduation.

That’s important, says attorney Rebeccah Gan, a DC Hebrew supporter but not yet a parent. “Being Hebrew speakers at home, we believe [that] teaching Hebrew as a modern, living language on an immersion school model can benefit kids a variety of backgrounds — both for Jewish children and non-Jewish children. [My husband] and I have both taught Hebrew school and find that [it] is a model [that] does not largely get children excited about becoming Hebrew speakers.”

Meanwhile, Jacobs calls the Hebrew charter idea a total experiment. “I work in education reform, and I am committed to good schools for all D.C. kids,” she said. “There is an idea that this school can be a model of diversity and integration. Everyone asks ‘Why is someone who is not Jewish going to send kids to a school to learn Hebrew?’ But we believe that it will be a stellar school with rigorous academics.”