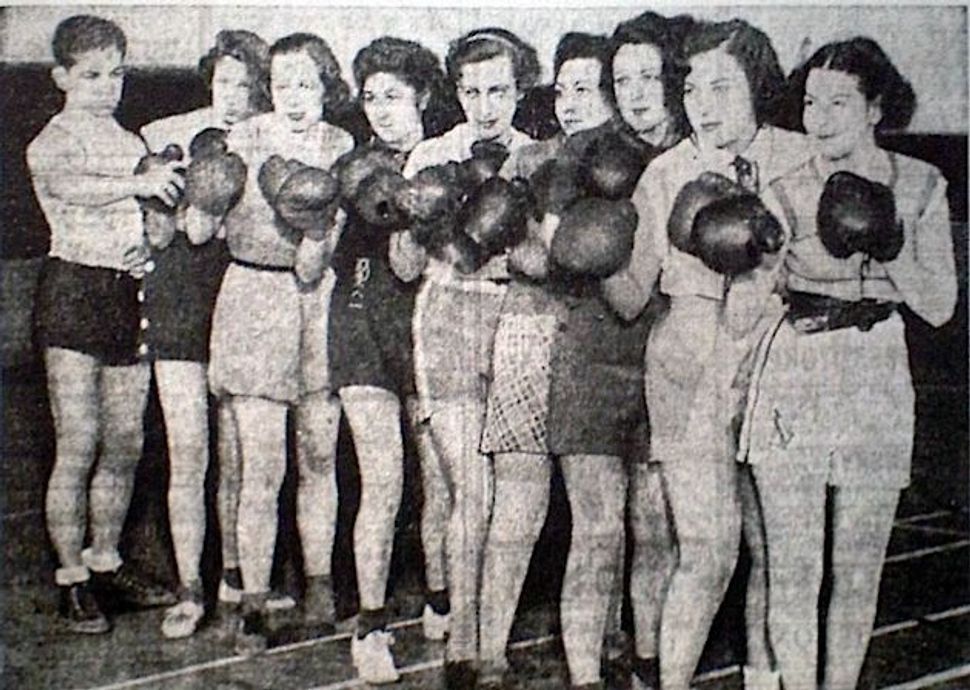 Wanna Fight? [75 years ago] These girls from Westchester Collegiate Center in White Plains, N.Y., have formed a boxing team under the tutelage of Milton Greenberg (left). They are looking for fights with boys. Image by Forward Association

100 Years Ago in the Forward

A fire occurred at New York City’s Hebrew Sheltering Guardian Society, a Jewish orphanage on 151st Street and Broadway. More than 700 children live in the orphanage, and they were all on different floors when the fire, which started at a construction site next to the orphanage, broke out. A police officer walking his beat saw the fire and sounded the alarm. He then ran to tell the head of the orphanage, who rang the bell to alert the children. There was initially great fear and much confusion, although the children quickly managed to get out of the building. They watched the smoke pour out. The firefighters arrived and determined after a short time that the fire was not dangerous; they quickly extinguished it. As the firefighters packed up, the orphan boys had a snowball fight on the street.

75 Years Ago in the Forward

A Nazi organization called the German Christians has rewritten and modernized the New Testament to show how Jesus and his apostles were opposed to Jews and how they fought against Jewish influences. This new Hitler-approved edition also transforms Jesus himself into a Nazi and an anti-Semite. Initially, it seemed that the Nazis wanted to do away with Christianity because of the troubling fact that Jesus was a Jew. But a great deal of opposition arose, especially from Catholic precincts. Among the opposition was the influential Archbishop Michael von Faulhaber, who began to preach against the Nazis. As a result, Nazi propagandists got the idea of remaking Jesus and his apostles in their own mold, as anti-Semites, in order to gain acceptance among Christians.

50 Years Ago in the Forward

Half of the 5,000 Jews who were forced to leave Egypt by the Nazi-like regime of Gamal Abdel Nasser have arrived in Israel. The rest, according to news sources, are en route. Another 10,000 Egyptian Jews are said to have boarded ships already and are ready to sail to Israel. It’s thought that another 25,000 Jews remain in Egypt, and if current political and social conditions remain the same, they will also end up leaving the country. The situation in Egypt is such that the government has restricted Jewish businesses so much that it has become impossible for Jews to make a living. Jewish lawyers are no longer permitted in court, and Jewish doctors have been forbidden to practice. Jews also are not permitted to take money out of their bank accounts. As a result, they are leaving in droves.