The Case for Community 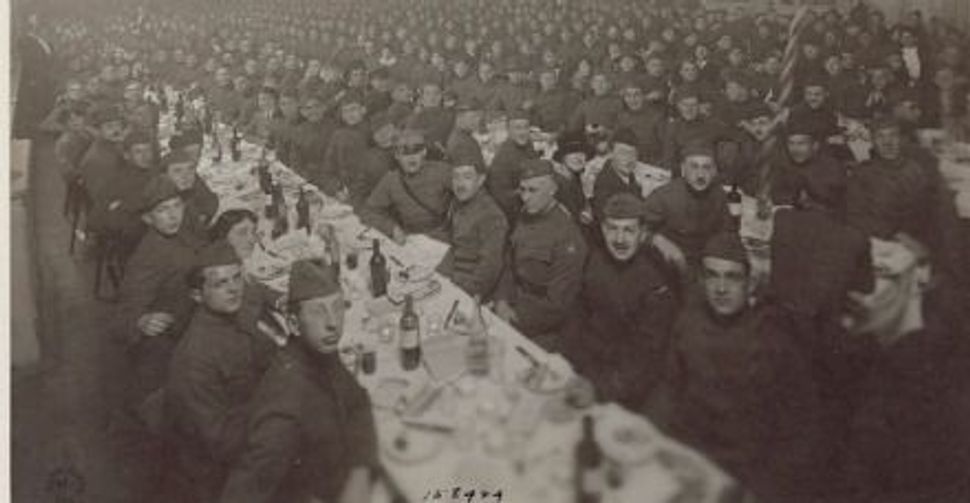 Image by courtesy of the National Archives 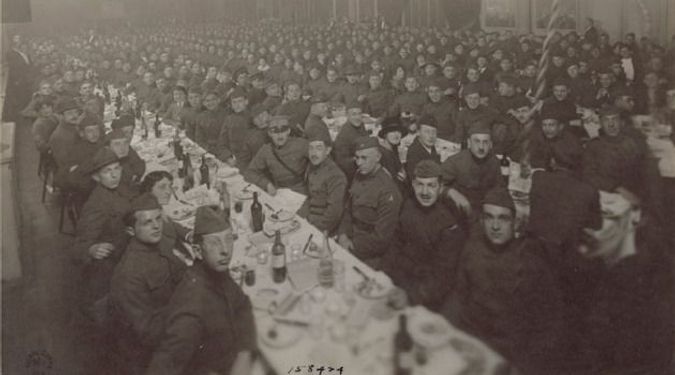 Springtime in Paris: Thousands of Jewish servicemembers celebrate Passover in Paris in 1919 during World War I. Image by courtesy of the National Archives

Images of a multi-generational family seated around a Seder table are a dime a dozen. Adorning the exterior of a haggadah or the label of one kosher-for-Passover food item after another, they’re so widespread our eyes glaze over at the sight of them.

But one image of a Seder — a grainy photograph — stops me dead in my tracks every time: that of the American Expeditionary Forces in Paris in 1919. Now a part of the holdings of the National Archives, it was recently featured to great effect in an exhibition at the archives called “What’s Cooking, Uncle Sam?,” which explored the relationship between the government and American food practices.

The photograph captures what appear to be hundreds upon hundreds of Jewish servicemen in full military regalia seated at tables so long they extend beyond the picture plane. Amid the sea of faces, some wear the rimless spectacles then à la mode, others sport mustaches. Everyone has his head covered but here, too, variety prevails — a reflection of military hierarchy. Some soldiers wear a soft cap; others a peaked cap with a shiny, hard brim, and still others a broad-brimmed felt hat that is close kin to a Stetson.

This vast army of men is leavened, and lightened, by the presence of a few women. You have to look hard to find them, but they’re here and there, sprinkled throughout.

The photographer, making use of a large format or “banquet” camera, captures the Seder at midpoint or, as the lofty language of one haggadah from that period would have it, “post-prandial.” Half-empty bottles of wine line the tables; knives rest casually across the surface of white plates, their work done; shards of matzo accumulate. Up above, chandeliers glisten, giving off a warm glow, while heavy draperies shut out the cruel and ugly outside world.

Everyone at this Seder looks directly at the camera. Some of the celebrants, perhaps having imbibed too much wine, flash big, boyish grins. Others bear rather somber expressions, either sensitive to the importance of the occasion or, one imagines, longing for home and the consolations of a real family Seder.

A moment in time, a respite from the horrors of war, this very public Seder was organized by the Jewish Welfare Board, then an organization in the first flush of infancy. Today we take for granted, as a matter of course and as official government policy, that the ritual needs of Jewish servicemen and women will be tended to. But back in 1919, that was not the case. Jewish soldiers and sailors had to fend for themselves, scrambling to find matzo in war-torn Europe, let alone mount a Seder.

The Jewish Welfare Board came to the rescue, distributing the ritual bread, holding religious services on board transport ships and arranging a Seder for the 50,000 American Jewish soldiers estimated to be in France that year. As Chester Jacob Teller, the Jewish Welfare Board’s executive director (explained in a detailed article in the American Jewish Year Book of 1918-1919), its purpose was “to help America win the war” by sustaining the morale of the troops.

Teller’s language, as he introduces American Jewry to the work of his organization, is worth quoting in full:

“With a breadth of view and a degree of foresight perhaps never before equaled by a war administration of any other country, the United States Government set itself to thinking out the war problems not only in terms of ships, guns, munitions, and supplies, but also in health, decency, personal improvement of the men, contentment, esprit. In short, all those elements that go to make up the concept of morale in its broadest implications.”

Religion happened to be among those elements, prompting a wide array of Jewish organizations from the Agudath ha-Rabbonim (the Federation of Orthodox Rabbis) to the National Federation of Temple Sisterhoods to join together under the umbrella of the Jewish Welfare Board to help service the religious and cultural needs of soldiers and sailors of the Jewish faith.

The task wasn’t easy, Teller publicly acknowledged. Given the variegated nature of American Jewish life, how could it be? “We have been criticized now for being too Jewish, and again for not being Jewish enough; for advocating what has been called ‘segregation,’ and again for being exponents of what has been called the melting-pot theory…. Fault is found with us for permitting Yiddish books to be circulated in the [army] camps, and again we are blamed for not providing enough of this literature.”

Letting off steam, the Jewish Welfare Board’s chief executive gave voice to the frustrations which, then, as now, attended every attempt to unify the fragmented American Jewish community. But he didn’t end there. Instead, Teller concluded by hailing the Jewish Welfare Board as a “unique opportunity” for American Jews of all stripes to transcend their differences and to celebrate the notion of community.

I suppose that’s what makes this photograph of a wartime Seder in Paris so very meaningful to me. Everything about it, from its scale and composition to its subject and timing, makes the case for community.

The Case for Community