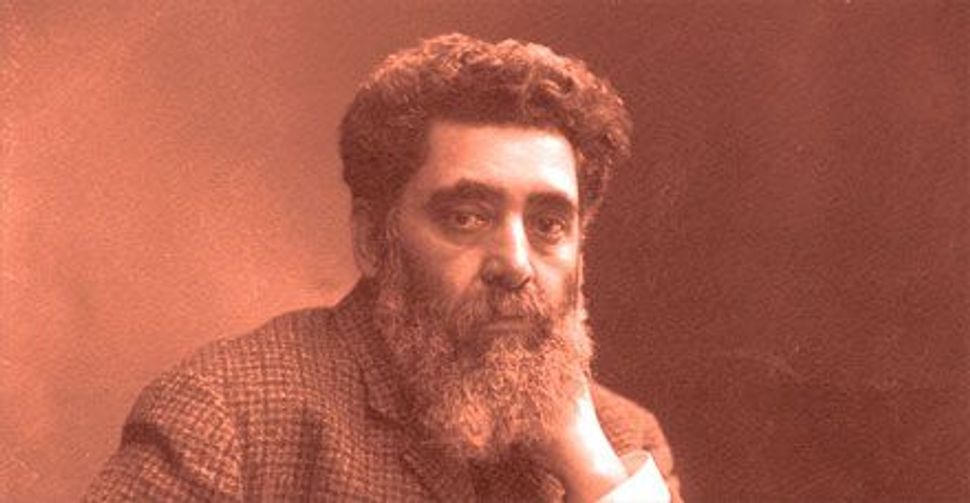 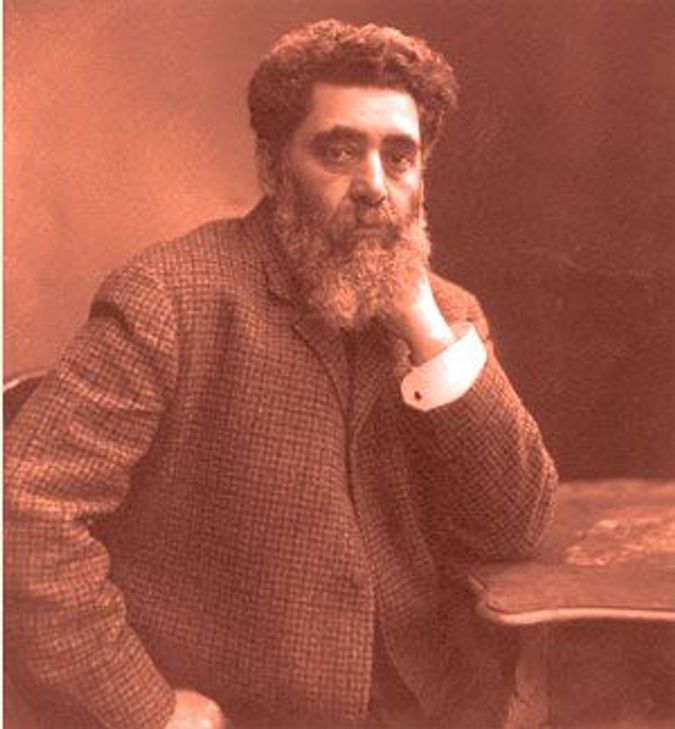 Yiddish Master: As well as adapting works of Tolstoy and Turgenev for Yiddish stage, Jacob Gordin penned his own plays filled with sex and intrigue. Image by Yivo Institute for Jewish Research

Barbara Henry’s new book recounts a telling anecdote about the opening of Jacob Gordin’s first Yiddish play, in 1891. As the play progressed, the New York audience became restless; it wanted more songs and diversion than it received from “Siberia,” a serious play about an escaped convict. After Act 2, actor and manager Jacob Adler came onstage and asked the audience to show some respect for a “famous Russian writer.” The audience members honored Adler’s request, but the actor had not been completely honest with them.

Although Jacob Gordin (1853–1909) was Russian, and his literary sources were indeed extremely well known, he himself was not particularly famous. Gordin became better known after he derived some of his plots and characters from Tolstoy and Turgenev, as Henry persuasively demonstrates in “Rewriting Russia: Jacob Gordin’s Yiddish Drama.”

The book examines in depth three of Gordin’s plays: “The Jewish King Lear,” “The Kreutzer Sonata” and “Khasye the Orphan.” Henry’s investigation of these Yiddish plays reveals how the Russian-born playwright came to adapt Tolstoy and Turgenev for theater audiences on Manhattan’s Lower East Side, transforming himself from journalist and religious reformer into a playwright who was actually famous.

By the time Gordin immigrated to New York in 1891, Henry notes, “reverence for Russian literature was a given among immigrant New York’s leftist Jewish intelligentsia, for whom Russian writers enjoyed a close association with a radical political activism.” Gordin benefited from that favorable literary environment, as he portrayed Russian characters and settings in his drama; but he was not simply exploiting the New York Yiddish audience’s Russophilia. Writing plays about Russian life allowed Gordin to revisit his own past, to draw on his earlier life and writing as well as on his former country’s literature, and to reshape Russian culture in new forms accessible to Yiddish speakers in America.

Henry’s book explores, in her words, “the interconnectedness of Russia, Russian literature, and Russian Jews that Gordin’s plays insist on, and their belief that Russian culture is vital and essential for American Jews.” While admitting that her focus on three plays among the many written by her subject “constitutes a narrowing of focus that is at odds with the titanic nature of his energies and achievements,” Henry proceeds to find a wealth of artistic and social implications in her limited sampling.

Those interested in the performance history of Gordin’s plays will have to look elsewhere: to Joel Berkowitz’s fine writing on “The Yiddish King Lear”; Beth Kaplan’s Gordin biography, “Finding the Jewish Shakespeare,” or the reviews reprinted in Zalman Zylbercweig’s Lexicon of Yiddish Theatre. Henry focuses on play texts and their sources, not on stage production. Her subtle philosophical and aesthetic commentary establishes that while the plots of these plays are filled with sex, betrayal and murder, they are not simply the shund, or literary trash, so popular among audiences at the time.

Gordin’s background as a learned, maskilic Jew, journalist and activist in Russia, and his inspiration from writers like Tolstoy and Turgenev, enabled him to write drama more challenging and controversial than the usual shund. And controversies did erupt as a result: One New York newspaper, the Yidishes Tageblat (Jewish Daily News), found that “thanks to Jacob Efimovich Gordin” and his play “Khasye the Orphan,” “the sacredness of the Jewish family has been ruined, the honor of the Jewish home has been shamed.” Der Morgen Zhurnal (The Morning Journal) wanted the play to be “purged from the Yiddish stage for the good of the entire Jewish population.”

Drawing on Turgenev’s story “Asya” for his creation of “Khasye the Orphan” (“Khasye de Yesoyme,” 1903), Gordin effected a shift to symbolist drama from realism and prose fiction; his portrait of failed marriage, poverty and suicide that so disturbed the critics “makes us believe that hell is here, and looks very much like a place we know, and that the people in it may in fact be us,” Henry argues.

A year earlier, Gordin adapted Tolstoy’s “The Kreutzer Sonata” as “Di Kreytser Sonata,” and while his play departed from its source in many regards, Henry astutely sees “Tolstoy and Gordin converge… in their confidence that fiction has the power to affect conduct.” The power of art, pretense and performance (not just Beethoven’s music) becomes the playwright’s subject. When Gordin set out to adapt Shakespeare’s “King Lear,” he found inspiration in a Turgenev novella based on the Shakespeare play, and the novella’s “successful model of literary transplantation” from Britain to Russia influenced Gordin’s own version, relocated to Vilna. In all three of these works, the fusion of Russian literature and Yiddish drama for an American audience displays what Henry calls an “internationalist and integrationist ethic.” Gordin’s art initiates a dialogue between different cultures, not just new dialogue among stage characters.

Gordin adapted non-Russian texts besides Shakespeare. He drew on writing by Goethe, Schiller and Hauptmann for some of his plays. Late in the 19th century, when Jacob Adler wanted to raise the level of Yiddish American theater to the high, modern standards of Ibsen, it made sense to adapt Ibsen as well as Tolstoy. These adaptations have endured as part of the American Jewish tradition. More recently, in the tradition of Gordin’s adaptations, Tony Kushner wrote an English version of S. Ansky’s Yiddish play, “The Dybbuk,” and Donald Margulies adapted Sholem Asch’s “God of Vengeance”; it is surprising we have not also seen new adaptations of Gordin’s plays.

Scholars, too, could do more with Gordin’s legacy. Henry observes that “in the century since Gordin’s death, there has not been a single scholarly study of his plays.” Her book is a start, but she considers in detail only a few of the many theatrical texts Gordin wrote. Plays such as “The Russian Jew in America,” “The Golden Calf,” “The Jewish Queen Lear,” “The Oath,” “The Lunatic,” “Capital, Love and Murder,” “The Slaughter” and “Without a Home,” all mentioned in passing by Henry, deserve more extended study as a group.

“Rewriting Russia” also revisits Gordin’s differences with Forverts editor Ab Cahan, who retracted “crucial support of Gordin’s newest plays, and that marked the beginning of Cahan’s determined assaults on Gordin’s character and dramatic legacy.” Since those 1904–08 attacks, the playwright has done reasonably well without Cahan’s support. Although living Yiddish theater has dwindled, theater historians have shown Gordin respect (the respect Adler asked for in 1891) as a famous playwright. Being largely untranslated, unread and rarely staged only enhances his classical status.

The playwright himself longed to have his drama produced on the English-language stage, but, with notable exceptions of recent versions by Nahma Sandrow and Ruth Gay, many of Gordin’s plays are unavailable in English. While we wait for those new translations, Henry’s “Rewriting Russia” provides us with valuable previews that trace how Gordin’s plays reformed Yiddish theater in America and brought the seriousness of Tolstoy, Turgenev and Shakespeare to Lower East Side stages. After a disappointing reception of his plays at New York’s Thalia Theatre in 1904, Gordin predicted that “Jewish theater in America has no future.” But he was wrong, and his own drama still has a role to play in that legacy.