Copywriters at the Gates 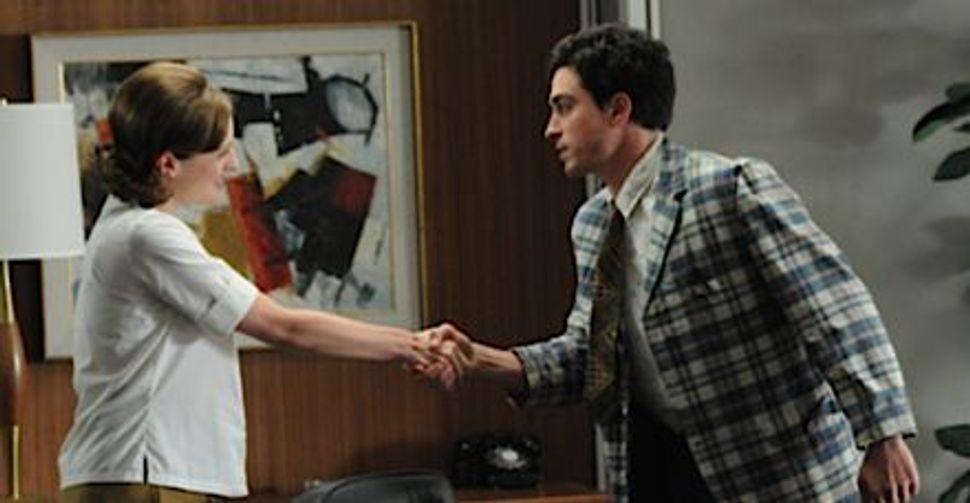 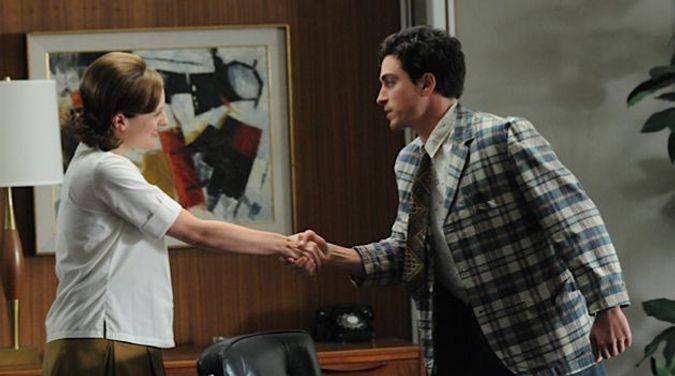 At the onset of the fifth season of the critically beloved AMC ad agency drama “Mad Men,” a new Jewish copywriter, Michael Ginsberg, becomes the bright creative light of the office, while Abe Drexler, a secondary character dating another copywriter, is outed as a member of the tribe by using the word “bracha.” Then the two men kibitz and eat Chinese takeout in the staff room.

This scene, as some other early episodes of this “Mad Men” season — whose final episode aired June 10 — felt like the beginning of “Mad Men: The Jewish Years.” Even in previous seasons, creator Matthew Weiner offered a parade of strong Jewish women as extramarital love interests for the ad agency’s creative director, Don Draper, from elegant department store heiress Rachel Menken to shrewd consultant Faye Miller. Guessing which characters were Jewish became a kind of pastime for viewers, explicit Jewish references their reward.

But such shtick, whether as text or subtext, was never the point. The Jewish storylines, taking place from 1960 to 1966, inevitably pointed to deeper questions about American Jewish and indeed, American, identity. What are outsiders’ responsibilities once societal gatekeepers let them in? When, if ever, can those outsiders stop viewing themselves as alien? And should they? Through characters like self-made man Don, secretary turned copywriter Peggy Olsen and the gaggle of golf-playing White Anglo-Saxon Protestants with whom they work, we witnessed the thrilling process of breaking into rarefied circles based on merit and guts, and the corrupting anxiety that follows when the break-in is complete.

Jews are far from the only group that has gone through that transition on “Mad Men.” The ad agency of Sterling Cooper Draper Pryce is a threshold for women in the workplace, for men without social pedigrees and, in the future, as the storylines intimate, for gay men and lesbians and people of color. “Mad Men” doesn’t study the move of these groups toward broad social equality; rather, it observes interpersonal dynamics in the hallways of elite society (and since those hallways remained largely segregated in the 1960s, the show’s treatment of people of color is more cursory than it could be, which is a major flaw).

As the fifth season began, the show’s writers plunked another new character, Ginsberg, down into those hallways. Roger Sterling, a partner in the agency and a quintessential WASP, had already gotten over his qualms about hiring a Jew: “Everybody has one,” he says, giving the go-ahead for Ginsberg to come on board. The new kid’s Jewishness is of the nebbishy variety: Ginsberg, many recappers and Tweeters immediately remarked, acts as though he’s walked into the advertising offices right out of a Woody Allen film.

Ginsberg has a pushy and unabashedly neurotic demeanor that disturbs not only his colleagues, but also some viewers who see him as a caricature. But throughout the season, his relentless drive and knack for the business challenges his colleague Peggy and their boss, Don, in the creative realm. And the audience never forgets his roots, even as he tries to obscure them himself. Ginsberg swears to Peggy in an interview that he has no family, but after his hiring, he arrives home to a dark apartment and receives a Hebrew blessing from his heavily accented immigrant father. In a subsequent episode, he avows to Peggy that he isn’t that man’s son; he’s been told he was adopted after being born in a concentration camp. He’d rather believe, Ginsberg says, that he comes from Mars, the literal embodiment of being alien.

This deliberate tinkering with his sad personal story, the demonstration of his creative brilliance, and the social brusqueness and iconoclasm that prevent him from being one of the crowd make Ginsberg an obvious comparison with the man Don used to be: born in impoverished rural America, stealing another man’s identity in the war to remake himself in a new image, talking and cajoling his way into Sterling Cooper and then ascending to the top. But the former outsider, who identified romantically with Jewish women, has stepped too far inside. Ginsberg is now the one knocking at the gates.

If Ginsberg is the new Don, he’s also replaced Don’s former protégée, Peggy, who is romantically involved with Abe, a countercultural Jew. In Abe and other secondary Jewish characters on the show, we see alternative avenues for Jewishness in America. Abe, who works for “the underground papers” and the anti-Vietnam War cause, eats pork without guilt. Instead of proposing marriage to Peggy, he asks her to cohabit with him. Abe’s outsider status is as much about his self-styled bohemian ways as it is about his background. He’s scorned by Peggy’s Catholic mother not simply for being Jewish, but for refusing to bow to social norms and make an “honest woman” of her daughter.

And then there’s Roger’s second wife and a former secretary at the agency, Jane Sterling née Siegel, who splits with her husband after a shared LSD trip, but poses as his still-happy spouse when the firm is trying to impress potential Jewish clients. It occurs to the viewer that Jane was a Jew working at Sterling Cooper long before Ginsberg’s time, but she didn’t flaunt it the way he does. In fact, through her discretion and assimilation she landed the WASP boss. Times have changed, indeed.

Jane advanced her socioeconomic status by identifying with the old guard, which tries to stand its ground against the influx of energized outsiders. Some embrace the changing times or use their privilege to fend off challenges. But many in this order seem to feel that there’s no dignified exit left, a fact shockingly demonstrated by the suicide of British partner Lane Pryce.

Don himself has entered a purgatory between the two realms — and his actions hurt people on both sides of the gate. His patrician attitude chases Peggy to another firm, where she’s more appreciated, and his egalitarian insistence that old-fashioned Lane, after making a mistake, humble himself and start over elsewhere precipitates Lane’s suicide. Don doesn’t understand that for some people, starting over isn’t a possibility.

Using Jews to epitomize the insider-outsider is hardly a new idea; classic American literature by authors like F. Scott Fitzgerald and Edith Wharton is full of loathsome Jewish characters not only fighting in from the margins and making the other characters sweat, but also standing up against the fossilizing decadence of the establishment. The difference in “Mad Men” is that Weiner spins that old alarmist rhetoric into a positive factor, or as positive as it can be in a landscape where the characters are all morally ambiguous.

And yet, there’s a warning embedded here, too: Weiner loves to romanticize his anti-hero characters and then pull the wool from our eyes to show the limits of empathy. Ginsberg, for his part, has scorn for Don’s new wife, Megan, a modern woman who isn’t inhibited by the strictures of a previous generation. “She comes and goes as she pleases,” he complains. But then again, so does he.

Sarah Marian Seltzer is a writer in New York and a contributor to the Forward’s The Sisterhood blog. Find her at www.sarahmseltzer.com.

Copywriters at the Gates