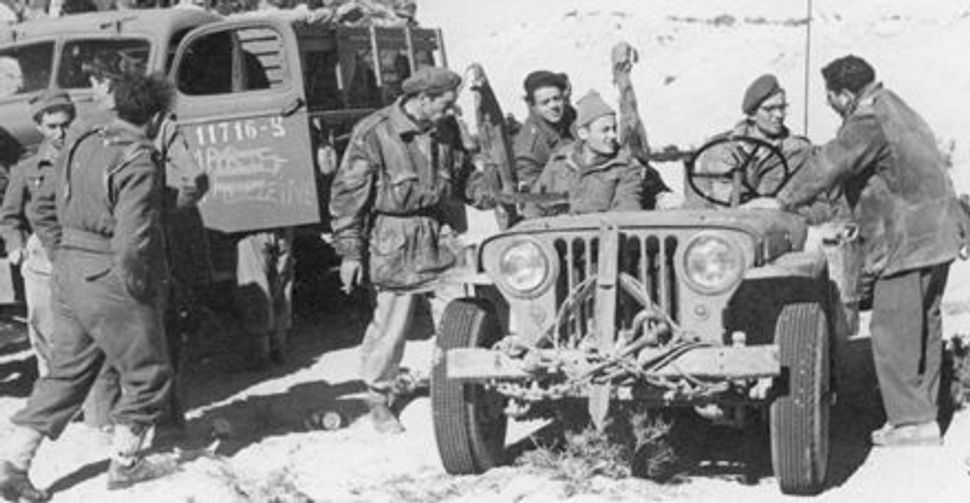 Image by Courtesy of The Palmach Archive 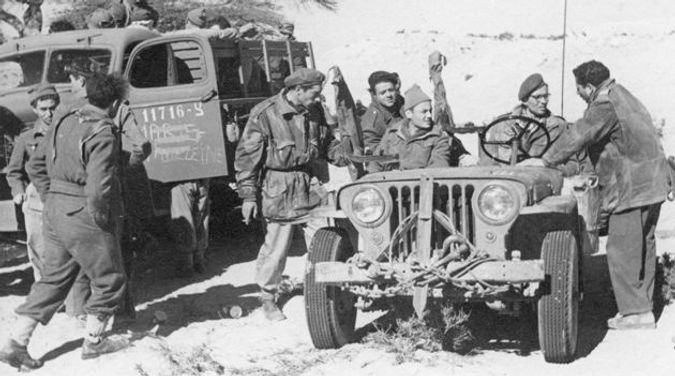 Patrol: French volunteers for the Palmach drive through the Negev in 1948. Image by Courtesy of The Palmach Archive

Another book on “the making of Israel”? It was a scant few months ago that Gershom Gorenberg’s provocative and timely book, “The Unmaking of Israel,” was visited on the Jewish body politic. Now comes novelist Hadara Lazar’s book, “Out of Palestine,” whose subtitle, “The Making of Modern Israel,” may gull and lull many a reader, but this reader was coddled out of his sleep after only a few pages.

“Out of Palestine” is a truly fascinating discussion of a period on which much ink has been spilled, yet this period is incompletely and insufficiently understood: the last years of the British Mandate in Palestine. There have been other fine books about the Yishuv, or the Jewish community under the Mandate. Tom Segev’s “One Palestine, Complete” and A.J. Sherman’s wonderful (and relatively unknown) “Mandate Days” are exemplars. But Lazar’s question is not the usual one of the political narrator —“What happened, and why”? Rather, it is, “What was it like to be there?”

Lazar relies on dozens of interviews with military, civilian and political actors from the Arab, British and Jewish communities to tease out a social, political and military history of 1940s Palestine. Almost the entire book consists of direct quotes, but there is enough historical interstitial tissue to connect the dots. The reader gets the sense of not only “What was it like?” but also of what happened during the years 1946 to 1948.

“Out of Palestine” is a relatively short book, but it is unusually comprehensive. Lazar begins with interviews of three members of leading Arab clans (how the author tracked down her interviewees, over a period of 25 years, is a fascinating story in itself), and ends, appropriately, with the last days of the Mandate, in May 1948. It does not end, however, with the shooting war leading to Israeli independence. The final chapter, which weaves together interviews with three British bureaucrats, tracks the death of British rule up to the very end, on May 15. Sounds boring? The narrative is spellbinding and ghostly at the same time, and sums up two decades of British rule: “I never felt like a stranger in an Arab house. I felt like a stranger in a Jewish house. I don’t know why,” one bureaucrat says. And — at the very end — “We simply vanished.”

Interviews with Arab political leaders and thinkers are cannily interspersed with those of British and Jewish figures. Lazar, careful always in her questions but pulling few punches (no mean feat!), is never condescending and is always respectful. Where she does insert herself in the discussion — Lazar often voices the questions she does not ask — she is never intrusive.

And what about Jews? The Jewish story of the last years of the Mandate, oft-told by historians, is truly spellbinding when it emerges from the mouths of the Palestinian-Jewish actors themselves, many of whose names we do not know. There is Rachel Eliachar from an old Sephardi Jerusalem family, socially situated between the Arab and Jewish Ashkenazi elite; lawyer Ya’akov Shimshon Shapira, a leader in the tenacious defense of the ships that brought illegal immigrants to Palestine; German-Jewish scholar Wolfgang Hildesheimer, who was comfortable in Anglo-Arab circles, and, most exotic, Nahum Nimri, who was active in the radical Lehi, or Stern Group, which perpetrated hundreds of violent attacks against the British.

Better known were officials like Yehoshua Palmon of the Jewish National Fund, who was active in land purchases on behalf of the Yishuv; Yitzhak Ben-Aharon of the Mapai political party and Histadrut labor federation, who was a player in Yishuv political and military affairs, and military leader Shimon Avidan, who played important roles in both the pre-state Palmach force and the newly minted Israel Defense Forces in the 1948 war.

Lazar is not always sure-footed when it comes to historical detail. The Palmach was not simply a function of the Haganah paramilitary force, as Lazar suggests; rather, it came out of deep ideological struggles between the regnant socialist Mapai party, which generated the Haganah, and the more radical leftist Ahdut Ha-Avodah and Hashomer Hatzair kibbutzim, from which emerged the “Plugot Machatz,” or “Striking Forces” of the Yishuv — the Palmach. This point is more than mere nuance; it tells us that the Jewish community in Palestine — in large measure derived from the Eastern European Jewish world — was all about ideology and “movement,” and that the institutions of the Yishuv derived from these struggles. This dynamic, important to the understanding of the Jewish presence in Palestine, is missing from “Out of Palestine.”

Further, Lazar’s otherwise engrossing interviews with Arabs could have been more enlightening had the author told us about the crucial significance of family, clan and “tribal” loyalties in the Arab world, both Muslim and Christian. In an early chapter (and one of the best in the book), her narrative of the Nashashibi and Husseini families — key players in the struggle over Palestine both within the Arab community and with the Jews — would have been more intelligible had the author provided some of this context.

But “Out of Palestine” is more than a congeries of anecdotal memoir. The book shows us how much of the “making” of Israel had its foundation in the activities and interactions of the three actors —Arab, Englishman, Jew — who became entrenched enemies of one another. Lazar’s interviews transform the tale into history, and she winningly brings the history to life.

Jerome A. Chanes, a Forward contributing editor, is the author of four books on Jewish history, public affairs and the American Jewish community.