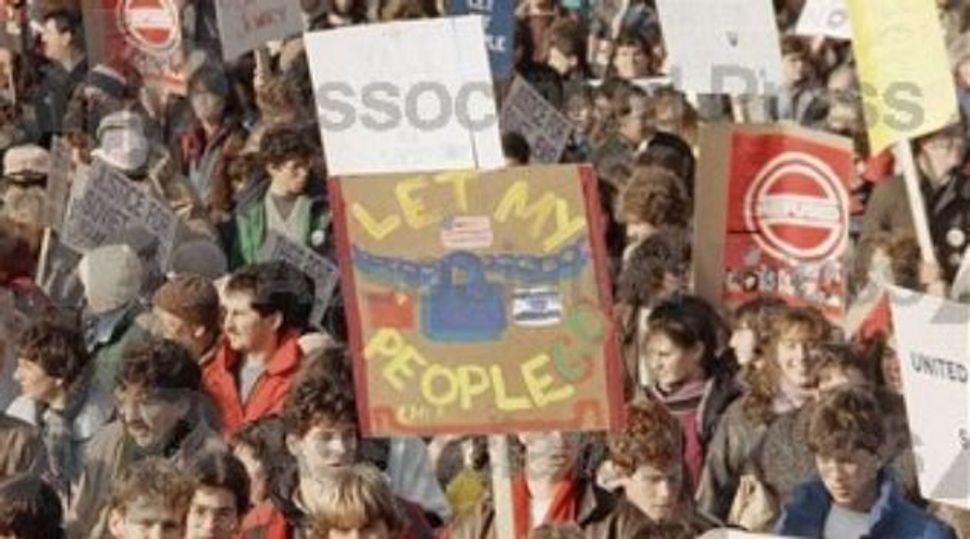 Protesters gather in Washington, D.C. in 1987 to draw attention to the plight of Jews in the Soviet Union. Image by AP Photo

My desk at home, which I commandeered from my husband, is an imposing piece of furniture. Fashioned out of mahogany and ornamented with brass fittings, it also boasts a leather top, which is covered by a protective layer of glass. A wide array of mementos are wedged in between the leather and the glass: A photograph of my husband being interviewed by French television at a protest march in Washington, D.C., a copy of our wedding invitation and an $8.00 ticket stub that dates to 1971.

Once a buoyant red, that ticket stub has faded over time, along with the reasons for putting it under glass in the first place. But recently, in the wake of the 25th anniversary celebration of and concomitant discussions about the 1987 Rally for Soviet Jewry, this item came roaring back into my sights. What it commemorates is “Freedom Lights for Soviet Jewry,” a public gathering held in Madison Square Garden more than a decade and a half earlier, in December 1971, to publicize the increasingly dire conditions under which the Jews of the Soviet Union lived.

Timed to coincide with Hanukkah, the festival of lights and of Jewish political emancipation, the event brought together a mix of politicians and statesmen, performers and recent Soviet Jewish emigrés who treated the audience to a medley of song, speeches and political theater.

Freedom Lights was orchestrated by a small, and proudly independent, group of Upper West Side 20somethings. Influenced by the civil rights movement and fueled by a strong sense of responsibility, its members wanted, as Gilbert Kahn, one of their number, recently put it, “to catapult the issue forward.” In between securing the participation of such leading lights as Gerald Ford, then House Minority Leader; Bess Myerson, the former Miss America turned NYC Commissioner of Consumer Affairs; former U.S. Attorney General Ramsey Clark, and Roy Innis of the Congress of Racial Equality, and persuading entertainers such as Theodore Bikel to perform for a nominal fee or for no fee at all, the group also took out a series of advertisements in The New York Times and other press outlets, whose bold, innovative, unusually stylish graphics and pull-no-punches prose caught the eye.

“Here are 2 reasons out of 3 million to be at madison square garden [sic],” read one such ad, which personalized the situation of Soviet Jewry by featuring actual photographs of the well-known refuseniks, Sylva Zalmanson and Arkady Shpilberg — or more to the point, of his young children who stood in for their father. “be there! speak out!”

Committed to going public with the ways in which Soviet Jews like Zalmanson and Shpilberg were discriminated against and even imprisoned, the Freedom Lights committee ran afoul of the established Jewish community, which, at the time, preferred behind-the-scenes diplomacy to confrontation. Who authorized this group of young Turks to speak on behalf of Soviet Jewry, it wanted to know. Which was precisely the point: The grassroots was clamoring to make itself heard.

The tactics of the Freedom Lights committee bore fruit, drawing 20,000 people from across the broad spectrum of American Jewish life. Filling Madison Square Garden to “overflowing,” according to The New York Times, they came not to dance in the aisles or to root for the Knicks but to express solidarity with Soviet Jewry.

Eager to build on the momentum and sustain the good will generated by the event, the group took out an advertisement a month later, which it framed as an open letter to President Nixon. The text opened with this bold statement: “President Nixon: One month ago, 20,000 Americans made history.”

It continued: “On December 13, 20,000 Americans from 7 states and scores of cities massed in Madison Square Garden in an act of solidarity with the 3,000,000 Jews of the Soviet Union.”

“20,000 Americans gathered to support Soviet Jews in their struggle for the right to free emigration and to live as Jews in dignity…”

“20,000 Americans heard Senator Henry Jackson declare: ‘Let us ask the Russians to loosen up on their emigration policy and stop this cultural genocide. America must be a hard bargainer for freedom.”

And, it concluded rousingly, with this: “Sylva Zalmanson and other Soviet Jewish prisoners of conscience have heard. Soviet leadership has heard. People concerned with human rights everywhere have heard. Mr. President, your voice could be the most important one of all.”

Despite its ringing language and political savvy, chances are you won’t find many references to Freedom Lights either in history books or recorded public discourse about the Soviet Jewry movement. For reasons that baffle and disturb those who helped to bring it about, Freedom Lights is barely a footnote. It deserves a better fate. In its wake, the American Jewish community increasingly adopted a series of tactics, from Solidarity Sundays to rallies, which placed a premium on public protest.

Freedom Lights also turned out to be a transformative personal experience for those who worked behind the scenes, underscoring the power of individuals at the grassroots to effect change. How do I know this? Because, dear reader, I married one of the members of the organizing committee. It is his ticket stub for seat C3 that has pride of place on my desk.