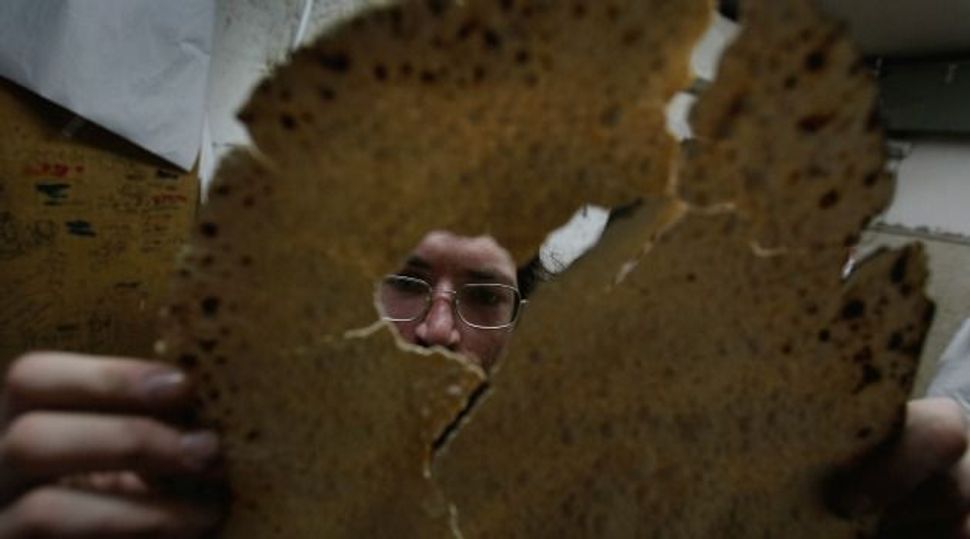 Unleavened Melancholy: At this time of year, sometimes it?s easier to ask the Four Questions than to answer them. Image by Getty Images

Is a question profound if it has no answer? I reflected on this banality the morning after another draining Passover Seder while shuffling — fashionably late and slightly hung over — to a synagogue I found hopeful in the past. In my usual house of worship I would be recruited to lead the service in song. And while fiercely nostalgic, I was also bone-tired and weary with the sound of my voice. Throughout the night and into the early morning, I had declared platitudes in a tone resonating paternal aplomb. Now that assuredness was gone. I was desperate for inspiration and hoping to find it anonymously, among unfamiliar pews.

Lasting until 2 a.m., this year’s paschal theater had fleeting moments of tedium but was characterized by enchanting instances of story, melody and ritual. Ancestral hymns were chanted, contemporary adaptations improvised, the past made alive with solemnity and cheer. My teenage students had helped us bake matzo, and my family and I prepared maror, haroset and knaidlach. Each of my five children and four adult guests was attended to. Even my adolescent (“I don’t know, I don’t care”) son expressed satisfaction. The Exodus was celebrated. Tradition was upheld. The setting was lavish, opulent, grand.

So why was I disconsolate, trudging to a foreign congregation in quest of affecting holiday spirit? Why did I — a rabbi to whom others turn for encouragement — have to salvage a festival that was but hours old, a festival I had anticipated for weeks? Why did this celebration of freedom create such a sensation of dread?

My melancholy was as acute as it was unseasonable. Liberty mingled with pollen in the air, homes were leaven and dust-free — and there I was, dragging my feet like a shackled slave. While neighbors, it seemed, moved buoyantly along, my movements were lifeless, weighted with the burden of those infuriating Four Questions. This year’s recital did not bode well. As my children posed their questions, I was disturbingly aware of a lack of convincing answers. Now, minus the safety of last night’s pageantry, I imagined each early spring bird mocking my apparent ignorance.

“Making Pesach” was a rite I never wanted. I was — I still am — complacent at my father’s side. I would prefer he dole out the requisite amounts of matzo and maror, conceal decoy afikomens, brandish gleaming spears of radish (why not potato?) with parsley, straighten felled goblets of viscous Manischewitz. I would rather pose the Four Questions than be made to answer them, rather respond to tradition than be saddled with the burden of preserving it.

My father, a Manhattan entrepreneur, channeled holiday spirit unabashedly, his narrative compelling for its exuberance and not its profundity. Seders lasted well past defensible hours, and I do not suppose his performance was at all rehearsed. In Jerusalem, where as a rabbi I coax visiting American teenagers toward religiously inspired lives, my interventions are designed to elicit the same spirit as my father’s but are, I surmise, less effective. My demeanor is more contemplative — a manner that sometimes yields skepticism and self-doubt.

Passover presents a distinctive challenge. Meant to present a thematic overview of the Exodus, the Seder cannot be experienced as such without creative exegesis. The Seder is symbolic, imaginative, childish. The Haggadah is dense, enigmatic, grown-up. Our holiday’s message is vague and embedded in an innocuous medium of rhyme and imagery. Questions raised by the text often seem rhetorical, and scores of Seders have left more uncertainties than resolutions.

At this year’s feast the skeptic in me was insistent, poisoning the performance with invisibly potent scorn. On this Night of Differences, I was overwhelmed by its utter sameness, by recurring exile, by sorrow, by unceasing pain. I found the text deceiving, and had no energy for charades.

Even the nostalgia was tainted. When calling attention to Bubbe M’s crystal saltshaker, I could not ignore her legacy of family discord. Zayde L’s satin cantor’s hat. which I wear to the Seder in his memory, brought to mind his not-so-subtle obstinateness. Zayde S’s colored-glass decanter became a reminder of his poverty-induced immigration to New York, where I was reared, from British Mandate Palestine. When acknowledging Bubbe J’s tablecloth I recalled her pervasive sadness. Most troubling, Bubbe B’s wartime silver rehashed our family’s recent bout with genocide and evoked 6 million misgivings. My tradition, it seemed, raised more questions than it answered.

Then along came Hallel, the resonant psalms of thanksgiving, and Nirtza, its concluding refrain, when alcohol-laced fatigue activated latent yearnings, and tears flowed, salty and free. In an instant, whatever meaning and magic were sacrificed on the altar of rationalism were breathed alive with the elixir of sentimentalism. Like my father, I sobbed to the expectant Chasal Siddur Pesach and to the unrivaled proclamation “leShana haBa’ah beYerushalayim” — “Next year in Jerusalem.” The Seder was suddenly uncomplicated and, for a suspended moment, meaningful. For eight unworried days, I could live free of deciphering the undecipherable, of explaining the inexplicable. Passover became a festival of questions, a celebration of my ability to wonder and to want.

In his “Letters to a Young Poet,” Ranier Maria Rilke likens the mystery of questions to “locked rooms” and to “books written in a very foreign tongue,” to be not avoided, but loved. To Rilke, patience “toward all that is unsolved in your heart” is virtuous, “and the point is, to live everything. Live the questions now.” Instead of honoring its questions, my Passover Seder had, until then, focused on resolving them — for me a fruitless endeavor. The Seder’s stirring conclusion moved the experience from my head, where it cast about, to my heart, where it belonged.

Rilke suggests a philosophy in which questions can be more sustaining than answers, a world defined as much by negative space as by positive. For a cherished moment I was so satisfied — thirsty for answers, yet patient enough to await them. More than resolutions or zeal, my contribution to tradition would be to make its questions matter. Then, with the guests long gone and the children tucked away, my characteristic self-analysis took over, and by the time I peeled myself out of bed too few hours later, I was devastated. That morning, the warming lessons of Nirtza were a distant memory, and I trudged to synagogue, pensive and alone.

When seeking inspiration in synagogue, I was relying on a time-honored tradition that is more spiritual than musical. It is not harmonic structure I find calming, but an association of melody, meaning and memory that, when married just right, induces an emotion inimitable. In synagogue the tension between questions and answers slackens, the distance between here and there shortens, the limitation of knowledge recedes. Or so they say.

The cantor was good. Within seconds of his assuming the podium I felt relief. And when he sang, I closed my eyes and recalled the last time with my grandfather. The lesson of Nirtza warmed my core, and my garrulous reasoning was silenced. I was able again to question without feeling forced to answer. For a fleeting moment I had no tensions, and Passover was beautiful forever.