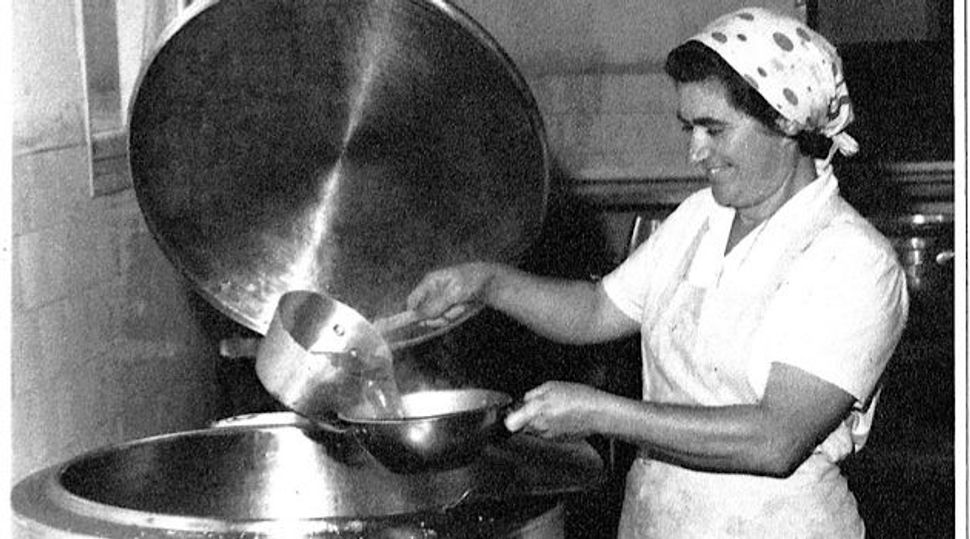 What?s for Dinner: A kibbutz member helps prepare a meal at Kibbutz Mefalsim in 1960. Image by Courtesy of 'Chadar Ochel'

A recipe book collected from the now-silent dining rooms of Israel’s kibbutzim sounds like a bad joke, a snide swipe at a relic of the old Israel from a couple of Tel Aviv hipsters. This book’s recipe for French Fried Potato Quiche and references to rubber chicken would fit right in. Yet Assi Haim and Ofer Vardi’s new cookbook “Chadar Ochel,” meaning “dining hall,” is anything but.

With the warmth and affection of people visiting familiar but distant relatives, the authors go in search of the Chadar Ochel, the communal dining room, the “beating heart” of the kibbutz, its physical and social center. They traveled the country, visiting dozens of kibbutzim, collecting hundreds of stories, photographs and close to 60 recipes. Their aim was not to compile another community cookbook, but rather to collect what they could still find of a now-fading institution, before it is too late.

In its heyday, before commercial caterers and differential wages came along, the dining room was the essential focal point of the kibbutz. Its long tables were one of the most iconic images of Israel, instantly recognizable at home and abroad.

The first permanent building in a new settlement, the dining room often dwarfed the modest members’ housing and the wide lawns that encircled them. According to Haifa University sociologist Oz Almog, the architecture of the dining room was a statement, a monument to the communal, modern and secular values of the kibbutz movement. It played multiple roles in the life of the community. Without any means of cooking at home, there was no alternative to eating together. It was also the arena in which communal dramas were played out. In the great Mapai-Mapam schism of the early 1950s over the extent of Israel’s pro-Soviet orientation, which eventually resulted in several kibbutzs physically splitting into two, rival groups ate in roped-off areas for fear of ideological contamination.

Against this background, the food itself might seem secondary. It was frugal, simple and with a strong influence of Ashkenazi culture, notes Israeli celebrity chef Jonathan Roshfeld, who grew up on Kibbutz Ruhama in the Negev. There wasn’t much for the Moroccans, the Algerians or the Tunisians to enjoy in the early years, he added. In those years, food was scarce in any case, although today’s enormous “Israeli breakfast” of salads, cheeses and eggs are typical of breakfasts offered in kibbutzim from the 1950s where access to locally grown produce ensured better food than that of city-dwellers whose consumption was rationed.

The book wisely steers clear of these staples, though, and finds some of the more unusual dishes and the stories behind them, which livened up the otherwise mundane cuisine. In the collective environment of the kibbutz, they took the place of a grandmother’s or mother’s famed recipe for brisket or birthday cake. Often, they were a taste of home for immigrants, or a link to the past.

Take, for example, the steamed pudding of Kibbutz Beit Hanassi. When its British immigrant members hankered for home, they dreamed of the kind of pudding dished up in a thousand school canteens, smothered in custard. The only problem was finding a receptacle in which to cook it. For weeks they ate tinned peas until the huge cans were empty and reused as steamers.

On Kfar Masaryk, just over the road from Akko, the dining room faced competition from the local Arab hummus joints until the cooks decided to master the recipe themselves. Near Haifa, on Kibbutz Ma’agan Michael, an early Canadian volunteer’s determination to use up Friday night’s leftover challah just as he did at home still has volunteers up early on Shabbat morning, frying hundreds of slices of French toast.

A hint of larger Israeli stories are at play in the book, too. Kibbutz Kinneret’s famed teigelach, the honey-drenched cookies beloved by Litvaks, were parceled up in a Red Cross package, intended to reach one of its members who had fallen into Syrian captivity during the 1973 Yom Kippur war. What better way to guarantee that he would know the food came from home?

Sadly, now, as the kibbutz morphs in a new Israel, the huge buildings stand largely silent.

In truth, the communal dining room faced challenges from its earliest days, starting with a popular Israeli household item, the kumkum or electric kettle. Once members could make instant coffee at home, they began to do so. Surreptitiously at first, and then more openly, members’ lives moved towards their own homes, and away from the center, but some of these recipes endured.

The traditional kibbutz has mostly passed away, but it is not yet a piece of history. “Chadar Ochel” is neither a glossy celebration-of-life album, a practical how-to guide for the aspiring kibbutz cook, nor a somber sefer zikaron, a catalog of death. Weaving the contemporary with the historical, it captures both the vulnerabilities and the essential resilience of the kibbutz as idea and as reality — and places food at its heart.