What ‘Girls’ Could Learn From the ‘Good Wife’s’ Wife 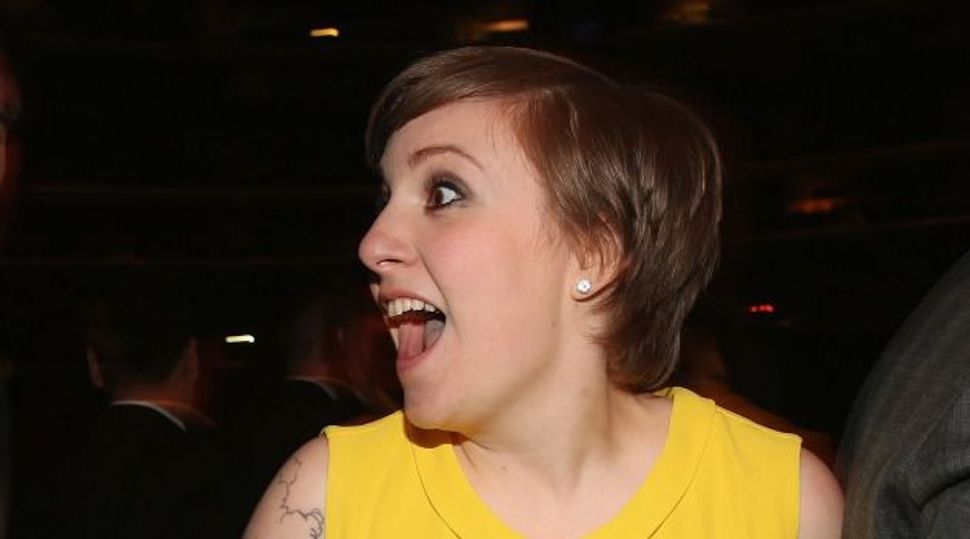 Lena In: Lena Dunham?s ?Girls? seem to lead lives filled with humiliation. Is this all they?ve learned from the generation represented by television?s ?Good Wife?? Image by Getty Images

Two of my favorite television shows ran on Sunday nights this past winter — “The Good Wife” on CBS and “Girls” on HBO — and because I didn’t have time on Sundays, I tended to catch them on demand on Monday nights, back to back. On the surface, these shows don’t have much in common; but dig a little deeper, and you’ll find surprising similarities. Both put women (strong Jewish actresses, in the case of Lena Dunham and Julianna Margulies) front and center.

Both are created by Jewish women (Dunham created “Girls” and often writes and directs the episodes; “The Good Wife” is the brain child of Michelle and Robert King, a married couple; Michelle King is Jewish). Other writers have covered just how Jewish these shows can be, but what interests me even more is that women are the stars, writers, creators and producers. And as such, they show us, and comment on, women’s experiences.

Hannah Horvath, the lead in “Girls,” is in her mid-20s; Margulies’s Alicia Florrick is in her mid-40s. Yet at times, I’ve felt like the two shows are talking to each other. The results of such cross-generational chatter can be entertaining and informative, but also disturbing.

Both shows announce their subtext in their titles. “Girls,” if you haven’t seen it, is about a group of four upper middle-class neurotic but charming 20-somethings in Brooklyn who are trying to figure out what they want their lives to be. When I was in college in the late 1980s, even 18-year-olds insisted on being called “women,” but these girls are not women and don’t want to be called that; they are the postfeminist generation. Some of the comedy and the pathos in the show comes from that girlishness.

“The Good Wife” is about a political wife and stay-at-home mom who has been humiliated by scandal (her husband, Peter, slept with a prostitute and was hauled off to jail) but decides to stand by her man. With her husband away, Alicia has to support the family, and she dusts off her law degree to start a new life as a first-year associate at a Chicago law firm, Lockhart Gardner.

The public embraces her and refers to her as “St. Alicia” for staying with Peter, but she is more complicated than that; she wants to be moral, but often her actions can be seen as going either way, particularly as she becomes more ambitious at the firm. A wife and mother cannot be a girl — she has too many responsibilities for that. But must she always be good?

Both shows, in their respective ways, break new ground. “Girls” does so in its level of realism about this current 20-something generation and their sexuality and economic challenges, and also it’s the first show to feature a protagonist who’s comfortable with her body. (Hannah’s not a fat protagonist, which has been done already; she’s just a regular-size, imperfect woman, which somehow feels more radical.)

“The Good Wife” stands out in the way it uses technology and the law in layered plots that go far beyond the predictable legal procedural. Lockhart Gardner has handled cases involving everything from online currency to violent video games to a “rape app.” To quote The New Yorker’s Emily Nussbaum, “‘The Good Wife’ is to the digital debate as ‘The Wire’ is to the drug war.”

Both shows do a lot with clothes. Diane Lockhart (Christine Baranski) dresses impeccably, in couture or designer fare. Alicia wears a variety of tailored suits. These are aspirational outfits, the kind most women dream of wearing but can’t afford. Just like in “Girls,” this is an upper middle-class world, but one where characters work incredibly hard to get what they want, even if they’re not always honest. On “Girls,” kooky is more the order of the day; the clothing is “anti-aspirational.” Hannah, in particular, dresses in costumes — skorts (shorts as a skirt), see-through halters. And when she does put on a dress, it is often a short one with a big dirndl skirt, more the clothing of a little girl than of a grown woman. Perhaps when you’re in your 20s, you can wear anything and get away with it, but she does want to enter the working world, even the artsy one in Brooklyn. Even if Hannah has no interest in wearing someday Alicia’s corporate armor, she might, eventually, have to consider putting on pants.

It is perhaps unfair to compare a big-budget network show that appears every week for an entire season to an HBO show that runs in 10-episode segments. But “The Good Wife,” in the issues it tackles, feels more like a cable show, and “Girls” has gotten so much critical attention that, at this point, it is more significant than a half-hour of television might suggest. Critics and bloggers continue to write about the show’s frank portrayal of awkward, even degrading sexuality. Dunham is not afraid to show her body; all for the good, I say, because women have gone generations without seeing a normal-size female on television. But it’s in the show’s portrayal of eros, or the lack thereof, that I lose my way a bit and start to feel my age.

Both shows devote a lot of time to how characters are getting it on. Alicia, in the third season, sleeps with her boss, Will Gardner (Josh Charles), and her friend Kalinda Sharma, the firm investigator (Archie Panjabi), is openly bisexual and sleeps with a variety of characters, men and women, all of whom she also uses to get information. [For all the fuss about the nudity and graphic sex on “Girls,” and the way Dunham’s characters talk about acquiring experience, there are nothing but heterosexual experiences with other Brooklyn hipsters. When Hannah’s college boyfriend of two years turns out to be gay, Hannah is horrified and feels betrayed, though, as he points out, the answer was always right in front of her but she was too self-absorbed to notice.

And yes, the malfunctions and humiliations on “Girls” are often closer to the truth for a lot of women. But all the time? Really? Because the only people having any pleasure on this show are men. The women look either uncomfortable, horrified or, in the case of Marnie Michaels (Allison Williams) — after she has sex with a downtown artist who makes her stare, the entire time, at a plastic doll stuck on his bedpost — on the verge of laughter.

Is this what the sacrifices of past generations of women have wrought? I lived in New York when I was in my 20s; I was broke, artistic and made bad fashion choices, but I don’t remember having that much bad sex. One’s 20s are a time when sex is about the only thing that seems to work (nobody’s taking Viagra or worried about the baby in the next room). Dunham has purposefully written girls that never ask for much from their boys: They crave experience more than they do intimacy or pleasure. They don’t seem to know their own bodies, and when they do ask — as is the case with Adam’s new girlfriend this season, who requests that he not call her a whore while they do it — their requests go ignored.

Maybe it’s a process. Maybe you have to pass through the humiliation of those 20s to get to the confidence of the 30s, 40s and 50s. In their personal lives, the women of “The Good Wife” [ask for what they want from their partners. That doesn’t mean the interactions are trouble free, but personal empowerment is built into a show about a disillusioned political wife who gets her second act in American life.

Should a bunch of overworked, middle-aged lawyers be having a more erotic time of things than half-dressed, underemployed 20-somethings in Brooklyn? In an essay she wrote for The New York Review of Books, Elaine Blair says “Girls” is showing us the full range of possibility: That there’s more to a romantic life than just a numbers game and animal pleasure on the one hand, or a long search for a spouse on the other — and we can justify our freedom only by giving full attention to the human relationships formed by sex, even when those relationships are brief and strange. Okay, but somewhere along the way, a girl needs to get more out of her sex life than just humiliation and another story to tell her friends. At some point she needs to grow up and speak up about her own desires.

Maybe what those girls really need is a good lawyer.

Sharon Pomerantz, author of “Rich Boy,” is at work on her second novel.

What ‘Girls’ Could Learn From the ‘Good Wife’s’ Wife