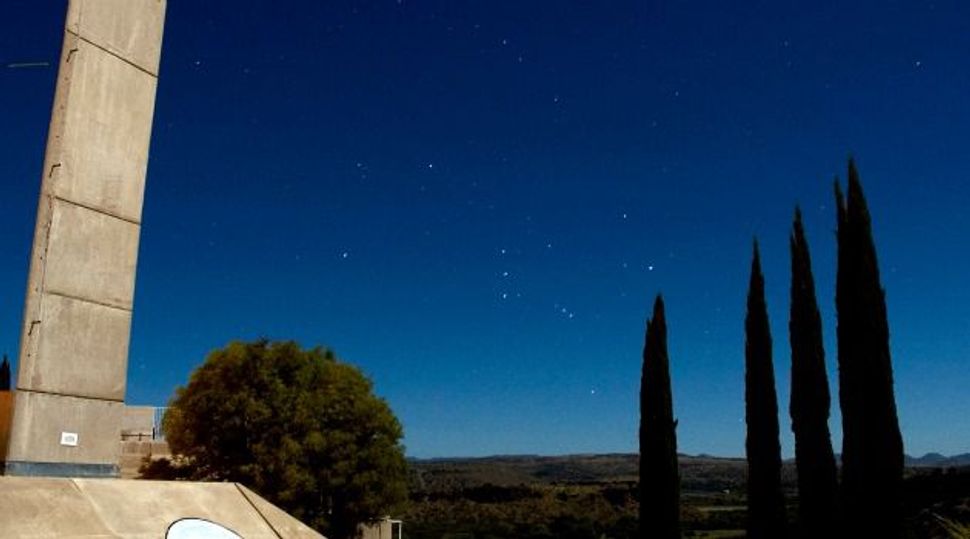 Rising Stars: Orion, seen here over the Arizona desert, has also been called ?the Hunter? and ?the Warrior.? Image by Getty Images

“I’ve been wondering about the origin of the Hebrew name of the constellation Orion, k’sil. Is it Babylonian? Is it related to the Hebrew month of Kislev? I’d love to find out if the name was a Jewish way of disparaging the accepted mythology of the times.”

Mr. Manory is thinking of the fact that the Hebrew word k’sil also means “fool,” as in the verse in Proverbs, “A wise son makes a glad father, but a foolish son [ben k’sil] is a sorrow to his mother.” The constellation called k’sil, on the other hand, is mentioned in Isaiah, Amos and Job and has indeed, as Mr. Manory observes, been identified since antiquity with the group of stars also known as “the Hunter” or “the Warrior” and called Orion by the Greeks. Our earliest source for this understanding of k’sil, most likely based on a reading transmitted by Jewish tradition, is the Septuagint, the Greek translation of the Bible executed by the Jews of Alexandria in the centuries before the Common Era.

Don’t go looking for Orion now, because it’s a constellation that appears in the southern skies of the Northern Hemisphere in the winter months. Then, however, you’ll have no trouble finding it, because it’s one of the most brilliant and spectacular star groups in the sky. As described by the British astronomer E. Walter Maunder in his “The Astronomy of the Bible,” a still valuable work despite being more than 100 years old: “Four bright stars, in a great trapezium, are taken to mark the two shoulders and the two legs of a gigantic warrior; a row of three bright stars, midway between the four, suggests his gemmed belt; another row of stars, straight down from the center star of the belt, represents his sword; a compact cluster of three stars marks his head.”

Modern scholars have tended to agree with the identification of k’sil with Orion for a number of reasons. One is that in all but one of its biblical appearances, k’sil is mentioned together with the stars called kima, which are almost certainly the Pleiades (in the ancient Semitic language of Ebla, a site in northern Syria where a wealth of cuneiform tablets was excavated in the 1970s, the Pleiades are known as kamatu) and of which it is a constant companion. In addition, in the second-century C.E. Christian Syriac translation of the Bible, k’sil is rendered as gavra, “the Mighty One,” which corresponds in both sound and sense to the Arabic term for Orion, al-jabbar. Gavra and jabbar are also close cognates of the Hebrew gibbor, a word that first appears in the Bible in Genesis, where we are told that the legendary figure of Nimrod “was the first on earth to be a mighty man [gibbor]. He was a mighty hunter before the Lord.” And intriguingly, ancient legends dating at least as far back as seventh-century Persia connect Nimrod with Orion and even call the constellation by his name.

Nimrod is a negative figure in Jewish legend, the supposed builder of the Tower of Babel, a polytheist persecutor of Abraham for believing in only one God, and a rebel against God who wishes to usurp His place. He has also been connected by scholars with the Babylonian god Marduk, with whom his name shares three of its four consonants. Can it be, as Mr. Manory proposes, that giving Orion a name meaning “fool” was a jab at both Nimrod himself and at ancient Babylonian mythology? Was it an ancient Israelite way of saying what later generations of Jews would certainly have agreed with — namely, that only a heathen would admire a big, strong, dumb hunter and promote him to a place in the heavens?

It’s a tempting but almost certainly false theory, the refutation of which lies in the answer to Mr. Manory’s second question. That’s the one about k’sil and Kislev, the Hebrew month, roughly corresponding to December, in which the holiday of Hanukkah falls. As many of you no doubt know, nearly all our Hebrew months bear Babylonian names, which were brought back by First Temple exiles returning to Jerusalem in the time of Ezra and Nehemiah. A cursory comparison makes this clear: Starting with springtime, the 12 Babylonian months were Nisanu, Aru, Simanu, Dumuzu, Abu, Ululu, Tisritum, Samna, Kislimu, Tebetum, Sabatu and Addaru, while the Hebrew ones are Nisan, Iyar, Sivan, Tammuz, Av, Elul, Tishrei, Heshvan, Kislev, Tevet, Sh’vat and Addar. Thus, the Babylonian month from which Kislev took its name was Kislimu — and Kislimu was the first month of winter, when Orion was high in the sky and at its shiniest.

The accepted Babylonian name for Orion was mulsipa zi an na, yet it would be extremely unlikely for the phonetic similarity of Kislimu and k’sil to be a coincidence. Probably, the stars took their Hebrew name from the month; possibly, it was the other way around and there was a now unknown Babylonian name for Orion from which the word Kislimu derived. Either way, though, the constellation’s name has nothing to do with the fool of Proverbs — that’s strictly a latter-day exegesis.