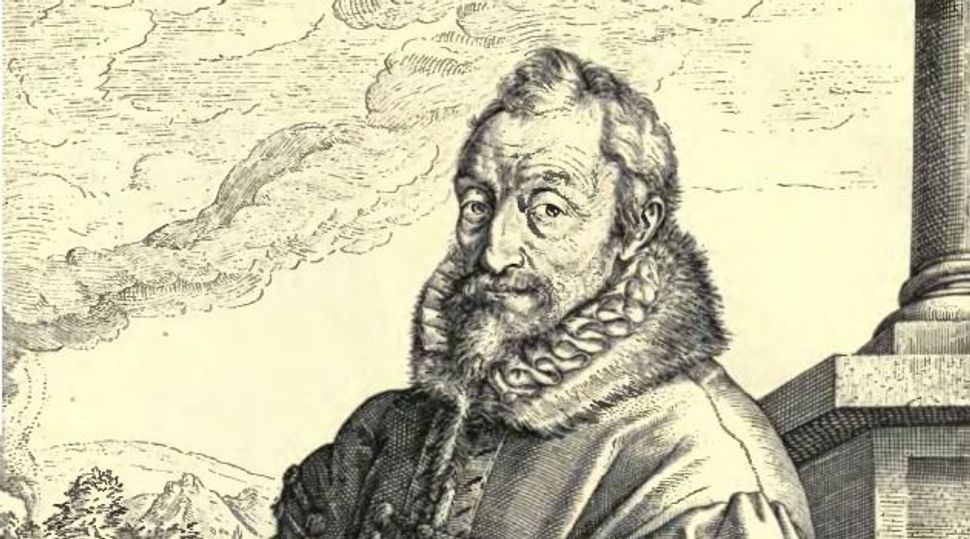 All the Jewish Texts That Are Fit To Print: Though he was a Christian, Christopher Plantin published many Hebrew works. Image by WIkimedia Commons

“On the front cover of the book is the French inscription Hait on le mal. I assume this means ‘We hate evil’ or ‘People hate evil.’ Would you have any idea why that is inscribed on the cover of this book? Might it be a Catholic imprimatur or something like that? I imagine the book may have been rebound at some point during its 400-year history, so it is possible that the cover is from a later time.”

Most likely, whether the inscription on the Bible’s cover is Plantin’s or someone else’s, it means “Let one hate evil” or “Hate evil.” It is certainly not a Catholic imprimatur, though Plantin was indeed licensed to print his Bible, together with other religious texts, by the Netherlands’ ruler King Philip II of Spain in the name of the Catholic Church. Rather, the words appear to be taken from Psalms 97:10, which reads in its King James Version: “Ye that love the Lord, hate evil; he preserveth the soul of his saints; he delivereth them out of the hand of the wicked.” In its 16th century and subsequent French versions, the “hate evil” of this verse is haïssez le mal, with the verb in the second person plural imperative as it is in the Hebrew original, while here it is in the third person singular. Perhaps hat on le mal served as a family motto, in which case it was almost certainly not put there by Plantin, who had a Latin motto of his own — Labore et Constancia, “By Labor and Constancy.”

Mr. Glaser is probably right that Plantin printed his Hebrew Bible mainly for Jewish clients; despite the growth of scholarly Christian interest in Hebrew in the 16th century, it is doubtful whether he could have turned a profit by selling to Christians alone. Yet there is something odd about the first and last pages of his Bible, which Mr. Glaser has emailed me scanned copies of. They make me wonder.

Both pages are entirely in Hebrew. The first bears, in large square letters, the title “The Five Books of the Torah,” followed by, in smaller Rashi script characters: “Meticulously printed [nidpas im rav ha-iyun] by Christophoros Plantin, may his Rock and Redeemer preserve him, in the year 333 by abbreviated count, here the [sic] renowned city of Anverse.” “Anverse,” printed in large letters again, is today’s Anvers, the French name for Antwerp.

This Hebrew seems to be the work of a Jew. Plantin himself was no Hebraist and no Christian would have been likely to abbreviate, as Jews were wont to do, 5333 as “333” or to use a phrase like “may his Rock and Redeemer preserve him,” yishmerehu tsuro ve-go’alo, indicated by the abbreviation yod-tsadi-vav. And yet the Hebrew is imperfect in two places that cast doubt on the knowledge of its composer: rav ha-iyun should have been rav iyun, without the definite article ha-, and “here the renowned city,” po ha’ir ha-mehulala, should be po ba’ir ha-mehulala, “here in the renowned city.”

The last page has at its top the final verses of Chronicles, the Hebrew Bible’s concluding book, followed by a peroration that begins: “The End, Praise be to God, Creator of the World.” (In Hebrew this is the rhymed tam ve-nishlam, shevaḥ l’el borey olam.) It then continues: “Completed this 20th day of the month of Elul in the year 5533 by abbreviated count, at the print shop of Christophori [sic] Plantin, here [again without the “in”] Anverse the renowned city, under the reign of Philip, the great king of Spain, may his majesty be exalted [yarum hodo — Hebrew initials yod-resh-heh], who licensed the printing of this book.”

Once again we have a strange combination of seemingly learned Hebrew with grammatical mistakes — the grossest of which is the reference to Philip as melekh gadol s’farad instead of melekh s’farad ha-gadol. An English equivalent might be calling him not “the great king of Spain,” but “great king Spain.”

I don’t know quite how to account for this. Can it be that these Hebrew addenda were actually composed by one or more Christians who knew Hebrew fairly well but not well enough? Or were they the work of Jews who did not know Hebrew as well as a Jew should? And in either case, why didn’t Plantin commission them from a Jew who was truly knowledgeable, or at least have them proofread by one, especially if his Bible was meant for a Jewish audience? Surely he could have found such a person had he looked for him.

In solving one enigma for Mr. Glaser, it seems that I’ve discovered another. Who will solve this one?

Questions for Philologos may be sent to philologos@forward.com