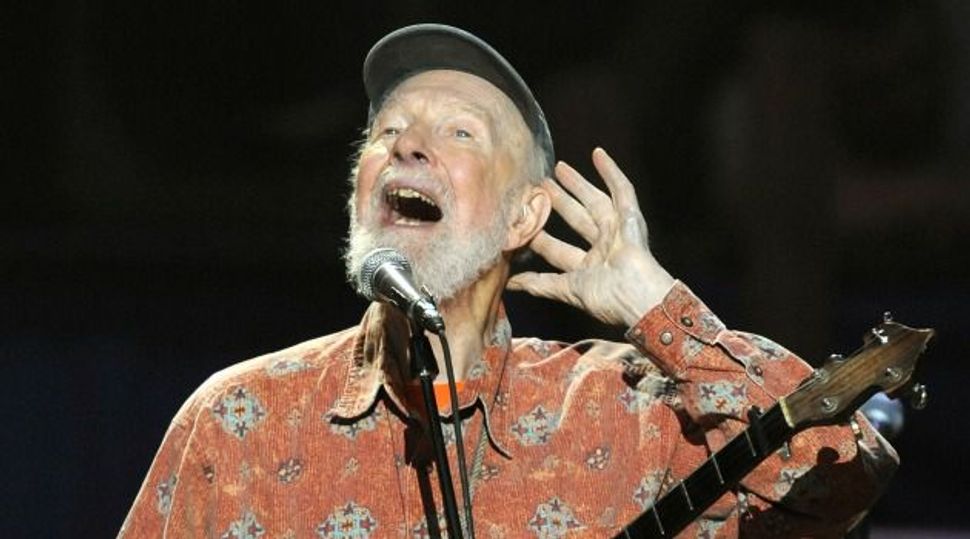 For Pete?s Sake: Iconic singer Pete Seeger died on January 27 at the age of 94. Image by Getty Images

Pete Seeger, who died yesterday at the age of 94, may have been a far greater believer in organizing people than he was in organized religion. “I feel most spiritual when I’m out in the woods,” he said when he was the subject of a PBS American Masters documentary. But growing up in the Jewish enclave of West Rogers Park in Chicago, I always viewed him as a patron saint (or rabbi, if you will). And for many of us who grew up in secular households — religiously checking his albums out of the Nortown Public Library, listening to him on the “Midnight Special” on WFMT, sitting in circles to sing his songs in kindergarten, then later teaching our kindergarten children to sing those — we often felt most spiritual when we were listening to Pete Seeger. In honor of his memory, we offer 7 classic Jewish Pete Seeger songs.

Pete Seeger performed this hymn to brotherhood and harmony with Theodore Bikel and Rashid Hussain.

Legend had it that Seeger was the one responsible for pulling the plug on Bob Dylan at Newport. But this recording of the song Dylan wrote for one of his sons suggests that, at some point, all was forgiven.

During Seeger’s Greenwich Village Llewyn Davis days, he recorded this song with his quartet The Weavers.

If Not Now, When?

Seeger mused on the words of Rabbi Hillel when he recorded this for the Isabella Freedman Retreat Center.

The words came from Ecclesiastes; the melody was provided by Pete Seeger.