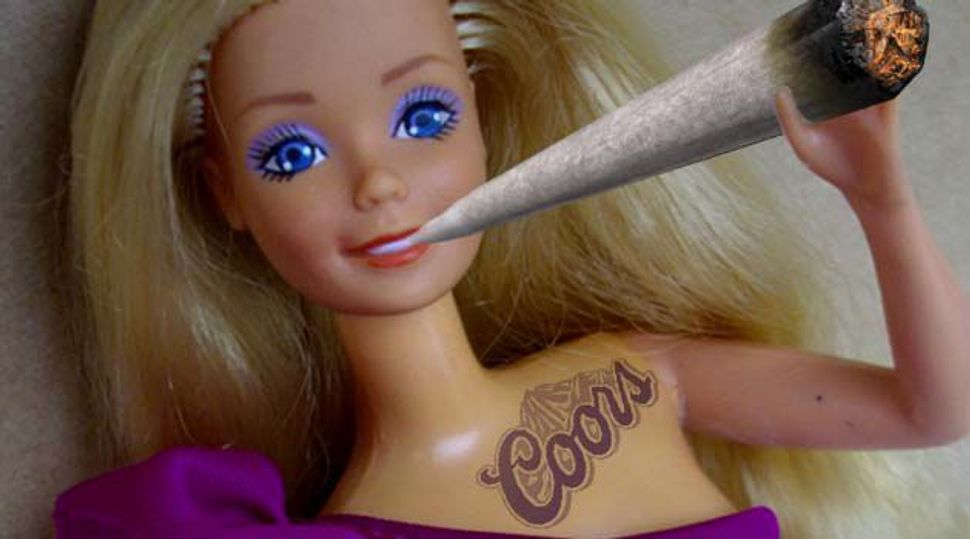 “The reality is, we just didn’t sell enough Barbie Dolls.” — Bryan G. Stockton, chief executive of Mattel, shortly before the Barbie brand joined forces with Sports Illustrated’s anniversary swimsuit issue. Mattel paid for the “opportunity” to appear in the issue according to The New York Times and has used #unapologetic to refer to the campaign in social media.

After another drop in sales compared with the fourth quarter last year, Mattel announced that the Barbie brand would join forces with the iconic MillerCoors brand.

On the 55th anniversary of Ruth Handler’s invention, the doll — based loosely on Handler’s daughter Barbara — is still in search of adventure. “This is an exciting opportunity for Barbie,” said a Mattel executive with knowledge of the campaign details, “as Barbie has yet to golf in a miniskirt or mock effeminate men while bartending. We’re confident this relationship will bring out the best in both brands.”

At the beach party-themed launch celebrating this dream merger, a spokesman for MillerCoors said, “Yeah. I guess we’re doing it.”

“But I have to be up early for a meeting tomorrow,” said the MillerCoors guy. “So I gotta be out of here by midnight.”

A further drop in first quarter sales has inspired Mattel to court and secure a partnership with Pfizer in a joint advertising campaign that will dress Barbie as a medical doctor who can prescribe both painkillers for arthritics and kidney-transplant drugs.

“We’re happy to see that Barbie hasn’t gone with a generic brand,” said a Pfizer executive at the 1970s-inspired disco party to celebrate the deal. “Because that would just degrade her.”

The historic, limited edition Barbie — sold exclusively at Dunkin’ Donuts —honoring the occasion is one shade paler then the classic, slightly-bronzed Barbie with whom the world has fallen in love, and comes with trendy oversized sunglasses designed by Roberto Cavalli. She is accessorized with a miniature Qua water bottle because she’s always thirsty. The new doll’s measurements are unchanged.

“This synergy couldn’t have happened at a better time for our brand,” said a spokeswoman for Mattel. “Barbie is really coming of age now. She’s mature. She’s ready to find that right brand who’ll stay with her for the long term.”

Buddafinga, the marijuana candy bar, is exploring a partnership with the Mattel Barbie brand, insiders from Mattel say.

“I saw her and was like, wow!” said a Buddafinga employee. “Then at first she was kind of a bitch. But we’re pretty accepting, even of bitches, so now we’re just hanging out sometimes.”

The tentative launch party will be held in a basement with wood panel walls. If Buddafinga comes through, a limited edition Barbie will have dreadlocks and sport a black T-shirt with a confusing graphic and a message promoting confirming recreational drug use. It will be sold exclusively at bodegas and deli markets.

“It’s weird,” said a spokesperson for Mattel. “Because at first Buddafinga was very enthusiastic about this product integration, but now it’s difficult to get them to return our messages, emails and texts. Actually, I’m not really in the mood to talk about this.”

Flava Flav and Barbie are joining forces, according to a press release.

“This is just what the Barbie brand needs,” a Mattel executive said at the joint press conference. “Flav provides Barbie with something she’s never had before — an oversize clock necklace and a viking hat.”

In turn, Barbie will be mobilized to assist in the marketing campaign for Flava Flav’s new business ventures, which are too racially offensive for most publications.

“We’re so excited about this because he’s such a famous public figure,” a Mattel spokeswoman gushed. “Most people don’t know this, but Barbie has been a big fan since his Public Enemy days. We knew right away this would work. When we started talks, it was like Flav and Barbie have known each other forever. Flav even asked about Barbie’s girlfriends, particularly Nikki, Carnaval and Tango. This clearly demonstrates that he’s interested and has genuine feelings for Barbie.”

Flava Flav has nicknamed the limited edition of Barbie “Sadd.” The doll will be sold exclusively by door-to-door salesmen.

Barbie has announced that after a 56-year relationship, she and Mattel are parting ways.

“Mattel can go eff themselves,” Barbie said in a statement issued through her publicist, Liz Rosenberg, adding that she’d like to qualify her statement with the hashtag, #unapologetic.

Devorah Blachor writes a mystery series under the pen name Jasmine Schwartz. Her novels include Farbissen and Fakakt.