Why You Shouldn’t Call Mel Bochner a Lox Jock 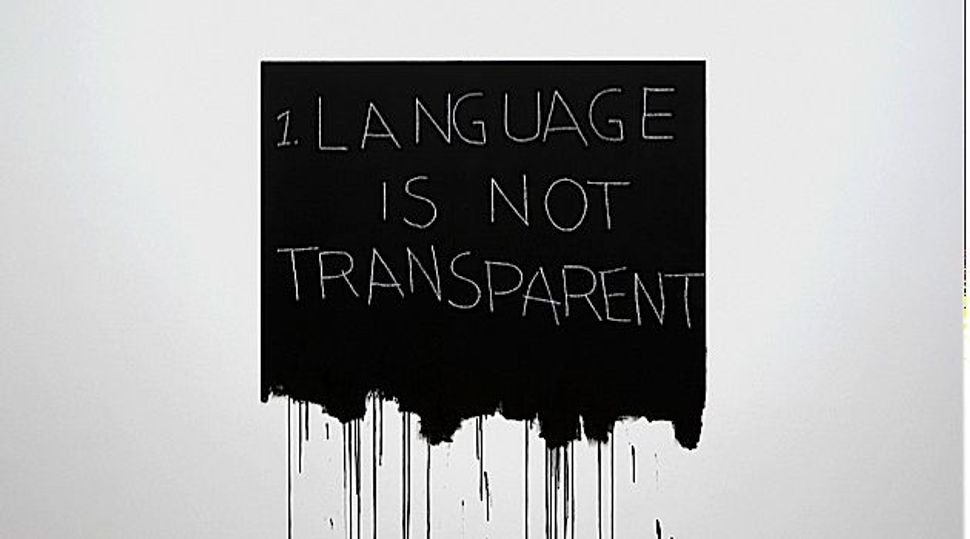 Wordsmith: Mel Bochner’s ‘Language Is Not Transparent’ from his ‘Strong Language’ retrospective, on view at the Jewish Museum in New York through October 12. Image by Courtesy of the Jewish Museum

From King Solomon to Ludwig Wittgenstein — with the notable exception of Moses — Jews have always been people of words. It seems appropriate, therefore, that the artist Mel Bochner’s new exhibition at the Jewish Museum, a retrospective of decades’ worth of his work and his first major museum show in New York City, is all about the power of language.

Bochner has long been fascinated with the visual representation of words and colors — essentially, with the association between what we say and what we mean, or what we intend and what is perceived. That relationship, and Bochner’s thesis, is best summed up by the maxim “Language is not transparent,” reflecting that words do not have meaning in and of themselves but contain only the power we ascribe to them, and that a word can never fully represent the object it describes.

For example, several of Bochner’s paintings feature a list of synonyms painted in bright, gaudy colors. On an eponymous painting, the word “nothing” kicks off a string of words, snaking “non-existence,” “obsolete,” “a rat’s ass,” “kaput,” and others in a rainbow of hues across a black 45-by-60-inch canvas. The words all mean the same thing, and yet none of them express precisely the same sentiment — except, perhaps, the irony of a tangible, visible word meaning nothing, which itself is a something. A similar painting meanders from “contempt” through dozens of words including “malice,” “ridicule,” “sharp tongue,” and “hate your guts,” in a linguistic journey that lumps together the eloquent and the colloquial.

Bochner says the paintings are inspired by Roget’s Thesaurus. A few years ago, he noticed that the book was a lot thicker than it used to be. “I was amazed at the kind of language that was now accepted as permissible for kids to see, for example. And I thought that marked a really huge shift in the politics of language,” he said.

The paintings are fun — the letters resemble children’s alphabet fridge magnets — and yet there’s a sinister sense of misdirection that comes from wrapping these profanities in bubblegum pink, sherbet yellow, and cotton candy blue.

“I actually think those are very dark paintings,” Bochner said, leaning back in his chair in an office on the top floor of the Jewish Museum. Dressed all in black, Bochner pushed back his thick gray hair, which coupled with his tall, firm stature knocks decades off his 74 years.

The exhibition’s title, “Mel Bochner: Strong Language,” points both to the obscene words Bochner uses in his paintings and, on a larger scale, to the mighty power that language holds. Both ideas resonate particularly within a Jewish context, where the spoken and written word have created and sustained Jewish communities through centuries but also subjected its followers to ongoing persecution at the hands of rabble-rousing political leaders and slur-slinging anti-Semites.

An experience with the latter inspired Bochner to paint “Jew.” While wandering around in cyberspace in 2008, Bochner stumbled across an anti-Semitic website that had a list of “some ways that you can insult Jews,” as he puts it. So he decided to paint them in his usual style, scrawling increasingly offensive words from “hebe” and “yiddle” to “kike,” hook-nose” and “Christ-killer” in yellow letters on a gray background — colors intentionally evocative of the Star of David Jews wore on their clothes in Nazi Germany.

The online list was “missing some good ones, like ‘hymie,’ but then they had other ones that are so ridiculous, like ‘lox jock.’ Where does that come from? In what context would you confront a person and call them a lox jock?” Bochner said. “But it’s the way it ends up, which is what the whole thing is about: the source of anti-Semitism, which is alive and well and living in language.”

Norman Kleeblatt, chief curator of the Jewish Museum, told the Forward that he and his colleagues “thought long and hard” about whether to show “Jew.” In the end, they designed the exhibition so that, even though “Jew” is displayed, the viewer turns away from the painting and is confronted, rather overpoweringly, with “The Joys of Yiddish,” a much bigger painting that uses brighter yellow and a bolder background to run its tongue over some of Yiddish’s most delectable terms: “kvetcher,” “shlimazel,” “meshugener.” A large-scale version of the painting is also currently installed on top of the Haus der Kunst, a triumphant crown atop Hitler’s propagandist museum in Munich.

Bochner thought up “The Joys of Yiddish” when he was commissioned to produce an outdoor installation for a construction barricade while Chicago’s Spertus Institute for Jewish Learning and Leadership was being rebuilt. He was one of three artists asked to contribute to the exhibit, called “The Language Barrier.”

The painting “was based on my own experience with my grandparents and my parents, that for Jews of a certain generation or period the language barrier was Yiddish. They spoke Yiddish, and everyone else spoke English,” Bochner said.

Although Bochner is loath to interpret his own work publicly, he admits that his Jewish upbringing probably influenced the development of his art. The son of European immigrants, Bochner was raised “in a very traditional family”; he attended Hebrew school and had a bar mitzvah.

“People [bring up] the Talmud, and the fact that Judaism seems to survive on language, so yes, I’m sure all of that had an effect on me,” Bochner said.

The Jewish Museum itself was instrumental in furthering Bochner’s artistic career. When he moved to New York 50 years ago, Bochner landed a job there as a security guard — during which a chance meeting would trigger a chain of events that would propel him to success — until he got fired for taking a nap behind a Louise Nevelson sculpture. That Bochner should return to the museum with his own retrospective of word-based works after a first gig there that mostly involved silence provides a satisfying sense of symmetry.

But Bochner puts that down to coincidence. “The building bears no resemblance to the museum from the ’60s, so there’s no spatial nostalgia,” he said. “I don’t even know where the bathroom is here anymore.”

Lauren Davidson is a frequent contributor to the Forward.

Mel Bochner: Strong Language” is on view at the Jewish Museum through October 12

Why You Shouldn’t Call Mel Bochner a Lox Jock