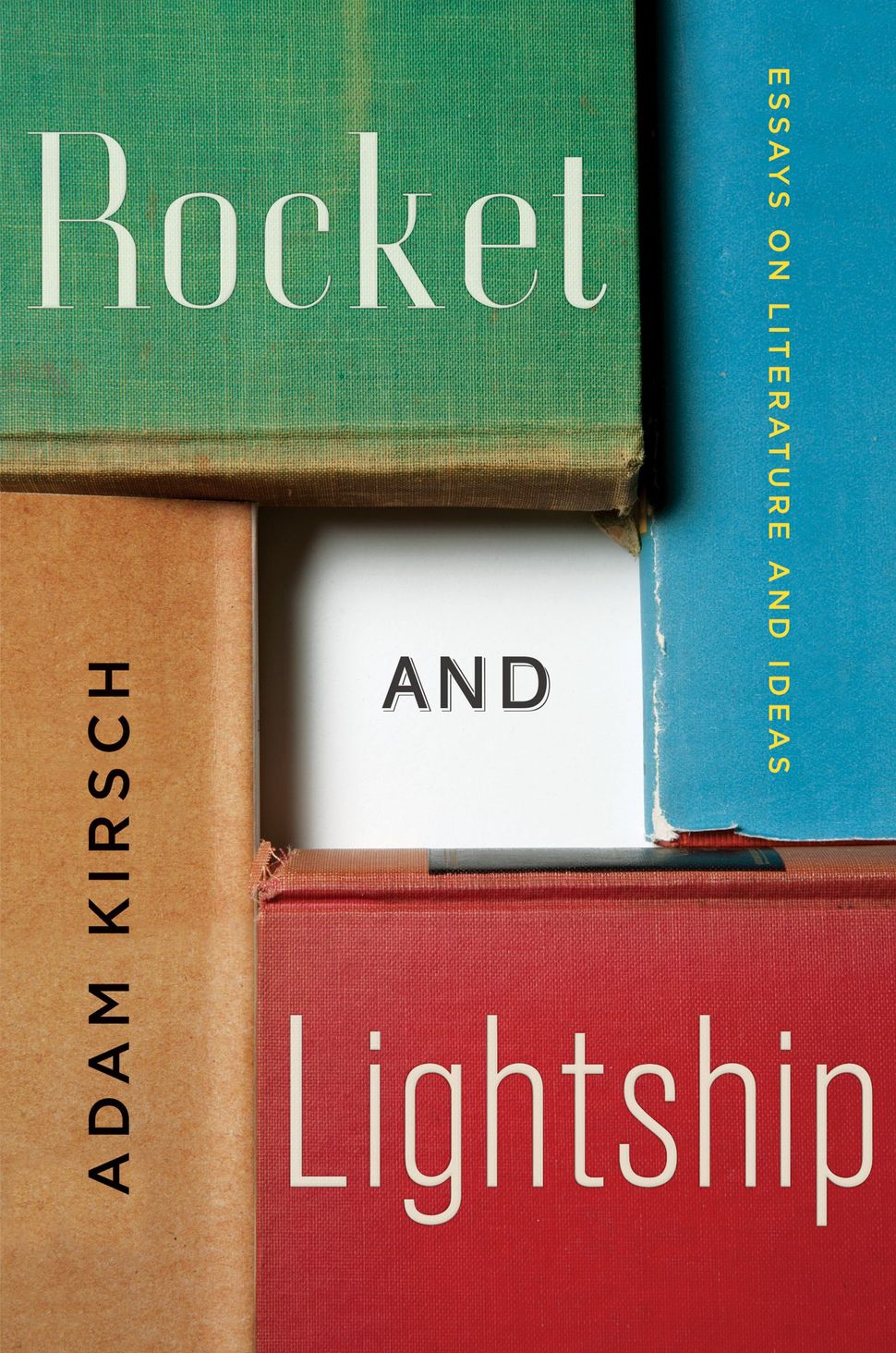 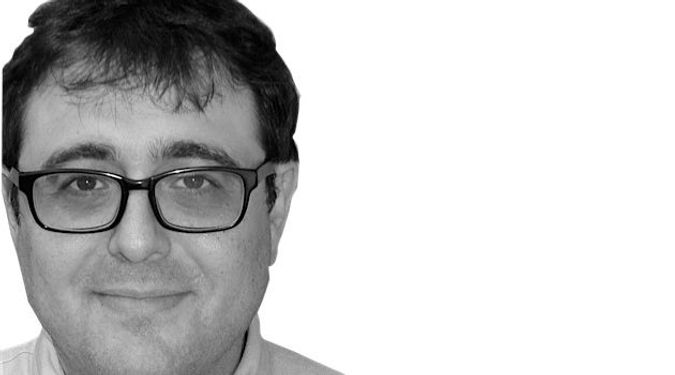 The DNA of Jewish America: Adam Kirsch sees himself as a Jewish intellectual rather than an intellectual Jew. Image by Remy Kirsch

The crisis facing American Jews today is the result of the comfort of their surroundings. The barriers to assimilation Jews faced in the past are now gone, if not reversed, rendering the border between liberal Jew and non-Jew a thing of the past.

And yet, one author, raised in liberal Judaism’s bosom, has been quietly redefining what it means to be a Jew in the 21st century. Adam Kirsch, poet, senior editor at the New Republic, and columnist for Tablet Magazine, has a new book out this week: “Rocket and Lightship: Essays on Literature and Ideas,” featuring 19 of Kirsch’s essays. They are works of criticism, and most take their starting point from a single author — Walter Benjamin, Hannah Arendt, David Foster Wallace, Slavoj Žižek — and proceed to explore the aesthetic, ethical, historical and political implications of the ideas these authors raise.

“Rocket and Lightship” is a work of staggering erudition, and subtle, nuanced thought. Many of the essays deal with their subjects’ struggles with Jewish identity, like the time Gershom Scholem accused Arendt of lacking “love of the Jewish people.” “You are quite right,” Arendt responded.

Kirsch thinks a lot about what makes a text Jewish, and what it means to be Jewish today. “One of the dilemmas of American Judaism is because it doesn’t believe in the religion, it believes in the Jewish people,” Kirsch said when we met at a wine bar on a recent afternoon (Kirsch drank beer). “Jews, like everyone, are born with a history and you have to understand how that history formed you or you’re going to be confused and at a loss and more vulnerable to other people.”

Kirsch was no doubt formed by his own personal history. The scion of a literary family, his father is writer Jonathan Kirsch, and his grandfather was Los Angeles Times book critic Robert Kirsch.

Kirsch was born and raised in Los Angeles, where his family belonged to a Conservative synagogue. He attended Harvard, where he wrote his first real poem and met his wife of 20 years, Remy Holzer Kirsch, with whom he now lives on the Upper East Side of Manhattan with their 7-year-old son.

Kirsch leads the life of a gentleman scholar: He spends the majority of each workday alone, reading and writing. And he has the intelligent, retiring mien of one, too, always deferring to what he can prove, never making a statement beyond those bounds. He has the reticence of a man who has devoted his life to the pursuit of deeper truths, and who is not about to betray that cause by overstating his case. In this sense, he feels less like the stereotype of the Jewish intellectuals about whom he writes, and more like an intellectual who happens to be a Jew. Part of that is no doubt disposition, but part of it may be due to his intellectual roots, which informed his voice and his evolution as a thinker, far more so than his Jewishness, despite the significant role it played in his roots.

“It’s true that the kind of literary criticism that I set out to write and want to write is different from the kind of New York intellectual essays which interest me and which I’ve read a lot and thought a lot about, but it’s not the kind of writing that I do myself,” he said. “Because I’m a poet, maybe, and writing in English, and… English literature is the literature I know best and it’s my literature.”

“Rocket and Lightship” presents a literary approach to big ideas. The title comes from a quotation from a poem about a shipwreck by poet Gerard Manley Hopkins. “I liked the suggestion of providing illumination in a catastrophe,” Kirsch explained. The book is a kind of eye in the storm of 20th-century Jewish writing. The calm and extreme subtlety of Kirsch’s words contrast sharply with those of the Jewish writers he discusses and seems attracted to, especially the diarists. Rather than the bombast of Alfred Kazin, Susan Sontag, or Cynthia Ozick, Kirsch’s claims are modest, his language nuanced and disciplined. But the incongruity lies elsewhere as well: Unlike the Jews about whom he writes, Kirsch does not seem to struggle with Jewishness. This allows him to interrogate the concept of Jewishness with the clarity afforded him by the distance, perspective and nuance of a critic minted in a completely other tradition, returning to take stock of his own.

When we met, Kirsch politely disagreed with my analysis that positioned him as an intellectual Jew rather than a Jewish intellectual. He sees his book as squarely within the Jewish tradition, and, at a more practical level, as addressing a Jewish audience. “There’s a lot of Jewish DNA in the American, especially New York intellectual community and tradition,” he said.

But beyond the practical, Kirsch sees himself as a product of his familial and national history, shaped by the politics and textual traditions of the Jews — and inalienably so. “I think there are lots of things in my background, in my mind, in my psychology, in the deepest parts of myself, that are owed to being Jewish,” he said. 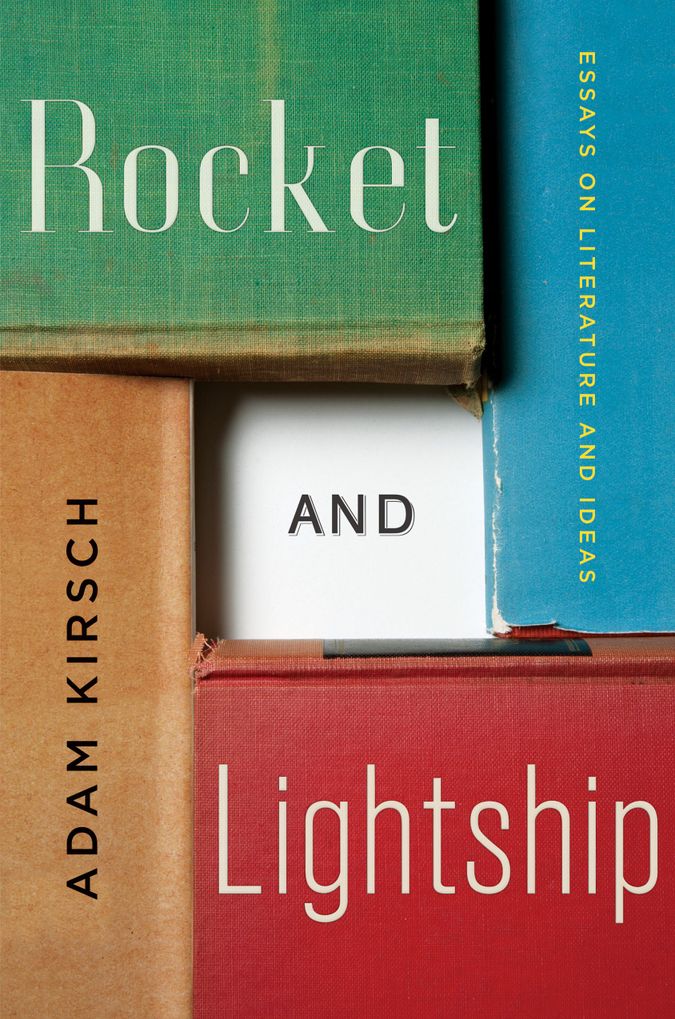 Kirsch’s desire to understand himself led to a revisitation of Jewish texts. His “Daf Yomi” column in Tablet examines the Talmud page by page. “It’s not something I was raised with,” he said. “I want to know these things, and the way I was raised in a Conservative synagogue, I ended up knowing a lot about certain elements of Judaism, but you don’t really learn the intellectual heritage, and I wanted to get into some sort of relationship with that tradition.”

Kirsch is an atheist, and finds himself unable to believe that Jewish law is somehow supernatural. And yet, he wants to understand it. “It’s one of the keys to who I am and who my ancestors are and my tradition and all those things,” he said. “For a Jewish writer in a non-Jewish tradition, which is what American Jews are, you have to have some sort of positive relationship to being Jewish, or else it will be defined for you in a negative way.”

If one is an atheist and unable to believe in the divine origin of religious law, what sort of a relationship can one form with Judaism? “It’s not a new question,” Kirsch said. “And because there’s such a long history of Jewish modernity, you can take shelter in that tradition and say, ‘Being a modern Jew doesn’t necessarily mean that I believe in all the precepts of Judaism, but it can mean something else.’ And that ‘what else’ is what interests me.”

“Rocket and Lightship” delves into that “what else” of Jewish identity. In language as elegant as his thoughts, Kirsch discusses the undercurrent of fascism in Žižek, and the lack of empathy in Arendt. Themes recur throughout the text: Does art have ethical responsibilities? If human nature is both compassionate and violent, both progressive and destructive, how can evolutionary theories possibly guide us? Is Jewish universalism possible?

The language sparkles with Kirsch’s trademark wit and insight. Susan Sontag is “a hedonist according to the categorical imperative.” Of the paradox that is our birthright: “It is human nature to be violent and competitive, and it is human nature to be compassionate and cooperative. Unlike the animals, we are aware that such alternatives exist, and have no choice but to choose between them, not just once and for all, but every time we act.” And, deliciously, on Žižek’s fundamental dishonesty, Kirsch writes: “That liberalism is evil and communism is good is not his conclusion, it is his premise; and the contortions of his thought, especially in his most political books, result from the need to reconcile that premise with a reality that seems abundantly to indicate the opposite.”

His instincts tend to be anti-utopian because of the danger posed by utopian thinking. “I have a skeptical relationship with the left, although I feel closer to them, than with the right; that’s who I’m in dialogue with,” he said. “One thing that I think unites the essays in the book is thinking about liberalism and what it means.”

Some people bring out our best selves. This book does that, raising the reader to its level, encouraging us to emulate its author and question our reactions in the same manner that Kirsch engaged his sources. But the calm Kirsch has found in his Jewish identity allows for this searing questioning, which is starkly opposed to the explosive contradictions his subjects’ Jewishness posed for them. And this calm provides the arena for a much larger project — an interrogation of the thoughts and feelings Kirsch experiences as a reader.

“I try to stay within the realm of a literary response,” he said, when I pressed him for any larger politics. “I’m trying to unpack my reaction to a text.”

But Kirsch’s humility belies the importance of “Rocket and Lightship,” which lies in Kirsch’s double commitment — on the one hand to the consequence of his own instincts, but equally so to examining, analyzing and evolving alongside those instincts. “Rocket and Lightship” is an instruction manual in how to think, not just about ideas themselves, but also about how one feels about those ideas. It is a handbook in how to lead an examined life, and reveals Kirsch to be one of the most important writers of the 21st century, Jewish or otherwise.

Batya Ungar-Sargon is a writer and critic based in New York.