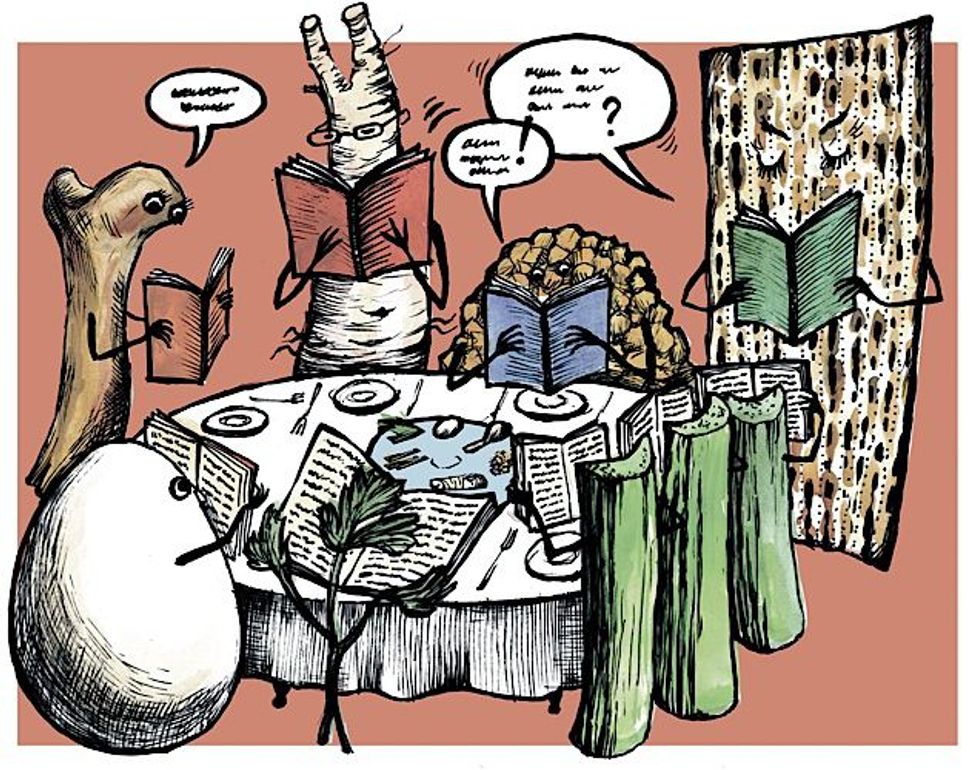 That’s what my partner asked, as I rifled through this year’s crop of new Haggadot. Each year, it seemed, brought a new edition written or edited by a celebrity: Cokie Roberts, Nathan Englander, Edgar Bronfman, Elie Wiesel.

But not this year. And browsing Amazon’s best-sellers, I got a sense of why: The best-selling Haggadot are not the ones with the bling, but the ones that actually get used. Number one? “30 Minute Seder,” which “blends brevity with tradition.” And so it does: clear, crisp, 95% English, with none of the 250 plagues at the Red Sea. (Cokie, meanwhile, is back at No. 77 — although in fairness, her Haggadah was published in 2011.)

Surely the best-seller of all time, “The Maxwell House Haggadah,” isn’t even on Amazon’s list, because it’s given away basically for free, and thus isn’t for sale by the retail behemoth.

But let’s face it: Unless you’ve got some tricks up your sleeve, Maxwell House just isn’t going to cut it for kids. There’s nothing there: no games, no guides, hardly any pictures. And given that “you shall tell your children” the Passover story is the primary commandment of the Seder, using it is practically a dereliction of duty.

This year’s crop of Haggadot does much, much better. Probably the most worthy new addition to the pile is “The Gateways Haggadah,” published by Behrman House. Gateways is a Boston-based independent Jewish organization that works across denominational lines to make Jewish education accessible to children with learning disabilities.

“The Gateways Haggadah” is a perfect execution of that mission. As we all know, the Seder taxes everyone’s attention — so imagine what it’s like for a child with ADHD, or on the autism spectrum. Bewildering symbols, new foods, incomprehensible Hebrew passages, drunk uncles. The Haggadah does its best to make the story and rituals more accessible: It includes Mayer-Johnson visual symbols, widely used in special education classes, with new symbols developed for Passover-specific words like “dayenu” and “maror.”

Most interestingly, “The Gateways Haggadah” re-imagines the four children (just think about how the “simple” or “wicked” child might sound to someone with a learning disability). The “wise” child is here so excited that his parents have to calm him down (which seems pretty faithful to the original text), the “wicked” child is upset because her routine is disrupted, the “simple” child is just confused, and the fourth child who does not know how to ask is completely overwhelmed.

I know the gateway of the Haggadah’s title is meant to point toward a gateway into Jewish engagement for kids with special needs, but this Haggadah was, for me, a gateway into better understanding of special needs kids, and new perspectives on an old story.

If your kids don’t necessarily have special needs, but are still more or less impossible to corral around the Seder table, you might try Sharon Forman’s “The Baseball Haggadah: A Festival of Freedom and Springtime in 15 Innings.” The only new Haggadah currently on Amazon’s top 10, the “Baseball Haggadah” delivers what it promises: a kitschy, fun reframing of the Seder (participants are “batters,” Passover symbols include hats and chewing gum). I admit that I was slightly disappointed in the “Baseball Haggadah,” but only because I was hoping for an obsessive-compulsive tome filled with Jewish baseball lore. Maybe next year, Rabbi Forman?

On the Orthodox end of the spectrum, Rabbi Nosson Muller’s “Generation to Generation Haggadah” wants us to focus on making Passover interesting to children, and proposes various glatt-kosher ways to do so. There’s also a frum Haggadah for kids, “Let’s Go Free with Miri & Tzvi,” where all the commentaries are rabbi-approved and all the clothes are modest.

For overgrown but still immature kids, there’s a Haggadah put out by JewishBoston.com, whose slightly edgy design and text encourages its putative audience, “Go ahead, be Jewish the way you want.” Admittedly, its title, “The Wandering Is Over Haggadah,” may seem like an odd choice to anyone who’s tried to navigate the North End. (Or Brookline. Or Chinatown. Or Storrow Drive. You get the point.) Available for free online, it’s clear and easy to use, though it has the soulless aroma of a well-funded “outreach and engagement” program for 20-somethings. Oh look, you can tweet your #FifthQuestion!

This year also brings a cache of niche Haggadot. The micro-movement of Open Orthodoxy now has one to call its own (“The Lieberman Open Orthodox Haggadah”). To their right is prolific storyteller Yechiel Spero, who wants us to have “ironclad emunah” (faith), and make the spring holiday of Nisan “a month of mesirus nefesh” (self-sacrifice), as he states in his Haggadah “Touched By Our Story.” Oy. At the other end of the ideological spectrum, there’s this year’s sumptuous “Asufa Haggadah,” with an assortment of Israeli artists illustrating the Haggadah in styles ranging from art-pop to agit-prop — an art-book bargain at only $25. And there’s the trilingual “Canadian Haggadah Canadienne,” replete with pictures of happy Jewish Canadians.

And, if you really don’t mind boring your kids to tears, you might try the catchily titled “The Monk’s Haggadah: A Fifteenth-Century Illuminated Codex from the Monastery of Tegernsee,” with a prologue by Friar Erhard von Pappenheim. Your children will enjoy “arguably the earliest quasi-ethnographic account of Jewish practice in early modern Europe,” especially in its new critical edition of the Latin text. (Just kidding: “The Monk’s Haggadah” is meant for serious scholars, and includes a beautiful facsimile edition of a 1489 illustrated text.)

So, no Cokie Roberts this year, unless you count Friar Erhard von Pappenheim. Instead: a renewed focus on the Passover commandment to tell the story to the next generation — and a Seder-plateful of ways in which to do so. Could be worse.