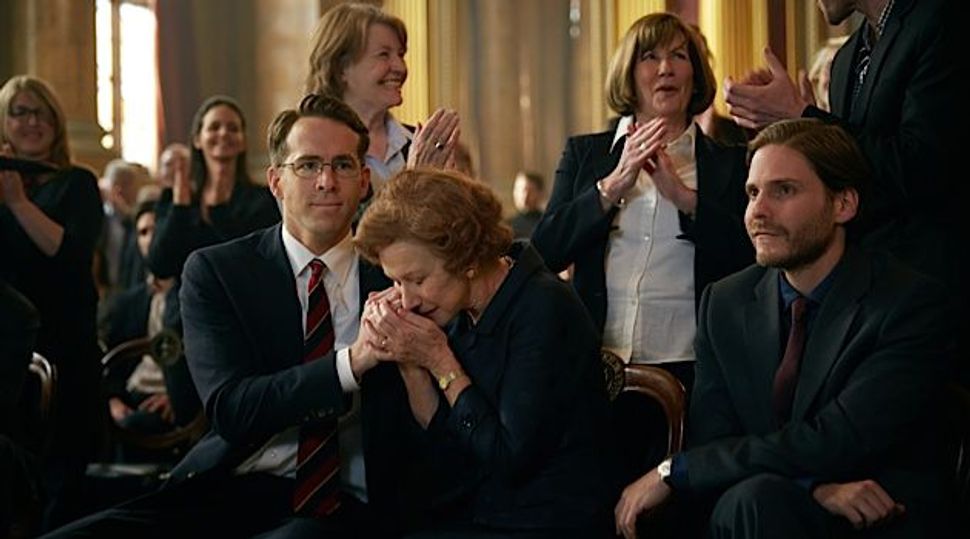 If Richard Linklater’s “Before Sunrise” motivated young travelers to chat up random passengers on the train, make an impromptu stop in Vienna, spend the night wandering its streets, and finish off by having sex in the Stadtpark, Simon Curtis’s “Woman in Gold” might serve as inspiration for a different sort of tourist experience. Young American Jews, it screams, come and visit Vienna. See the imperial buildings, the marble floors, and Cafe Sacher. In these beautiful settings, you will connect to your family’s past. Conveniently located near the Holocaust memorial, you will find a bathroom to cry in. Don’t do that in public, though — those Austrians are still out to get you. If you are lucky, though, you might befriend one of the few righteous natives. They will serve you strong drinks and tell you that their father was a Nazi. Come home with some souvenirs (Klimt fridge magnets are highly recommended) and the intention to listen to more classical music.

That’s because “Woman in Gold” turns an important, complicated story about the Holocaust and art restitution into a James Bond movie, utilizing arguably every single cliché that ever existed when it comes to telling stories on the big screen about Vienna, intergenerational friendship, National Socialism and journalism.

It is based on the true story of a recent successful art restitution case involving five paintings by Austrian artist Gustav Klimt, including the “Portrait of Adele Bloch-Bauer I,” which became known as “Woman in Gold.” The portrait, one of Klimt’s only three gold paintings (the most famous one being “The Kiss”), was seized from Ferdinand Bloch-Bauer, a Jewish business tycoon and Adele Bloch-Bauer’s husband, after the Anschluss in 1938. (Adele Bloch-Bauer had died in 1925 of meningitis.)

As the film explains, in 1998, Adele Bloch-Bauer’s niece Maria Altmann (Helen Mirren), who had fled Vienna to Los Angeles, discovers letters chronicling unsuccessful attempts to reclaim the paintings after the war. Together with American lawyer Randol Schoenberg (Ryan Reynolds), she sets out to retrieve her family’s belongings. Via Austrian journalist Hubertus Czernin (Daniel Bruhl) they discover that her uncle hadn’t donated the paintings to the Belvedere Museum, as the museum claimed.

Her quest for justice takes her back to Vienna, which looks cornier than on the cheapest postcards. It seems to consist solely of palaces that are not exactly known for having the most inviting atmospheres. In those unfriendly buildings, they meet a bunch of unfriendly Austrians (most of whom are actually played by German actors), who fight vigorously to keep the Klimt paintings — including the “Woman in Gold,” which they refer to as “Austria’s Mona Lisa” — in the country.

The only refreshing exception is Czernin, and the filmmakers make it easy to spot that he’s an honorable journalist by equipping him with greasy hair, an ill-fitting jacket and a proclivity for strong drinks. Nevertheless, both Altmann and Schoenberg in the movie as well as the filmmakers seem to have a hard time appreciating his contribution, even though there are some really awkward bromance moments between Schoenberg and Czernin. After all, it was Czernin’s journalistic work that led to a new art restitution law in Austria in 1998, which allowed the government to set up advisory committees to decide about returning artwork.

Along the way, there is some unconvincing bantering between the elderly, sweet-but-snarky Altmann, who loves adjusting her hair and, as played by Mirren, has an astoundingly authentic Austrian accent and a rather schoolboy-esque Schoenberg, whose hairstyle and facial expression undergo very little adjustment throughout the 110-minute movie. They don’t particularly like each other in the beginning, but end up being really good friends. Who would have expected that?

Because this is a Holocaust movie, everyone also gets a turn to cry. Schoenberg does it in a bathroom after he visits the Holocaust memorial. Altmann does it after one of the many flashbacks to her youth when she had to leave her parents behind for her harrowing escape from Vienna.

These flashbacks tend to look like reenactments of familiar photos from the Anschluss — lots of bright red swastika armbands and cheering Austrians painting “Jud” (“Jew”) on walls and storefronts. Just to make sure that viewers understand that this happened more than seven decades ago, the clips have a sepia tint.

Altmann’s escape is the part of the movie that keeps you on the edge of the seat, aimed to convey the message that, boy, those Nazis must have been really bad if it requires a pharmacy, a back door, maze-like back lanes, a cheering crowd and various transportation vehicles (bike, car, airplane and ship) to escape. These are true events, but the score, by Martin Phipps and Hans Zimmer, who composed the soundtrack for such blockbusters as “Pirates of the Caribbean,” makes it feel like the escape took place in an alternate reality where zombie pirates and crazy mermaids pose the real threat.

Thanks to the storyline, the visuals and the acting, “Woman in Gold” is bound to leave you teary-eyed, craving Sachertorte, considering the purchase of a Klimt print for your bedroom, and searching for unemployed Ryan Reynolds-lookalikes if you ever find yourself in need of a lawyer. It might even encourage you to visit Vienna, but — let me tell you as someone who grew up there — you’ll be severely disappointed at the absence of marble floors in average people’s houses. And when searching for righteous Austrian allies, don’t rely on Daniel Bruhl — he’s German.