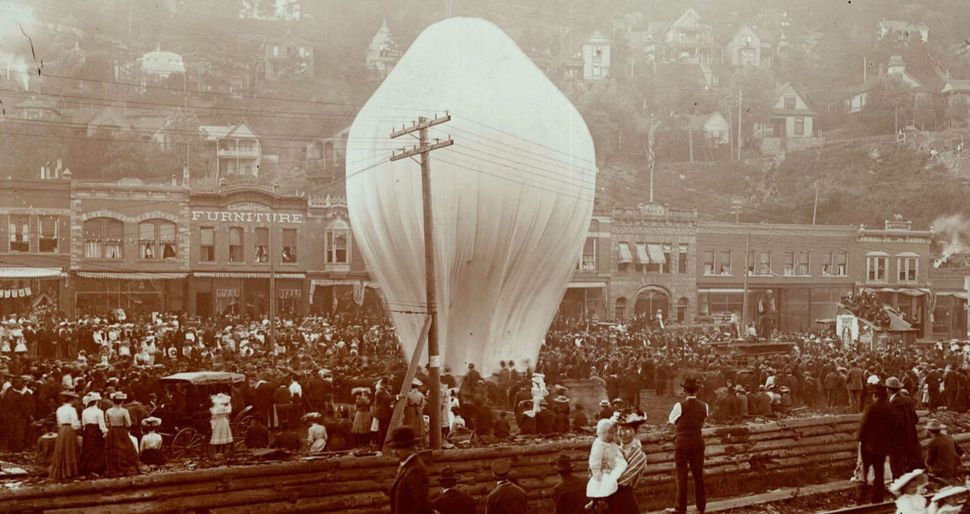 Image by Courtesy of Marc Aldrich

There were multitudes of Goldbergs in the Bronx where I grew up, but here in Deadwood, South Dakota? When I got here, few in my certifiably tiny Black Hills Jewish community knew much about its history. There was little to be found in books about Jews of the Old West. But soon, family names, microfilmed historical newspapers, cemetery records, and old photos began to weave a fascinating and detailed story. Twenty or more years of relentless research ensued, resulting in the publication of my book “Jewish Pioneers of the Black Hills Gold Rush.”

Blanche Colman, one of the first women lawyers in South Dakota, once said that there were hundreds of Jews in this region. This turns out to be true. In Deadwood, there are Jewish stories inscribed on gravestones, hidden in the deepest mines and on the highest elevations of hills, in newspaper clippings and advertisements, and on the streets and buildings and shops. There are beautiful Hebrew inscriptions in the Jewish cemeteries — during the first 50 years of settlement, there were two. Calamity Jane died leaving a balance on Goldberg’s Grocery’s account books. Fully two-thirds of all business establishments on Deadwood’s Main Street were either owned, operated or occupied by Jewish merchants.

A virtual tour of Jewish Deadwood and environs must leave something to the imagination. Some door fronts have changed, and so have the addresses. Wooden buildings fell victim to fire; old businesses were replaced by gambling casinos. Still, on Main Street, some landmarks and sites remain to tell the story of South Dakota’s Jewish past.

1) One of the highlights of the region’s impressive Jewish history is the imposing Franklin Hotel (now known as the Silverado Franklin), located on 700 Main St. Harris Finkelstein, the hotel’s founder, was a German immigrant who started as a peddler in upstate New York. Finkelstein’s interests in Deadwood’s resoundingly successful liquor business eventually led him to bring his wife and their 7-year-old son to Dakota Territory. Finkelstein made an immense fortune in cattle, banking, and a gold mine. His only son, Nathan Finkelstein, would go on to become the mayor of Deadwood.

2) The first Jewish wedding in Deadwood happened on April 10, 1879, in the D. Holzman Building on 647 Main St. “It was one of the most prominent social events since the settlement of this country,” according to the Black Hills Daily Times. “Mr. David Holzman, one of our bonanza clothing dealers, and Mrs. Rebecca Reubens, the beautiful and accomplished daughter of Mr. Louis Reubens, were joined in the holy bonds of wedlock. The interesting ceremony took place at the residence of the bride’s parents in Ingleside, in the presence of at least 60 ladies and gentleman of our best Hebrew society and of all other nationalities.”

3) A little known fact about the proprietor of Felix Poznansky’s Montana Store, located at 600 Main St., was that its owner, apart from owning a dry goods and clothing store, was also a well-educated mohel. Poznansky traveled throughout western South Dakota, performing the mitzvah of ritual circumcision for infant Jewish boys.

4) On 672 Main St., we find the Gold Dust Casino. Up until the gambling surge arrived in Deadwood, this was the grocery store of Jacob Goldberg. Jake bought the slap-up shack called the Big Horn Grocery in 1876 and grew it into one of Deadwood’s most successful businesses. He came to America at the age of 18 from Germany with his family who settled in New York City. Seeking new opportunities on the Western frontier during the Montana gold boom, Goldberg made his way to the mining city of Helena, where he worked in the clothing business. Fire stole his possessions in a blaze that incinerated much of the city. During the Gold Rush, Jake Goldberg joined a large company of 140 hopeful Montana frontiersmen, along with fellow Jews, Sol Star and Sam Schwarzwald, arriving in Deadwood in 1876. Goldberg was one of the founders of the city library and a leading figure in Deadwood’s civil and Jewish society. He and his wife raised their family in Deadwood. Goldberg’s sons, Joe and Sam Goldberg, kept the grocery store going for several more decades after Jake Goldberg retired and moved to California.

5) Six hundred fifty-two Main St. is the site of several Jewish commercial landmarks, including businesses owned by Herman Rosenthal, a clothing merchant; Joe Levinson, who dealt in jewelry; and Nathan Colman. The latter’s businesses included a confectionery and tobacco shop, ice and milk shops, a bakery, and a mining company. Colman was one of the first of the Jewish pioneers in Deadwood. He arrived in the dead of winter of 1876. His wife, Amalia Colman, arrived by stagecoach the following spring with infant Anne, the first of seven children, only three of whom survived childhood. Nathan Colman, a religious Jew, well-read in Hebrew prayer and ritual, assumed the role of lay rabbi, a position he held for over 30 years. The Colmans’ daughter Blanche Colman — one of the first women attorneys in South Dakota — helped to document the Jewish history of Deadwood.

6) Continuing down the street, we find Schwarzvald’s Furniture, located at 620-622 Main St. This was the “high-rent” district where major hotels and shops once stood. Schwarzwald’s was one of the longest-operating commercial enterprises in Deadwood’s history, engaging in commerce amid the bawdy houses, saloons and dance halls.

7) As we cross the brick street, we visit Jewish landmarks on the opposite side of Main Street. Solomon Star, whom some may recognize from the HBO series, “Deadwood,” was Deadwood’s first Jewish mayor. Born in Bavaria, his parents sent him to Ohio to live with an uncle at the age of 10. Sol Star would move to Virginia City, Montana, where he operated a store until 1872. His interest in politics garnered him an appointment by President Ulysses S. Grant as register of land at the Helena General Land Office. He also worked a term as territorial auditor and was personal secretary to the territorial governor. As mayor, Star helped organize the region’s fire department and was an early postmaster.

8) Although they never had a formal synagogue building, Jews usually gathered for worship at the Masonic Temple on 715 Main St. Their Torah, now known as the Deadwood Torah, came from Königsberg, Germany, in 1886, with FrIeda Lowenberg, the young bride of Benjamin Blumenthal, a dealer in hides. The venerable Deadwood Torah is preserved at the Synagogue of the Hills in Rapid City.

9) Venturing a bit further afield, we find ourselves at the historic Mount Moriah Cemetery. No, it is not on Main Street, but no tour of Deadwood or of Black Hills Jewish history would be complete without a visit to the cemetery’s Mt. Zion. The tombstones speak volumes about where our Jewish people came from, their births and deaths, their loves and their losses. A little knowledge of archaic Hebrew helps to translate, but most are in English. Tread gently, and do leave a stone.

Ann Stanton is the author of “Jewish Pioneers of the Black Hills Gold Rush.”