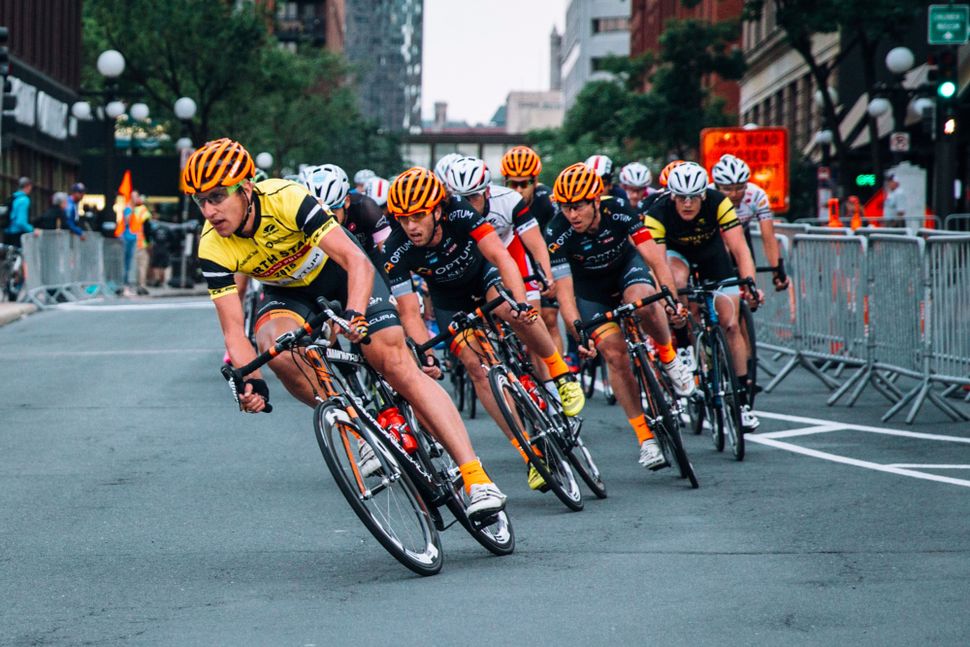 Charles Aaron grew up in St. Louis Park, Minnesota, the same Minneapolis suburb that spawned Thomas Friedman, Al Franken and the Coen brothers, only Aaron had different ambitions: He wanted to run a professional bike team.

His father gave him a Schwinn 10-speed for his bar mitzvah, which Aaron began racing, at first holding his own against older kids, then later beating them. He idolized Greg LeMond, the American champion he read about in cycling magazines, and by the time he was in his early 20s, Aaron was living in Baltimore and racing in the upper-amateur ranks for a team sponsored by Serotta Bicycles.

But he knew he would never make it to the elite pro ranks like LeMond, and, having just gotten married in 1995, he knew he could never raise a family on the nominal stipend the team paid him. So when the manager quit and the owner asked Aaron if he wanted to run the team, he jumped at the chance. “I was making $17,000 and super excited,” Aaron said. “The team folded the next year.”

He’s seated in a corner office on the 10th floor of the Ceresota Building in downtown Minneapolis, which overlooks St. Anthony Falls on the Mississippi River. He’s 45 years old, and his curly hair has gone gray; he sports a couple days’ growth of scruff, though his legs are clean-shaven, even if he has gained a few pounds since his racing days. The building is headquarters for Aaron’s company, Circuit Global Sports Management, which runs the top domestic professional cycling team in North America.

The Serotta team’s collapse, which was not of his doing, left Aaron without a job, until Ross Bicycles hired him to run its mountain bike team. “I learned everything not to do that first year,” Aaron said.

He had quick success in his two years with the team, showing a natural aptitude for raising money and attracting sponsors, including Trek and Cadillac. He moved on to match action sports with sponsors and had more success. Within five years he had sold more than $10 million in sponsorship.

But then he hit hard times. In 2000 his marriage ended. He was out of work. Broke and alone, far from home, without any other prospects, the only work he could find was parking cars nights at the Baltimore Hyatt, on the fringe of Mondawmin neighborhood, site of the Freddie Gray riots. He didn’t fit in with the other valets, some who brought guns to work, some who had kids they didn’t see, some who didn’t even have driver’s licenses. “I was miserable,” he said. “I was working with people who didn’t care. I actually give a damn and want to be the best at whatever I do.”

That sparked the motivation to get his life back where he wanted it: running a professional bike team. During lulls in his valet shifts, Aaron researched possibilities on his laptop and sketched a business plan. He made a presentation one day to an advertising agency and was pleased that it went well. He then walked four blocks to the Hyatt and swapped his suit for his valet outfit, only to see the ad guys pull up later that evening for dinner at the hotel. “I didn’t get the deal,” he said. “That was a real hard swallow for me.”

Aaron moved back to Minneapolis, where a friend lent him office space, and he started hustling. He worked every connection he could summon in his hometown, including executives at top Twin Cities’ corporations such as Target and 3M, but he could not secure interest in supporting his plan.

When Aaron learned that the CEO of Caribou Coffee, Michael Coles, was an avid cyclist, he sweet-talked his assistant, even sent her flowers, to score a meeting with Coles. Aaron arrived in his rusted-out ’83 Land Cruiser, which he parked in the back because he was embarrassed to be seen getting out of it. Still, when they sat down for coffee and Aaron began laying out his vision, he felt optimistic — until 10 minutes in, when Coles cut him off. “How’d you get this meeting?”

Aaron begged banks to give him a loan. They wouldn’t. He racked up $100,000 in debt, living credit card to credit card. “It was brutal,” he said. “I should’ve quit, but I didn’t know anything different. This is what I always wanted to do.”

Three days before Aaron left Baltimore, he had met with John Kelly, who runs Kelly Benefit Strategies, a company that manages benefit plans for businesses. The two stayed in touch for a year after Aaron moved back to Minneapolis.

One day in 2005, Kelly called to tell Aaron he had met the CEO of a nutrition company that wanted to sponsor a bike team. Aaron flew to Baltimore, and they locked up a deal with Medifast. “That’s when we launched the team.” Aaron said, pointing to a framed collage on his wall that showed photos of riders in kelly green KBS/Medifast jerseys. “It took 18 months to get off the ground from when I first moved back to Minneapolis.” 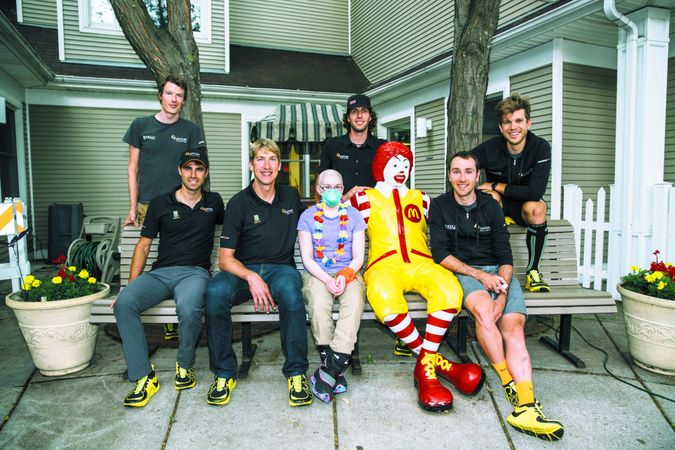 They’re Loving It, Apparently: Members of the Optum crew pose with new friends. Image by Courtesy of Sam Wiebe

Steadily Aaron built up the team. He garnered the support of Optum, the wellness business unit of UnitedHealth Group, as the lead sponsor in 2012. and so the jersey was changed to Optum’s company colors of black and orange. He added a women’s team that year. He has also added a number of high profile sponsors.

As head of Circuit Global Sports Management, Aaron now oversees the men’s and women’s teams, a $4 million budget and 30 employees that include a photographer, a graphic designer, mechanics and other support staff. The female team will race the women’s Tour de France this summer, and the male team is the top-ranked domestic team in North America.

Moreover, in the performance-enhancing-drug-tainted world of professional cycling, Aaron has managed to achieve success with

‘Now is the time I get nervous. I don’t like race days.’

integrity. From the beginning, he insisted that his team race clean, and he brought in Jonas Carney, a former national cycling champion and an outspoken critic of doping, to set up a monitoring program as the team’s directeur sportif. 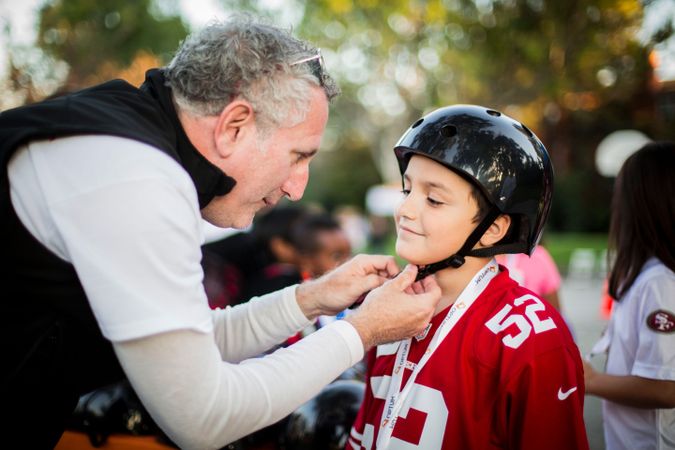 Credit his parents; they raised him in an Orthodox household. Even though Aaron jokes that hegot away, he has Sabbath dinner with them every week, and admits that he still carries their values. “My father didn’t want me to have a nose ring, a tattoo— or to cheat in any way,” he said. “I don’t want to disappoint him.”

It’s Friday night, June 19, at the Uptown Criterium in Minneapolis, Stage Four of the North Star Grand Prix. Aaron has told his riders it sure would be good to have a win. They have won the overall race the past four years but never this stage. It gets the most media coverage of any of the six stages, and Aaron knows a win would maximize exposure for his sponsors. But he can’t watch.

When the starting gun fires to send off the riders on 40 laps around the half-mile circuit, Aaron says, “Now is the time I get nervous. I don’t like race days.”

In his black shirt with the orange Optum logo and black shorts, he walks with his fiancée, Karen Bebchuk, among the crowd rather than watching the riders whir by every three minutes at 30-plus miles per hour. People approach him — friends, cyclists, fans. Older acquaintances call out “Hey, Chuckie.” He chats with all of them. When he spots a stranger in an Optum cap, he says, “That’s cool.”

Aaron spends several laps with his back to the course, talking with an executive from UnitedHealth Group. Five riders have sneaked off the front, gradually building a lead of more than 20 seconds with 15 laps to go. The bright-orange helmets of the Optum riders are clearly visible at the front of the chasing pack. When someone points out the gap, Aaron says, “They’ll catch ’em.”

When his team has not closed the gap with seven laps to go, Aaron says, only half-jokingly, “Maybe I’ll go back to the trailer and throw garbage cans.” He shrugs. “I like to win.”

Still, Aaron somewhat reluctantly makes his way to the finish line with his fiancé during the final lap. Optum manages to catch the breakaway in the penultimate lap, and the riders storm to the finish line in a bunch sprint. Aaron stands with his arms folded. The yellow jersey, belonging to the overall race leader, and a black Optum jersey, worn by Ryan Anderson, hit the line, seemingly simultaneously. Officials take a moment to review the photo finish. Aaron waits with his arms folded.

When the announcer finally declares Anderson the winner, Aaron raises his hands above his head and then claps. Bebchuck shouts “Yea!”

She hugs him. Finally, he smiles.

John Rosengren is an award-winning journalist and former amateur cyclist.