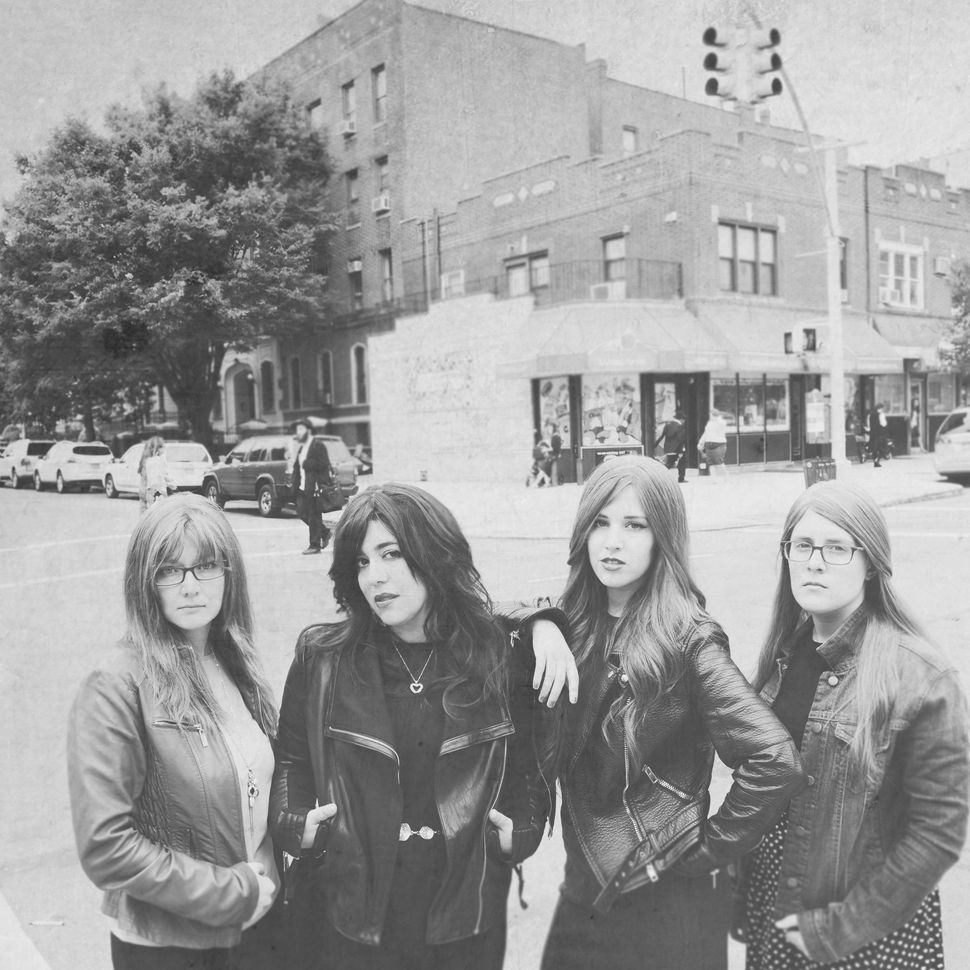 The only difference between this Chasidic girl band and their secular counterparts is that their audience is female — at least that’s the official consensus. That’s not to say that all the women are Jewish.

As Hasidic women, the band’s musicians cannot play for men because of the modesty prohibition of kol isha, which dictates that a Jewish man should not hear a woman sing if she is not related to him.

Wolfe and Shusterman formed the band in 2011 after each rediscovered their religion and moved to Crown Heights, Brooklyn. Now, five years later, the band has two additional members, and is releasing their second album to a growing fan base.

“We have all grown a lot—as far as playing confidently, I think we’ve gotten tighter,” Wolfe said in an interview with the Forward. “If you listen to the album we just put out, there’s a lot of different styles that come through and I think that will always be the case. We have an eclectic taste in music, and you can hear that.”

The band says that their music mixes a genre of jazz, funk, rock and classic Hasidic melodies.

With all four band-members busy with part-time jobs (two of them are also mothers), the band decided to use Kickstarter to fund their new album.

““We had talked about doing a fundraiser campaign for a really long time. And it was just a matter of finding the right time and the right focus,” Wolfe said.

The support was overwhelming. Most surprising: many of those supporters were men.

“I think it’s cool how many men we have on Kickstarter, because for them it was like an opportunity to get involved. They can listen to the music but they can’t come to the shows, so it’s cute,” said Wolfe.

So, what was the financial strategy behind Kickstarter?

The group’s no-men-allowed rule has led some critics to accuse Bulletproof Stockings of being man-hating feminists. But Wolfe and Shusterman shun these allegations as ridiculous.

They have also received some complaints from Orthodox Jewish mothers, “who feel like their daughters don’t really need what we put out there.”

The girls say that what they most try to accomplish is creating a safe space for women to feel uninhibited and enjoy their music.

Wolfe added, “That’s one of our biggest compliments, when people come over to us and say, “I’m not here just because the music is Jewish, I’m not listening to it just because it’s kosher, but because I’m actually enjoying it.” Bulletproof Stockings hope their story may also inspire other religious women to follow their dreams regardless of their faith.

Shusterman stated, “There was a woman that contacted us, because her daughter’s drum teacher told her daughter that she wasn’t going to be able to play with a skirt and asked how I deal with this. I said, “What are you kidding me? That’s the only way I play!”