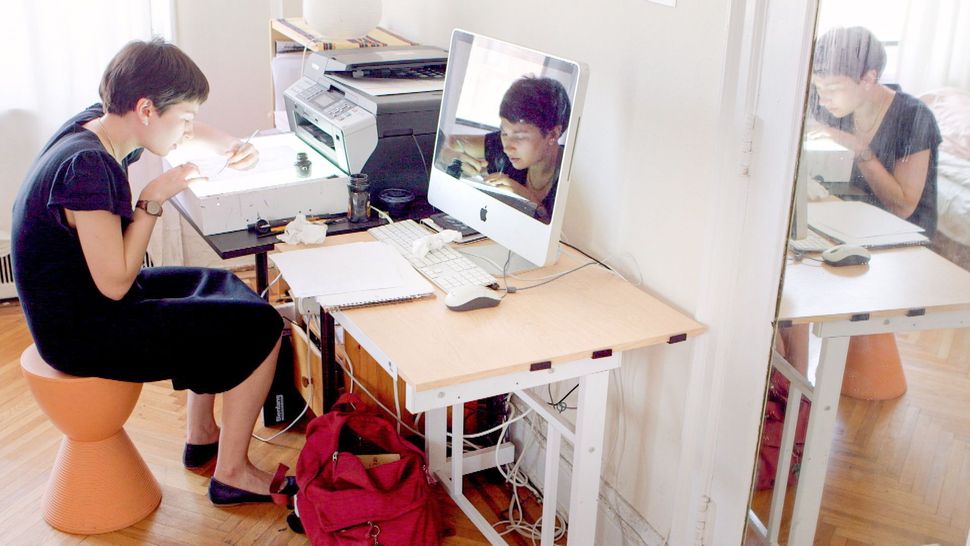 Before a recent screening of “Very Semi-Serious: A Partially Thorough Portrait of New Yorker Cartoonists” at HBO’s headquarters, director Leah Wolchok introduced her debut documentary. Standing behind a mahogany podium and wearing white thick-rimmed glasses, she spoke with a slight undertone of annoyance about how long it took to finish the film. So long, in fact, that she had a baby, “and then another one,” and also moved to Paris. But, she added, had she not experienced these life landmarks — becoming a mother, living abroad — her film, which chronicles the cartoon department at “The New Yorker,” might not have delved into the more somber aspects of that mostly humorous life.

The cartoonists in the documentary are charming and odd, much like the characters they draw. We meet Ed Steed, a blonde Swedish-looking man with soft, feminine features who always wears gray T-shirts, and Roz Chast, who avoids the outdoors and collects canned food. They struggle with rejection and pull material from the depths of their childhood, back when peers teased them and some felt invisible. Cartooning provides an outlet for their expression, but is also the source of their anxieties.

Wolchok spoke to her subjects, including Bob Mankoff, the cartoon editor at The New Yorker, in their homes. These personal settings offer helpful context: We see binders full of unpublished work and Chast’s affinity for ironic 1950s advertisements. We watch as one particularly contemplative artist quietly dips a brush into gray watercolor paint and sweeps it across the page.

The simple conversations, and the way the camera lingers on each subject, waiting to catch a slight dimming of the eyes or sigh, provides insight into these cartoonists’ struggles.

The cartoonists, including Liana Finck (who draws for the Forward), Emily Flake, Mort Gerberg and Chast, among others — are really just a lead-up to Mankoff, who holds the power to make, break or strengthen his protégées and does so with both father-like tenderness and brutal honesty.

Each Tuesday, established and aspiring cartoonists line up outside his office and bring him their week’s portfolios. Mankoff reads hundreds of cartoons, but only 15 make it into the magazine after New Yorker editor David Remnick chooses the final batch.

The cartoonists walk into Mankoff’s airy office and sit in front of his desk as he sifts through 8-by-11-inch drawings and wait for his reaction. Will he call their sketches clunky? Will he read the caption, “Pants are the new sweaters,” and say, “No they’re not,” before slamming the cartoon facedown on the desk?

Mankoff, 71, resembles a skinny caricature with wild silver hair, a trimmed goatee, and wide lips. He grew up in a wealthy Jewish family in Queens, though we don’t learn much about his childhood beyond that. Amusing black-and-white photographs of him at his bar mitzvah holding wads of cash or reading an advice book about women, surrounded by women, briefly flash across the screen.

He graduated from Syracuse University in 1966 and enrolled in an experimental psychology Ph.D. program at Queens College, but later dropped out.

“I was so close to being a ‘doctor’ that I could taste it, but it didn’t taste good,’ he writes on his website. “My gift for laughter and my sense that the world was mad were rapidly dissipating, as I learned more and more about what I was less and less interested in. And my experimental animal, a rat, had no sense of humor at all.”

He became the cartoon editor at “The New Yorker” in 1997 and has published 950 drawings in the magazine.

Mankoff and his wife, Cory, are coping with the death of her adult son. In an interview at the couple’s kitchen table, Cory talks about being unable to live in their home —there are too many memories, she says. In this scene, Mankoff lets Cory talk, but rests his hand on her shoulder. After the next cut, we follow him alone to work, weaving beneath scaffolding on a dreary day. In a voice-over, he talks about the difficulty of grappling with the loss. He walks into his office, where a pile of drawings awaits, and sits down.

The revelations that comedy masks sorrow and pain or lifts us out of reality aren’t new. But what makes “Semi-Serious” worth watching is that it documents the one magazine that still elevates cartoons and cover illustrations as both art and provocative commentary on society, much like the award-winning journalism they appear next to.

When Wolchok finished her speech, she expressed a hope that the audience would find the film enjoyable as well as heartwarming.

In that, she has succeeded.