This Is Where Jewish American Art Began 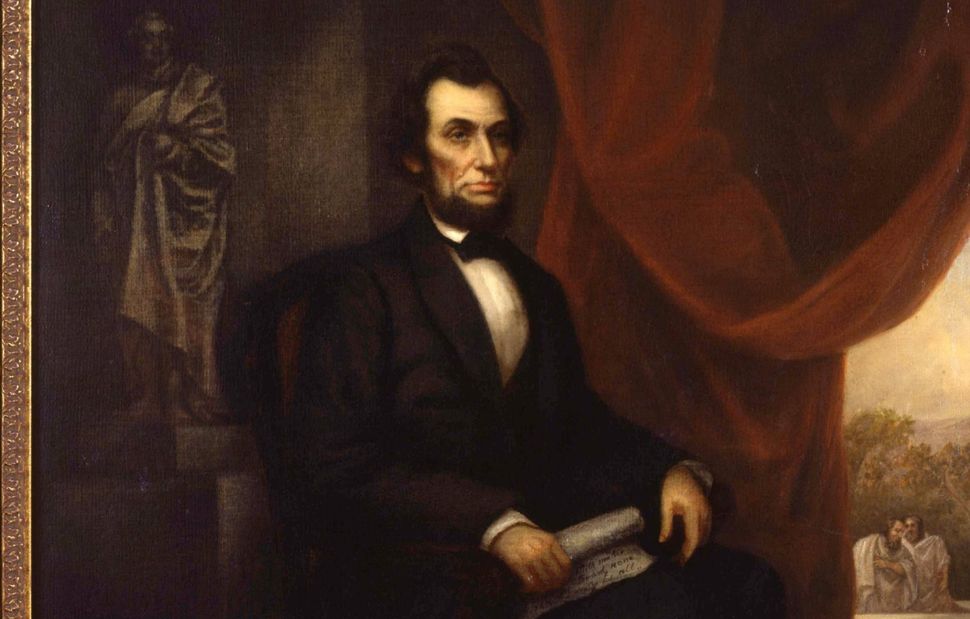 While perhaps not a truth universally acknowledged, it is an outcome reasonably anticipated that if a museum holds opening-day festivities for a new exhibit on Valentine’s Day and the thermometer outside registers a cool 3 degrees, it is unlikely to attract many visitors.

Not so for the Princeton Art Museum, which celebrated the opening of “By Dawn’s Early Light: Jewish Contributions to American Culture from the Nation’s Founding to the Civil War” on February 14.

The day’s agenda — a panel and a lecture exploring the exhibit and its historical context — drew crowds large enough to fill not only all the seats in an auditorium but also its standing room section. When I met with the exhibit’s curators, Adam Mendelsohn and Dale Rosengarten, for an interview in the gallery, a crowd gathered around us, listening eagerly — even interjecting their own questions.

The message was clear. There is an enormous appetite for information about early American Jewry, and very little material publicly available to feed it.

“By Dawn’s Early Light,” originally shown in 2014 at the Center for Jewish History in New York City as a display of early Jewish American texts in the collection of Princeton alumnus Leonard Milberg, now presents the original texts alongside visual art and Judaica. The exhibit opens with two paintings: Solomon Nunes Carvalho’s “Kahal Kadosh Beth Elohim, Interior,” a from-memory depiction of the Charleston synagogue destroyed in an 1838 fire, and Theodore Sidney Moïse’s “Penina Moïse,” a portrait of the artist’s aunt in front of the flames of the same burning synagogue. The two form an invigorating introduction to two of the exhibit’s primary themes: the post-Revolutionary birth of a new, distinctly American Jewish culture, and the sometimes violent ideological divisions sparked by that development.

“Much of the stuff [in the exhibit],” Mendelsohn said, “is a product of this extraordinary moment when Jews are grappling with something we take for granted, which is living in a free society, and having multiple identities. That’s a new problem that Jews haven’t really had the pleasure of encountering before this point in time.”

After the Revolutionary War, American Jews lost no time exploring the possibilities afforded them by their new status as free and equal citizens, a status critically informed by the fact that Jews were largely considered to be white. (Exceptions included Caribbean Jews, who frequently came from mixed-race families.) The fire that inspired Carvalho and Moïse’s paintings helped energize the start of American Reform Judaism, which established one of its first strongholds in the synagogue once it was rebuilt.

The synagogue’s home, Charleston, was a bastion for Jews, one of the most religiously tolerant cities in the states. Carvalho and Moïse were both born there; Carvalho remained a traditional Jew his whole life, became an abolitionist after growing up in a household with slaves and adopted the early photographic art of the daguerreotype, traveling west with the explorer John Fremont and taking the first photographs of the U.S. frontier. Moïse, after a first Jewish marriage, wed a Catholic and started a very large Christian family — although he never renounced Judaism — and became a devoted Confederate.

As American Jews took their lives in disparate directions, so they expanded their art. Working in a variety of mediums, new and old — paint, photography, and relatively new forms of printed texts — artists and writers both struggled with and reveled in the opportunity to have their art reflect, and reflect upon, multiple facets of their new identities.

In the visual arts, a sense of a prevailing identity quickly emerged.

“If you look, especially at the art in this show, this is American art,” Rosengarten said. “These people became Americans so fast.”

Indeed, the exhibit’s art seems to lack an explicitly Jewish interest. Carvalho and Moïse painted portraits and landscapes, uniquely American, and informed by European artistic tropes; a Carvalho portrait of Lincoln features, in the background, the figure of the Greek philosopher Diogenes, who has dropped his lantern in shock at the discovery of an honest man. If there are Jewish angles to be found, they’re extremely subtle. As we stood in front of Carvalho’s Lincoln, Rosengarten hesitantly suggested that our audience take a closer look and said, “see if you think he looks Jewish.”

The texts in the exhibit shed greater light on the deep ideological and cultural differences that were transforming the Jewish community. A prevalent theme among these texts, and one that will be familiar to Jewish audiences encountering them, is that of profound anxiety over the fate of Judaism and Jewish culture in the free world. Previously, tradition bound Jewish communities together, helping strengthen them against antagonistic outside forces. With those forces removed — or at least substantially reduced — Jewish intellectuals and religious leaders were painfully aware that the attraction of that attachment, no longer necessary for survival, was decreasing.

“Freedom,” Mendelsohn said, “allows them to choose to be Jews or not to be Jews.”

Another challenge to Jewish identity stemmed from American acceptance of Jews as white.

“They embraced that skin privilege big time,” Rosengarten said, “and became traders and owners of slaves, and profited from the whole system.”

During the panel discussion later in the day, a contributor brought up the question of what it might have meant for Southern, slave-owning Jews to celebrate Passover. Like Carvalho and Moïse, one an abolitionist, the other determinedly not, American Jews were split on the question of slavery. Their newfound ability to hold the same power over others that was once held over them caused a moral schism that had a significant impact on the political, cultural and social development of American Judaism.

The visitors who flocked to the exhibit’s opening may have found themselves disappointed with their ancestors, and disappointed by the fact that early American Jewish art and literature showed an identity in conflict. On the other hand, it’s somewhat reassuring.

“No one would call that Jewish art,” Rosengarten said, pointing to one of Moïse’s late paintings, a portrait of his sole Jewish granddaughter, “but there is a Jewish story there.”

This Is Where Jewish American Art Began