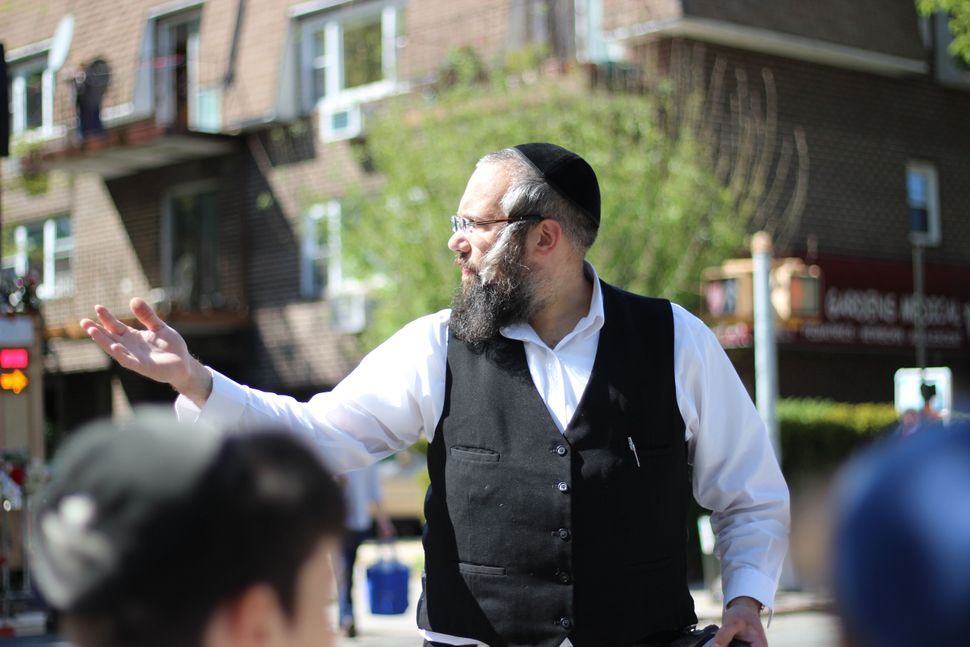 I found Rabbi Shulem Korn in Queens as he was assembling one of his famous Torah Trucks. A white pickup was hooked to an ornately decorated trailer, a dramatic scene of Mount Sinai, surrounded by lightening, emblazoned on the side.

I’d been trying to track down the rabbi for months, celebrated in New York for his Torah dedication ceremonies, but he’d been too busy to take my calls — the Torah business, he explained, was booming. 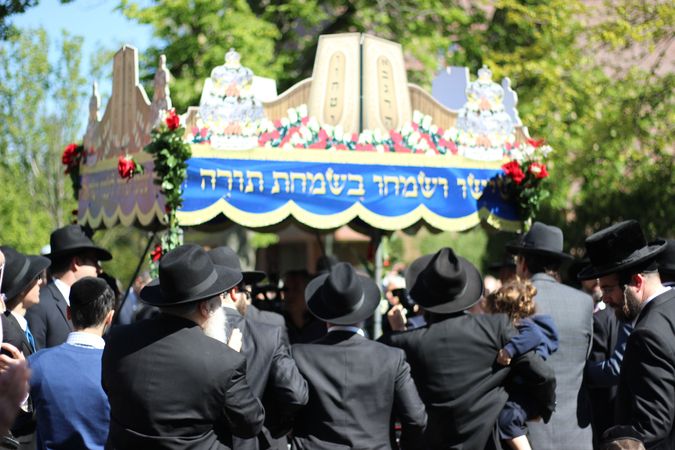 Holy Business: A crowd in Kew Gardens gathers for a Torah dedication ceremony underneath a canopy. Image by Sam Kestenbaum

But Korn had finally texted me an address, in Kew Gardens, where he would be holding one of his Torah parades — part sacred rite, part block party — and he said I could come for a ride-along.

In front of us, a Torah Truck took shape. A ceremonial canopy was assembled; speakers and a keyboard unpacked. The set-up just needed the final touch. Korn excused himself and disappeared inside the vehicle, reaching in the maze of electrical wires. He flipped a switch and huge red crown, blinking with lights atop the trailer, began to move in slow circles. 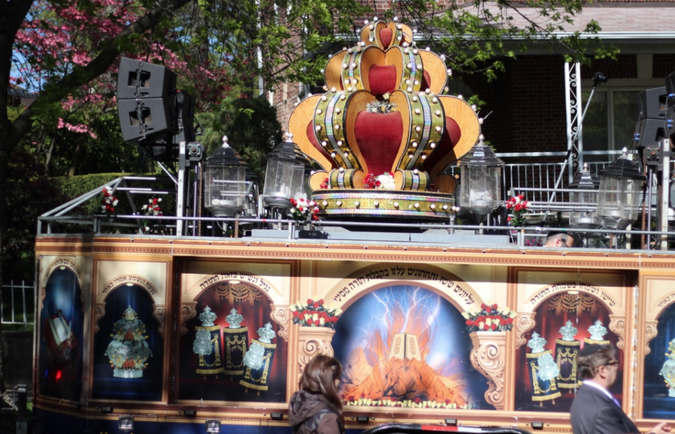 For months, I had seen Korn and his fleet of trucks from afar, rolling down Brooklyn streets, lights flickering from their roofs, thronged by dancing Hasids in Orthodox neighborhoods. One afternoon I pulled one man aside to ask what the party was about. What were these trucks that turned otherwise sleepy neighborhoods into holy block parties? Hebrew music, synthesizer wailing, echoed for blocks.

He was surprised I didn’t know. “This?” he said. “That’s Rabbi Korn, the king of the Torah Trucks.”

Korn helps communities celebrate a sacred occasion: the “bringing in” of a new Torah. It can take over a year to fully write a Torah, a long, meticulous process done by hand. The Torah’s completion, often dedicated to an individual or community, is akin to other life cycle events, like a bar mitzvah or wedding. 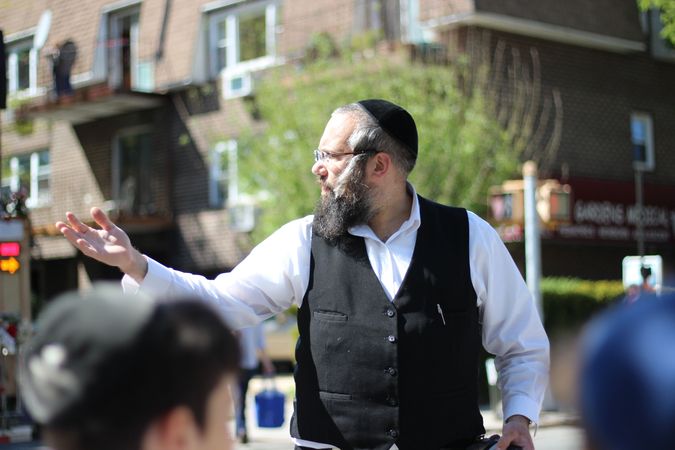 When a Torah has been inscribed, Korn will ferry the sacred scroll from the scribe to synagogue, where it will be housed — this might involve a longer drive, or simply a slow parade down one or two blocks.

What’s more, Korn has a corner on this niche market.

No one else on the East Coast holds events quite like this. Jews of all denominations and stripes — Satmar, Lubavitcher, Bobov, Modern Orthodox, Conservative — go to Korn when they need a Torah party. A trained musician, Korn plays the keyboard and is often accompanied by a singer. While one of his assistants drives the truck, Korn stands in the back of the trailer, presiding over the revelry.

Korn said he’s traveled as far as Canada and Florida to host parades, but it’s really in New York’s Orthodox enclaves that he finds most of his work.

Around fifteen years ago, some of his community had their doubts about whether his enterprise would take off, he confided.

The first parade Korn organized was during the Second Intifada. A New Square man’s wife and young child had been killed in a deadly bus attack in central Jerusalem; a Torah was being written and dedicated in their honor. 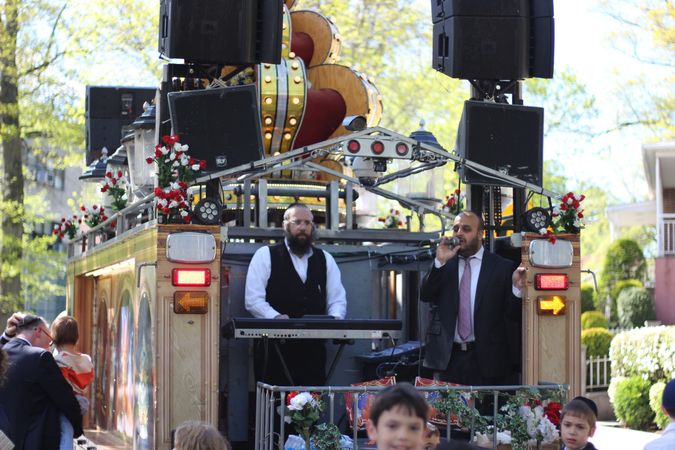 “What can we do to make something special for them?” Korn asked. Along with his brothers, who helped launch the business and still help with his operation, they organized the ceremony.

At the beginning Korn and his brothers might only hold five ceremonies a year; now they happen almost every weekend. He keeps his trucks in a garage in his hometown of Monsey, where he has his workshop. Ceremonies cost anywhere from $1,000 to $3,000. He now has two trucks; a third is in the works. In total he has a crew of seven.

Korn had along two helpers, quiet Hasids from Monsey named Moishy and Chaim, just old enough to have started growing mustaches. Korn gave orders in Yiddish into a walky-talky. “These are my best guys,” Korn said, as he gestured where to place the canopy.

A crowd had formed outside the Shaare Tova Synagogue, milling in the grass, waiting for the parade to kick off. Korn’s walky-talky buzzed and he carefully backed up the trailer. Inside, the final touches were put on the Torah; community members lined up to sit with the Torah scribe, posing for photos. Some drank whisky and vodka and patted each other on the back. 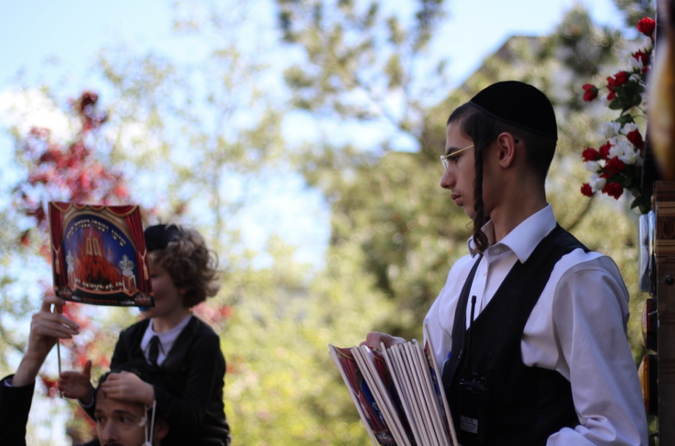 Helping Hand: Chaim Shpira, one of Korn’s assistants, hands out flags to the crowd. Image by Sam Kestenbaum

The Torah was carefully rolled up and carried outside. On cue, the two young men from Monsey hopped in the bed of the truck; Korn took his place at the keyboard. Children were hoisted on shoulders and the dancing began.

The streets had been temporarily blocked off and the crowd filed down the middle of the road. Traffic came to a halt.

The truck began a slow crawl uphill as the singer, a clean shaven man with a yarmulke, ran through crowd favorites. One of Korn’s assistants hopped out of the truck and passed out flags for the children to wave.

Passersby stopped and gawked. One Hispanic man, walking his dog, looked confused. “I’ve never seen anything like that,” he said. “But it’s beautiful.”

Korn wore a look of extreme focus. He had envisioned this entire production — designing the truck and canopy and engineering the sound system, altogether it might take $100,000 to build one of the trucks and trailers — but now Korn seemed to turn inward, focused only on the music.

Local rabbis danced arm in arm. This was a Modern Orthodox community, so women were also participating, dancing (carefully, with high heels) in their own circle alongside the men.

One man who helped with the organizing, Rabbi Chaim Eli Welcher, seemed pleased. He adjusted his fedora in the sun. “I was worried about the weather,” he said. The morning had been overcast. “So I asked Rabbi Korn if he had plans for what would happen if it rained. The rabbi told me, ‘I could write a novel about the number of times it rained and the morning and the sun came out.’ So we went ahead.” The parade lasted no longer than half an hour.

Reaching their destination, Yeshiva Tifereth Moshe, the Torah was carried into the basement amidst more dancing.

Korn finished the final number, dismounted the trailer and let his helpers dismantle the setup. “I had no competitors to look at and copy when I designed all of this,” he said. Within a few minutes the entire trailer had been broken down, packed up and covered with a tarp. “It all fits together like a puzzle.”

New York’s king of the Torah Trucks rested in the shade for a moment as the crowd dispersed, some stopping to shake his hand or take down his number.

Years ago, some of Korn’s peers had their doubts about whether these Torah parades would take off. “People didn’t think you could make a business out of this,” Korn said. “It’s a new kind of business — not like a drycleaner or a grocery. It’s holy business.”