Why Sephardic ‘Othello’ Is a Dream Come True 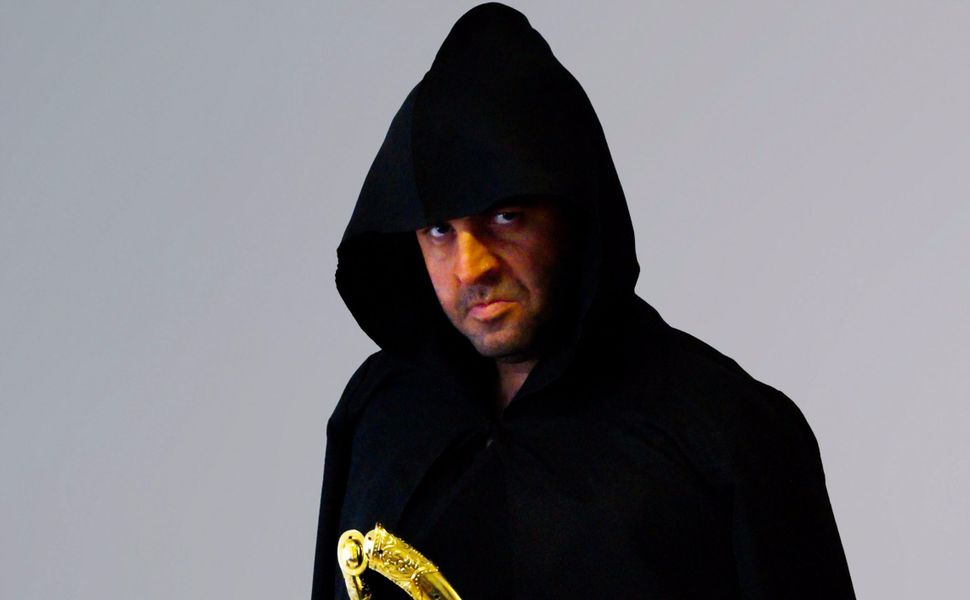 Image by Courtesy of David Serero

Beginning on June 16, the actor David Serero will portray the title role in Shakespeare’s “Othello,” presented by the American Sephardi Federation at the Center for Jewish History. We invited Serero to discuss the challenges of playing Othello in this production, which will feature Jewish Moroccan music.

Othello is an actor’s dream role. I first encountered the part through the opera version by Verdi that I saw at the Metropolitan Opera in 2003. The story and the character fascinated me. When I look at how Iago can poison Othello with a lie and push him to murder, I can’t help but think of modern terrorism: it all starts with a lie, and perhaps jealousy.

For me Othello is superhuman. I love his rage. You can feel the blood boiling in his veins; he is a man given to excess in everything, whether in his anger or with his love. He is strong in his command but socially insecure. This is why he can’t have a conversation with Desdemona and can’t hear her explanations. The way I portray Othello is that I try to show how much he loves his wife Desdemona. He adores her, worships her. He must love her so much in order to kill her.

This production is unique, because for the first time we will return “Othello” to its roots, back to Morocco. The production will feature Moroccan music. I want to explore the Moroccan aspect of the play, returning it to Shakespeare’s original idea of using the inspiration of Abd el-Ouahed ben Messaoud, who was the ambassador of the Moroccan / English alliance in 1600. Shakespeare was very intrigued by this man, his clothes, costumes, traditions, looks and his darkness, which I want to explore.

Our «Othello » will also include arias from Verdi’s Othello, set to Arabic musical arrangements. It will be the first time that both Shakespeare’s “Othello” and Verdi’s “Otello” will blend on the same stage. One of the instruments that shall be used to depict Othello’s raging heartbeat is the Darbuka, an Arabic percussion instrument.

One of my favorite moments in the play, and certainly one of the most dramatic, is when Othello tells Desdemona he understands that she betrayed him by sleeping with Cassio and, therefore, has killed him. When Desdemona weeps at the news of Cassio’s death, Othello is struck even more deeply, as if there were more than 20 swords in his chest and asks, “What, you are crying for him in front of my face ?”

Othello is a man of respect and outraged, strangles her to death. Once he realizes that he’s killed her for a baseless reason, and that Iago lied about everything, he delivers the most beautiful monologue, one which I have often used for auditions : “Soft you a word or two before you go.” He decides to kill himself, and joins Desdemona in a last breath saying, “I kiss thee here I killed thee, no way but this, killing myself to die…upon…a…kiss…” and dies.

By killing Desdemona, Othello has destroyed the best in himself.

Othello is the most honest, brave, courageous, faithful (remember that he never cheated on Desdemona) that I have ever played. Othello is not a criminal. He is a man of honor who loved his wife, perhaps too much. This is a true love story, one of the most beautiful ever written.

The subject of race in “Othello” has been discussed for a very long time. Some say it’s a racist play. I really don’t think so. The same way I don’t think “The Merchant of Venice” is an anti-semitic play, after having played Shylock in 2015 and 2016. For sure, Othello is a stranger in the land he is living. He is not the son of a rich king but a general who has fought all his life in order to gain his title and gain the respect of his troops.

I hope to deliver an interpretation of Othello that is different, and bring a new understanding to this complex character. I intend for my interpretation of “Othello” to be personal, with roots in my own heritage : my dad was born in Morocco and instructed me in the ways of Jewish Moroccan culture. It is a little-known fact that numerous songs in the Arabic song repertoire are Judeo Arabic songs by such composers as Salim Hallali. And I will sing one of those songs as Othello.

I’m deeply honored and proud to present Sephardic culture in such a classic work by the greatest writer ever : William Shakespeare. I would have never imagined singing those Judeo-Arabic songs (which I constantly listened during my childhood in Paris) in New York where the Ashkenazi & Yiddish culture is more present. That alone will make me very emotional on stage. That, combined with the fact that I will be playing one of the greatest character ever written Othello, in the the greatest city in the world New York. To use Shakespeare in order to showcase that Sephardic culture is a dream come true. Even though times are difficult for Jews in the Arab world, we must never forget that culture of Jews and Arabs at the height of their relationship, especially in Morocco. Where the King Mohammed V refused to deliver his Jews to Hitler and replied “If you take my Jews, you’ll have to take me first.” By playing Othello, I am also paying a tribute to this culture and time.

Why Sephardic ‘Othello’ Is a Dream Come True