When Leonard Cohen Crooned for Israel in Its Darkest Hour 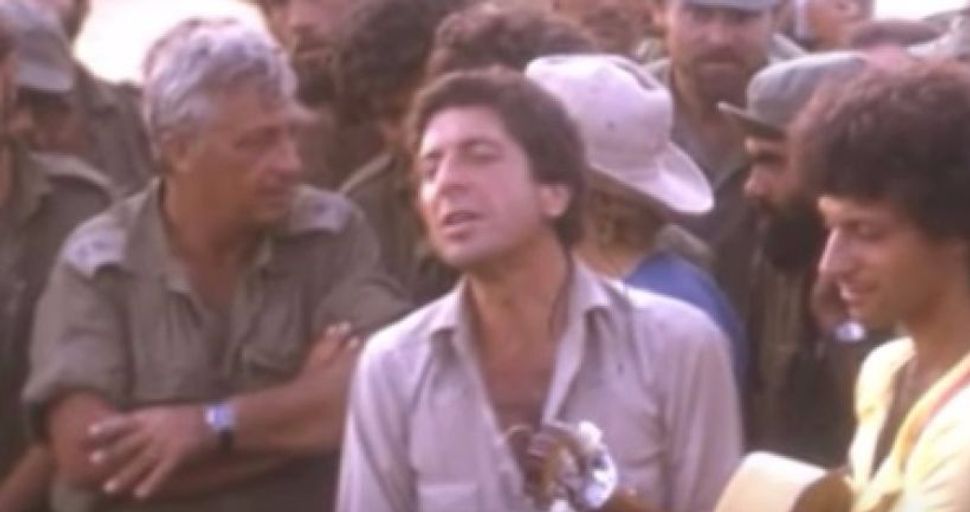 It wasn’t only that his sad and beautiful lyrics resonated so strongly with them. And it wasn’t only because he was a fellow member of the tribe. Leonard Cohen, who died on Friday at the age of 82, has long held a special place in the hearts of Israelis, thanks in large parts to his extraordinary act of solidarity during one of their darkest moments.

In October 1973, when the Yom Kippur War broke out, Cohen was living on the Greek island of Hydra with his partner Suzanne and their son Adam. Wanting to lend his assistance to the Jewish people but not knowing exactly how, he boarded a flight to Tel Aviv, hoping to volunteer on a kibbutz. Israel’s collective farms were facing a severe manpower shortage at the time because most able-bodied men had been called up to combat.

He was sitting at a cafe on Tel Aviv’s famed Dizengoff Street, engaged in conversation with a well-known Israel actor, when the Canadian songwriter and poet was recognized by one of his local admirers, the singer Oshik Levi. Levi approached Cohen and asked what he was doing in Israel. When Cohen relayed his plans to volunteer on a kibbutz, Levi immediately dissuaded him, saying he could put his talents to much better use elsewhere. Why don’t you come join me and some friends who’ll be performing for the troops in the Sinai? Levi suggested.  Cohen was initially reluctant. He didn’t think his sad songs were the best way to boost the morale of the troops, he said. “I told him that everything will be alright,” Levi later recounted in an interview with i24News.

Levi was part of a band known at the time as “The Geneva Conference,” which included one of Israel’s most talented musicians, Matti Caspi. For the next few months, Cohen joined them as a singer, with Caspi accompanying him on guitar as they made the rounds performing for Israeli troops during the Yom Kippur War. A recently unearthed photo taken near the Suez Canal at the time shows Cohen standing between Caspi and the controversial general who would many years later become Israel’s prime minister – Ariel Sharon.

It was after his first performance in the Sinai that Cohen, according to various accounts, found himself a relatively quiet corner and scribbled down the words to what would later become one of his popular songs. He emerged with a piece of paper on which were written to words to “Lover Come Back To Me” and which was performed there in the Sinai Desert during the Yom Kippur War for the very first time. Also known as “Lover, Lover, Lover,” It ends with the following words:

And may the spirit of this song, may it rise up pure and free. May it be a shield for you, a shield against the enemy.

Cohen would later say he wrote “Lover Come Back to Me” for soldiers on both sides of the battle lines – Israeli and Egyptian. But at a performance in Tel Aviv in 1980, he said it was inspired “by the grace and the bravery of many Israeli soldiers at the front” and described his experiences with the troops during the Yom Kippur War as “invigorating and depressing.”

The song was eventually included in his 1974 album “New Skin for the Old Ceremony.” That album also included another well-known song believed to have been influenced by Cohen’s Yom Kippur War experiences: “Who By Fire?” That song is based on the words of the Hebrew prayer, “U’netanneh Tokef” – recited on the Jewish High Holy Days.

When Leonard Cohen Crooned for Israel in Its Darkest Hour