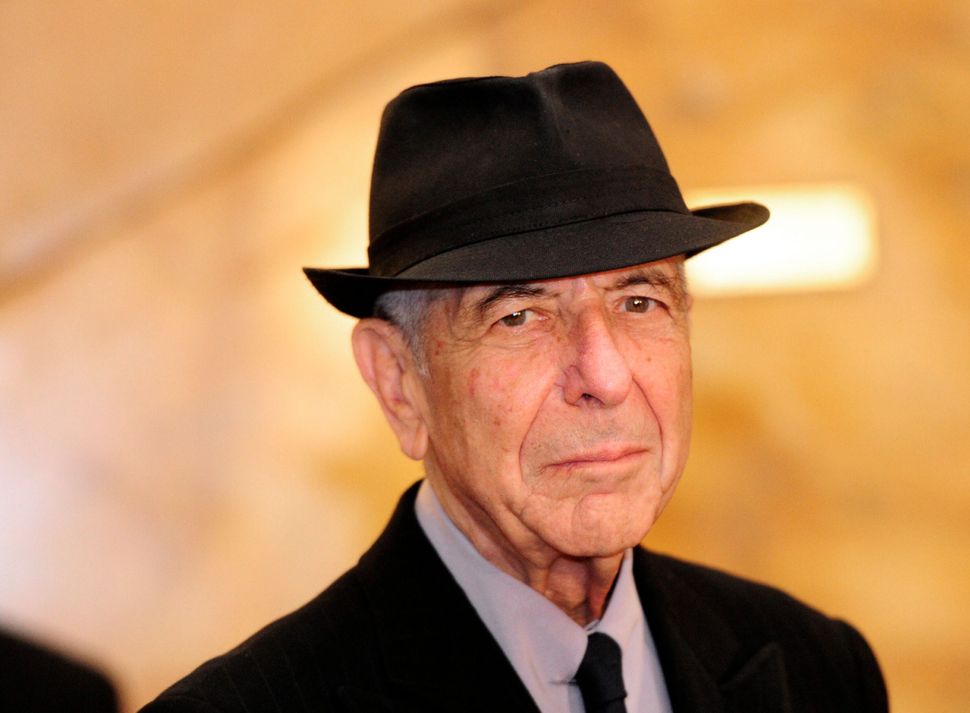 The Montreal-born poet, novelist, and folk-rock singer-songwriter is widely regarded as one of an elite few songwriters whose work transcends all the rest; in the wake of Bob Dylan’s recent Nobel Prize for Literature, Cohen’s name was most frequently mentioned as another perhaps deserving of the prize, along with Joni Mitchell and Paul Simon.

Cohen came to songwriting relatively late. He first made his mark as a poet and novelist in Canada in the early 1960s, with poetry volumes titled “The Spice-Box of Earth,” a reference to the ritual spice-box for the end of the Sabbath, the Havdala besamim, and “Flowers for Hitler,” which in poetry did for Adolf Eichmann what Hannah Arendt’s “Eichmann in Jerusalem” did in prose — made the Nazi official out to be a pathetic but ultimately banal cog in the wheel of destruction.

Frustrated by his lack of an audience beyond the Canadian literati, however, and inspired by the example of Dylan, Cohen saw a more efficient way to get his work across, and so he picked up his guitar and set his poems to music. One of his very first songs, “Suzanne,” was recorded by Judy Collins and included on an album of songs by Dylan, the Beatles and Randy Newman. In short order, Cohen found himself near the top of the rock-songwriter pecking order.

As I wrote in my essay, “Leonard Cohen’s Mystical Midrash” for Hadassah Magazine (April/May 2015), for the most part, Cohen has been seen, somewhat correctly, as the bard of gloom and doom. His recordings have even been called “music to slit your wrists to.” But there’s something much deeper than depression — from which Cohen suffered throughout his life — buried in his songs. He explores the human predicament, the brokenness or, in an allusion to the Creation story of Lurianic Kabbala, that the mystically inclined Cohen made in “Anthem,” a song on his critically acclaimed 1992 album, “The Future,”

There is a crack, a crack in everything
That’s how the light gets in.

Cohen’s priestly name offers merely a hint of his yikhes — on both sides of his family he is descended from rabbinic scholars, and his ancestors were integral to the founding of Montreal’s modern Jewish community. Like Dylan, Cohen grew up at the very center of his town’s Jewish communal life, with a strong Jewish home life that included a grandfather who studied Talmud every day and who, in Cohen’s case, quizzed him on the Book of Isaiah. Those lessons stuck with the budding poet, and the legacy of that youthful education in the Bible and the prophets infused his work, giving it the extra power and gravitas that comes from being immersed in the prophetic.

Cohen told an interviewer in the mid-1980s, “I think that I was touched as a child by the music and the kind of charged speech that I heard in the synagogue, where everything was important. The absence of the casual has always attracted me.” The “absence of the casual” may well be one of the singular characteristics setting Cohen’s work apart from his so-called contemporaries. There was, for example, no teenage petting or casual sex in his songs; there was only coupling of intense longing, amour, or betrayal.

Cohen’s songs drew deeply from the well of Torah for themes, symbols and inspiration — although much of this was likely lost on the majority of listeners. Cohen’s midrash-in-song worked in several ways: It paraphrases a Bible story, such as with “The Story of Isaac,” in which he sings, “You who build these altars now/ To sacrifice these children/ You must not do it anymore.” Or it could be a hymn-like recitation of key biblical lines, for example, “Whither thou goest I will go/ Whither thou lodgest I will lodge/ Thy people shall be, My people” from the song “Whither Thou Goest,” based on the Book of Ruth.

Cohen’s most famous song, “Hallelujah,” begins, “I’ve heard there was a secret chord/ That David played, and it pleased the Lord….” That song has been the subject of a BBC Radio documentary and a full-length book — one wit called it “the ‘White Christmas’ of dark and moody songs.” In some sense, Cohen’s entire career can be seen as a lifelong attempt to find that secret chord about which he sang.

Cohen was a restless seeker of that spiritual chord, and his journey included five years on a California mountaintop Zen retreat, where was ordained as a Buddhist monk. He also is said to have flirted with Scientology. According to the New Yorker, he once said, “Anything, Roman Catholicism, Buddhism, LSD, I’m for anything that works.”

Just a few weeks ago, Cohen released “You Want It Darker,” which in hindsight will undoubtedly be paired with the late David Bowie’s final album, “Blackstar,” which came out just two days before the rock star died last January. Bowie’s recording was a prescient if not planned meditation on imminent death and the afterlife; Cohen’s now seems to have been recorded in the same spirit.

“You Want It Darker” was also Cohen’s most Jewish album, replete with Hebrew lyrics; translated phrases from the Kaddish, the hymn of praise to God that appears throughout Jewish liturgy (most notably in the Mourner’s Kaddish); backup vocals by the all-male choir from the Montreal synagogue of his youth; and a cantor wailing an improvisational prayer, “Hineini” — “Here I am.”

Coming just a couple of days after Donald Trump was elected to be the next president of the United States, Cohen’s death will also inevitably be paired with that event — yet another seemingly prophetic measure on his part — in this case, an almost purposeful farewell, as if to say, “I’ve had enough. I’m outta here.” One that puts a listener in mind of some lyrics to his song, “Everybody Knows”:

A contributing editor to the Forward, Seth Rogovoy won a 2016 Simon Rockower Award from the American Jewish Press Association for his article “Leonard Cohen’s Mystical Midrash,” published in the April/May 2015 issue of Hadassah Magazine, parts of which are repurposed above.

The date of Leonard Cohen’s death has been amended to reflect the fact that the announcement was on November 10, but he passed away on November 7.