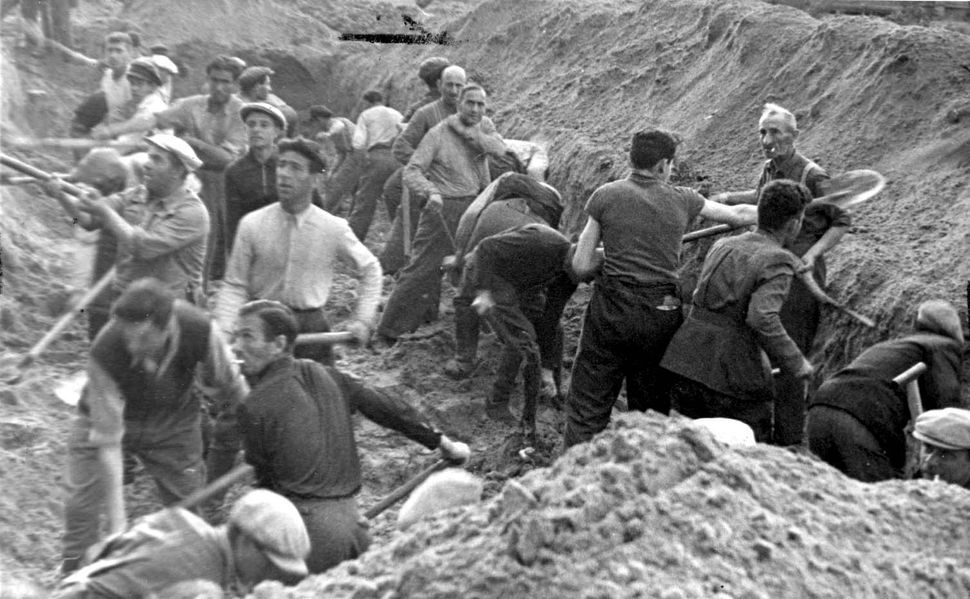 Image by Courtesy of Yad Vashem

“Holocaust Escape Tunnel,” the latest episode in the PBS science series “Nova” follows a group of scholars and engineers as they use the latest ground radar techniques to re-discover an important piece of Jewish history in Vilna.

Napoleon called Vilna (now officially Vilnius) the “Jerusalem of the North.” It was home to Elijah ben Solomon Zalman, better known as the Vilna Gaon, the Talmudic scholar and Kabbalist who encouraged his students to study science. Jews made up 40% of a city that boasted 100 synagogues, six newspapers and the largest Jewish library in the world. But then came the Nazis.

Dr. Richard Freund, professor of Jewish history at the University of Hartford, led the group that went to Vilna. Three years ago, he said in a telephone interview with The Forward that he was approached by Dr. Jon Seligman, a noted archeologist with the Antiquities Authority of Israel, who wanted to discover if any remnants of the Great Synagogue of Vilna might be found.

An architectural masterpiece built almost 400 years ago, the synagogue was destroyed by the Nazis and, after the war, the Soviets built a school on the site.

Freund was a logical choice for this assignment. His team had already completed about 30 similar projects around the world — in Israel, Greece and Spain and elsewhere — using new non-invasive technology for subsurface mapping originally developed for the oil and gas industry.

In 2015, Freund raised enough cash to do a preliminary survey, which revealed that part of the synagogue remained at a subterranean level. After additional fund raising, the project went ahead last spring.

Along the way, it took on two additional missions as well. The first was to see if the scientists could discover additional gravesites in the Ponar Woods outside the capital, where an estimated 100,000 people — 70,000 Jews — were systematically lined up and shot.

Freund and his team also wanted to locate a hidden tunnel through which a dozen Jews escaped slaughter in the last days of Nazi occupation. An earlier unrelated team had found the tunnel entrance in 2004 but inexplicably left it unmarked.

With the help of Lithuanian collaborators, the Nazis marched people into the woods, and shot them at close range. The significance of these killings went beyond sheer numbers. Historians agree that Vilna was ground zero for the final solution; the place where the Nazis learned how easy it was to eradicate a people.

Freund discovered the largest pit yet, one said to have held as many as 10,000 corpses.

The group was equally successful with the synagogue. That new sections were found was ironically attributable to church regulations. “At the time, ecclesiastical rule was that you could not build a synagogue at a height higher than the highest church steeple,” Freund said.

“So instead of building up, they built down. When you came into the Great Synagogue, you went down two flights of stair and that is what basically saved it.”

Eventually the team was able to dig down the two levels, where it discovered what they believe was a mikveh as well as numerous tiles, coins and other artifacts. 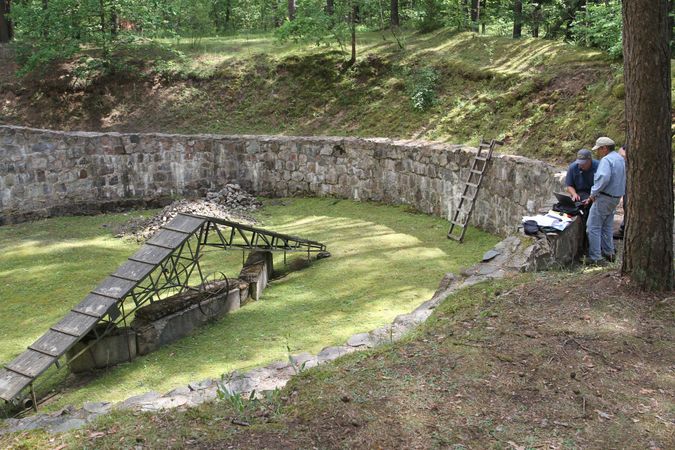 Discovery: The discovery of a secret tunnel that helped Jews escape the Holocaust in Vilna is the subject of the next episode of NOVA on PBS. Image by Courtesy of Ezra Wolfinger for WGBH

But it was finding the escape tunnel that most fascinated the world scientific community when it was announced last June. With the Soviet army approaching, the Nazis assigned a group of 80 Jews —- 76 men and four woman — to cut trees for firewood, exhume Jewish bodies and burn them to eliminate evidence of the atrocities.

Realizing that ultimately, they would also be killed, the group, which became known as the Burning Brigade, started to build a tunnel at night. Using only their hands, spoons and improvised tools, they created a 100-foot-long engineering marvel in some ways equal to the Great Synagogue itself.

On April 15, 1944, the last night of Passover, they broke out. Of the original 80, 12 made it and 11 survived the war. Freund argues that the discovery was well timed. With survivors dying and now even their children following them, in 20 years “how would we know if the testimonies of the people who survived were true or not. That’s one of the things science does. It allows us to give new life to testimonies of the Holocaust.”

Curt Schleier writes about pop culture for the Forward.