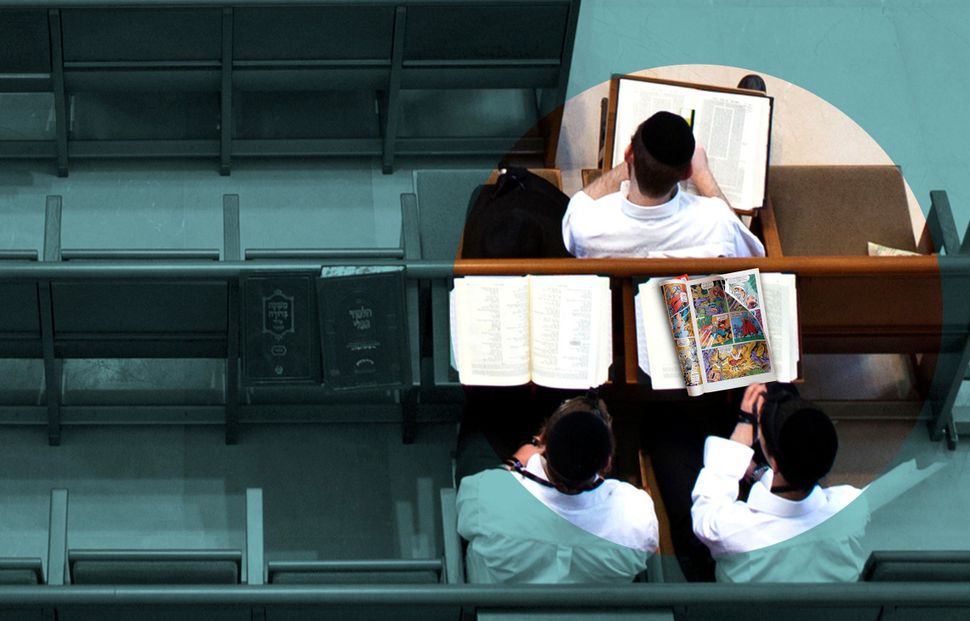 When Rabbi Edward Feld was a teenager, he decided to buy a seat for High Holidays services in a synagogue where no one knew his name. Feld was raised on Manhattan’s Lower East Side, and he says that there were always old synagogues that weren’t completely full even on Rosh Hashanah and Yom Kippur. By then, many Jews had begun to leave that famous immigrant enclave.

Feld took his seat in the far back corner of the room, and opened the shopping bag full of books he had brought with him.

Feld went on to be the senior editor of Mahzor Lev Shalem, a High Holidays prayer book published by the Rabbinical Assembly, the international association of Conservative rabbis. He designed the mahzor with extra readings so that people tired of the liturgy could have something to focus on.

With the mahzor, Feld said, “hopefully we provide them with enough material that they don’t have to bring a whole shopping bag.”

Often, the Days of Awe can quickly turn into the Days of Yawn. With extra prayers, special melodies and longer sermons, High Holidays services can seem interminable. At the point of exhaustion, some synagogue-goers might reasonably allow themselves to step out of the sanctuary and go for a walk. Others, feeling the intensity of the day -— or merely the peer pressure of a packed house — might choose to stay right where they are, nestle even more deeply into their pew and open a book.

From ancient rabbinic texts to dystopian novels, Jews across the spectrum of observance turn to extra-liturgical reading material during Rosh Hashanah and Yom Kippur services. For some, the books offer the chance to engage more deeply with the themes of the season: piety, purity, atonement and forgiveness. Others are just in it for the distraction, burying their heads in whatever book last landed on their bedside table. For many Jewish readers, there is more than one way to connect with a text during the High Holidays.

Jonathan Sarna, a professor of history at Brandeis University, said that he always brings a book to High Holidays services at his Orthodox synagogue — a practice he learned from his father.

“It is to ensure that my mind doesn’t wander too far away when the service is droning on in a way that perhaps doesn’t lead me in the spiritual direction that one would wish,” Sarna said. He says he brings a book that has relevance to the prayer service and that “can be defined, broadly speaking, as Torah.”

On Yom Kippur, Sarna, author of “Lincoln and the Jews,” will be reading “Social Change and Halakhic Evolution in American Orthodoxy,” by Chaim Waxman.

“It would be unthinkable for me to bring a secular novel, or a volume that had no Jewish content,” Sarna said. “There may be books that would be appropriate for a nightstand or for a bathroom, but not for synagogue.”

Other Jews observing the High Holidays are comfortable with more secular selections. Jonathan Adam Ross, an actor and playwright in New York, said that he always brings a book for the subway ride between his apartment and Lab/Shul, the non-denominational synagogue he attends for High Holidays services.

“Whether I take it out during the service depends on if I’m sitting within eye-shot of any kids I’ve tutored for their bar or bat mitzvah,” Ross said.

This year, Ross is on a dystopian fiction kick, something he says might be “related to present reality.” He’s currently reading Octavia Butler’s “The Parable of the Sower.”

Avi Allen, an attorney in Chicago, said he has fond memories of reading “Harry Potter and the Deathly Hallows” on Yom Kippur. It wasn’t about the magic in the novel per se. Allen said he “found Snape’s behavior to be one true example of teshuvah” — repentence.

Besides secular novels, there are a few undeniable classics of the tallit-bag book club that draw readers every year. The Israeli novelist S.Y. Agnon’s “The Days of Awe,” an anthology of Jewish texts about repentance and spirituality, is a perennial favorite. Readers also often turn to Rabbi Alan Lew’s “This Is Real And You Are Completely Unprepared,” a book about achieving spiritual clarity during the High Holidays, and Rabbi Simon Jacobson’s “60 Days: A Spiritual Guide to the High Holidays.”

The more erudite readers report flipping through older guides to the holidays, such as Maimonides’s “The Laws of Repentance,” called “Hilchot Teshuvah” in Hebrew. Rabbi Benay Lappe, head of the queer yeshiva SVARA, in Chicago, says that Maimonides’s 12th-century treatise is her “go-to book” for You Kippur.

“His Hebrew is simple and elegant,” Lappe wrote in an email. “And while there is some theology in it, Hilchot Teshuva is just that — a code of laws about how to engage in the mitzvah of doing teshuvah. It’s simple, it’s practical, it’s easy to see how it applies to your life.”

Though the classics remain in force, there have been a few breakout stars of the High Holidays reading period.

Ilana Kurshan’s book “If All the Seas Were Ink,” a memoir of learning the Talmud bit by bit for several years, was published only in early September but has already gained a small following. It recounts how Kurshan integrated the study of Talmud into her daily life, and how it provided perspective on her failed marriage and guided her to beginning a family.

Susie Chalom, a Jewish educator in Minneapolis, said that Kurshan’s book deals with many of the themes that she thinks about during the High Holidays, including finding one’s direction in life and love.

“Love in its various permutations. Romantic love, maternal love, disappointed love and my favorite, the love of text study that so many Jews enjoy,” Chalom wrote in a Facebook message.

Other people reported toting Jonathan Safran Foer’s new book, “Here I Am,” and “The Book of Separation,” a memoir of leaving ultra-Orthodox Judaism, by Tova Mirvis.

Though the trend of clandestine synagogue reading is mainly an under-the-radar phenomenon, publishers of Jewish prayer books seem to have taken notice. The latest crop of mahzorim have extensive notes and annotations explaining the liturgy. The “Koren Sacks Mahzor,” featuring commentary by the former chief rabbi of the United Kingdom, Rabbi Jonathan Sacks, was published in 2011. And Feld’s “Mahzor Lev Shalem,” published in 2010, intersperses quotes from Rabbi Abraham Joshua Heschel, Martin Buber and Israeli poets with the traditional liturgy in Hebrew and English.

Though Feld believes in the power of the prayers in the mahzor, he says that when it comes to reading in synagogue, you should do whatever works.

“The purpose of the davening is in part for people to go deep inside themselves,” he said. “If there are materials that people have that will help them do that, how wonderful.”