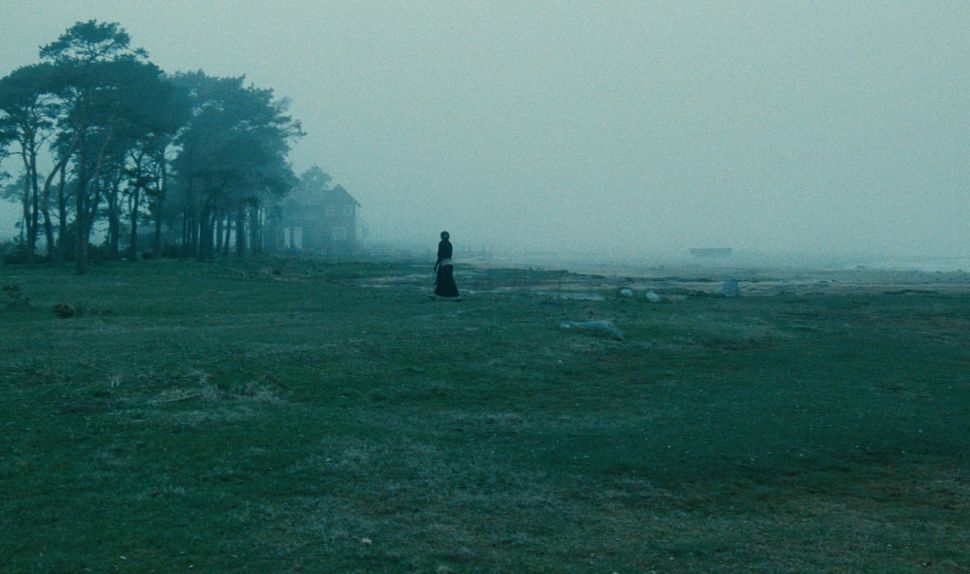 By the time that Soviet filmmaker Andrei Tarkovsky created his nuclear war parable, “The Sacrifice” (1986), currently playing at the Quad in a new 4K restoration, he had been exiled from one of the Cold War’s superpowers and had been thoroughly nonplussed by the other. Filmed in Sweden, in geographic and spiritual retreat from Moscow and Washington, the film takes an unusually mournful view of a civilization hurtling towards catastrophe. Tarkovsky would die later that year, at the age of 54 leaving “The Sacrifice” as his final work.

The film’s hero, Alexander, a journalist and critic who dotes upon his son, known only by the charming sobriquet Little Man, struggles poetically with doubt, saying “At least I know what Hamlet meant.” On his birthday, he gathers with friends and family, including his melodramatic wife and a disquietingly slick doctor, to celebrate in his uncannily austere high bourgeois house. Throughout, he carries on philosophical dialogues with an eccentric postman named Otto. The family’s chilly, talky gathering is interrupted by the announcement of imminent nuclear war, at which point things take a stranger turn. The family attempts to cope with the possibility of total destruction. Otto tells Alexander that the final hope of humanity rest in his sleeping with a Bjork-like local witch (actress Guðrún Gisladóttir would go on to play the Icelandic singer’s mother in the 1991 film “The Juniper Tree”).

“The Sacrifice” was filmed on the remote Baltic Island of Fårö , Sweden, best known as the home of Ingmar Bergman, whom Tarkovsky greatly respected (the admiration was mutual), and “The Sacrifice” bears a certain resemblance to the Swede’s work. In addition to the familiar cozy desolation of the Nordic landscape, the film features Bergman company actor Erland Josephson in the role of Alexander and was lensed by his legendary cinematographer Sven Nykvist. Thematically, the film also incorporates the lapsed Protestant existentialism of Bergman’s work. Looking at a book of Orthodox icon paintings, Alexander laments, “All this has been lost, we can’t even pray any longer.” A composition in which he lowers his head beneath a wooden cross momentarily looks like it could have emerged from Bergman’s 1960s trilogy of “Through a Glass Darkly,” “Winter Light,” and “The Silence.”

These elements have earned “The Sacrifice” a reputation as Tarkovsky’s Bergman film as well as the most theatrical entry in his filmography. The family’s high class verbal sparring has a certain Strindbergian element, and Alexander’s spare country home does somewhat resemble a stage. Stylistically, Tarkovsky employs his trademark long takes and camera movements are employed with relative restraint — sinuous, roving tracking shots give way to abstracted horizontal glides. Regardless, the film is no less relentlessly cinematic than any of his other works, relying on nifty, if more subtle, maneuvers involving focus pulls and mirrors that would be, of course, unthinkable without the camera. Tarkovsky and Nykvist radically desaturate the film stock in the film’s second half, leaving Alexander to while away his dark night of the soul in uneasy monochrome. The sound design, combining Japanese folk music and the sounds of fighter jets above, is as adventurous as anything in “The Mirror” (1975) or “Stalker” (1979).

Thematically as well as stylistically, “The Sacrifice” is an extension of Tarkovsky’s preoccupations rather than an appropriation of Bergman’s. He had a deep interest in ecological issues, the conflict between humanity and its environment, going back to his earlier films in the USSR. “Andrei Rublyov” (1966), a speculative biography of a medieval icon painter, gained much of its power from the contrast between the ingeniously rendered beauty of the Russian landscape and the abject cruelty and suffering of the people who inhabited it. In his later sci-fi films “Solaris” (1972) and “Stalker” (1979), humanity’s alienated technology mastery comes up against ecologies equipped with supernatural, even godlike powers.

“The Sacrifice” takes these concerns to an apocalyptic, even despairing place, ruminating on the possible inevitability of humanity’s destruction of both nature and itself. Accordingly, “The Sacrifice” is a forlorn movie. Alexander will get his opportunity to pray, vulnerably beseeching God on behalf of all humanity, particularly “All those, to whom no one except Thou, can offer protection.” The filmmaker’s talent for depicting the act of crying is put to good use throughout the film — both Alexander and his wife undergo protracted, highly physical bouts of sobbing.

Even beyond the tears, “The Sacrifice” is a rather wet film. Tarkovsky is celebrated for his facility with each of the elements – fire, wind, and earth have their moments throughout the film – but he had a special feel for water, finding some sort of atmospheric alchemy between indoor leaks, a spectral haze, the neighboring Baltic Sea, and well-lubricated eyes of numerous characters. Tarkovsky described his unique approach to temporality as “Sculpting in Time,” a phrase later used as the title of his book on filmmaking, but the experience of getting caught up in the inimitable rhythms of his films is somewhat aquatic. Like someone bathing in a river, one feels the current even when not consciously aware of it.

Tarkovsky’s preference for ineffable experience over intellectualization in cinema as well as his rather reactionary attitudes towards contemporary life have earned him a reputation as a sort of mystic. Certainly, there was a degree of anti-rationalism in both his personality and his work, and his tastes were almost comically conservative. He’s been posthumously subjected to a peculiar phenomenon: the more thoroughly his personal attitudes are trounced, the more he’s venerated by a culture he would almost certainly have abhorred. Yet “The Sacrifice” helps to clarify the terms of his attitudes towards modernity: He’s not an escapee from society, but a critic of it. As the film reappears into The Year of Our Lord 2017, a time of accelerated environmental despoliation and resurgent nuclear proliferation, Tarkovsky’s vision seems rather pressing. Alexander and the protagonist of “Stalker” may be transformed into Dostoevskian holy fools, but their creator was, for better or worse, a decidedly more modern creature.

In the film’s denouement, Tarkovsky forges a kind of synthesis between the various philosophical currents running through the film, finding some harmony between Western Christianity, the director’s personal strain of Orthodox-inflected animism, as well as a gesture towards Eastern spirituality represented by Ikebana, Japanese folk music, and as a kimono-like garment donned by our protagonist in the morning. The film’s climax, built around one of the most technically staggering long shots of the filmmaker’s career, leaves more questions than answers. How real were the events of the previous night? What, exactly, was the titular sacrifice? After the somber events of the night, there’s a note of dry bathos to the film’s resolution. And yet it works, not as a definitive final statement, but as a densely coiled koan about the possibility of retaining one’s sanity in a world gone mad.