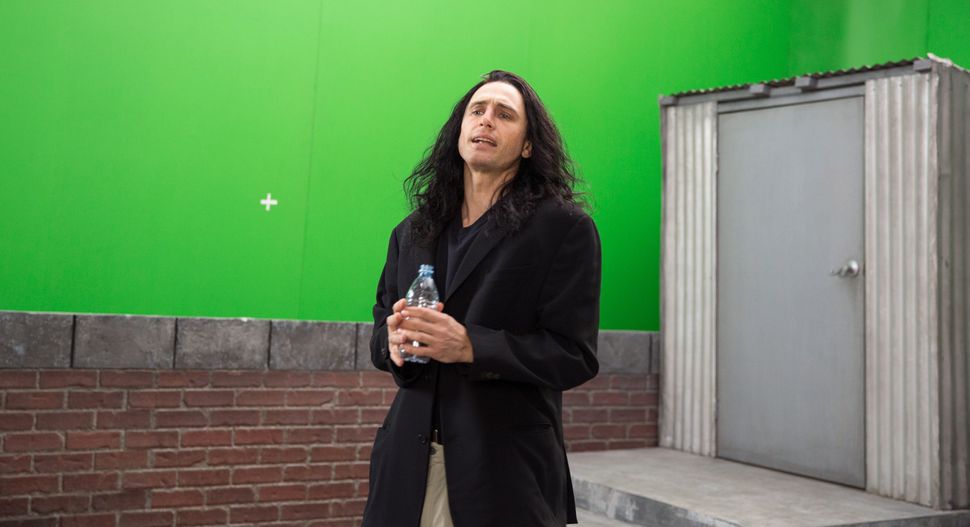 James Franco is ‘The Disaster Artist.’

Maybe the most salient characteristic of our culture is how much of it is bad. Technological changes have allowed an unprecedented number of hacks to produce great quantities of what the parlance of the day terms “content.” At the same time, the presumed existence of a consumer with a bottomless appetite for diversion has encouraged a flood of things to look at or click on. While these developments do have genuinely positive democratizing potential, the sheer preponderance of things that are terrible to read or watch is alarming. In dark moments, while watching, say, a cookie-cutter studio franchise film or tuning into a slick TV news program, one gets the sense that their ugliness and stupidity are not accidental but somehow by design. But the mood passes, one goes back out into the world, and the proliferation of awful things goes on as before.

At a different time, Wiseau’s little movie would have faded into obscurity. “The Room,” however, found a receptive audience at a time when YouTube made it possible for strange televisual artifacts to go viral and an influential generation of Jewish comedians had begun to take inspiration from the inexhaustible detritus of 21st century media. The most important progenitors of this style were Philly-raised, LA-based comedians Tim Heidecker and Eric Wareheim, known as Tim and Eric. They featured Wiseau in 2009 on their Adult Swim parody of cable television, “Tim and Eric Awesome Show Great Job!”

“Awesome Show” borrowed from lethargic public access TV and hyperactive commericals alike, resembling densely overstimulated video art more than a conventional comedy or sketch show. The show’s worldview was rooted in absurdism, but it contained a sharp satirical streak. Heidecker described the ethos to Marc Maron, saying, “You have to all be on the same page that we’re all f—ked and most things are garbage.”

Los Angeles is the spiritual and economic home of both this style of comedy and the broader culture it assails, attracting an endless parade of aspiring entertainers desperate enough to be put to worthy or disreputable causes. Tim and Eric have exploited Hollywood’s underbelly, bestowing a sort of microcelebrity on LA denizens like paranoid puppeteer and musician David Liebe Hart and fey lounge act James Quall, men who exert a genuine magnetism despite lacking anything that could be described as “talent.” Wiseau fits seamlessly into this category. In “The Disaster Artist,” Franco ably captures both his surface mannerisms, particularly the odd disconnection between his tone of voice and the content of what he says and the deeper pathologies, the alpha arrogance and defensive vulnerability, that make “The Room” what it is.

Self-aware regarding his own lack of self-awareness, Franco is, if anything, all too qualified to take on the role of Wiseau. Though the average viewer might not know it, “The Disaster Artist” is Franco’s 18th directorial effort, following a number of politely ignored films that flaunted the actor’s literary aspirations, including multiple adaptations of Faulkner novels and biopics of Hart Crane and Charles Bukowski.

Though already firmly ensconced in the celebrity bubble Wiseau hungered to enter, Franco knows what it’s like to risk ridicule attempting to enter a world that may not want you. And ironically, his most notable performances have come when he’s cast aside his MFA bro ambitions and embraced the seedier sides of American culture –— first as a version of Houston rapper Riff Raff in Harmony Korine’s “Spring Breakers” and now as Wiseau. He may never become that world-class literary talent or auteur, but he’s a more than able impersonator.

Throughout the movie, Franco’s Wiseau is compared to various monsters by gatekeepers and acquaintances alike; and indeed there is something more than vaguely vampiric about his refusal to divulge anything about his origins, to say nothing of his sub-Hot Topic fashion sense. The secrecy is authentic to the real Wiseau who has also refused to disclose his nationality or age. In “The Room,” his character is meant to be the same age as his co-stars, a plot point that remains unconvincing despite his obsessively ripped physique. He does indeed appear to have the body of a younger man, albeit one who is deceased.

“The Disaster Artist” builds some pathos for its antihero as he’s rejected by the Hollywood industry, dressed down by none other than Judd Apatow. Soon though, it turns out that Wiseau somehow has access to the resource that will allow him to hack the system: money. Shortly thereafter, Wiseau is overseeing a crew of genuine professionals and actors as the director of what he ominously refers to as a “real Hollywood movie.”

The depiction of the production process accounts for the film’s funniest and most substantive moments. Much as “The Room” itself is a sort of uncomprehending imitation of a film, its production holds up a sort of funhouse mirror to the act of filmmaking. Franco’s Wiseau quickly becomes a tyrant on set, infuriating the production’s seen-it-all crew members (Paul Scheer and Seth Rogen, who also produced). While terrorizing his co-star before filming his movie’s infamous love scene, he justifies his actions by citing the well-known examples of Stanley Kubrick and Alfred Hitchcock’s on-set abuses.

What’s remarkable is how, despite the patent ridiculousness of both Wiseau and his project, the general architecture of the system retains its integrity, maintaining the organization of a Real Hollywood Movie. And for a reputed price tag of over $6 million, who’s to say it isn’t one? Particularly now that Wiseau, who now tours the country with his unexpected “cult classic,” has in all likelihood made back his investment. The answer to the question “How did this get made” turns out to be potently banal: He paid for it.

The real pleasure in “The Disaster Artist” resides in the way that it blurs the lines between the genuine Hollywood product and the trashier amateur work that takes place in its backyard. Much as something like “The Room” can only be made with the actual time and work of a team of filmmakers, even the coldest, most financially engineered Hollywood movie requires at least a touch of the fevered delusion that convinces the Tommy Wiseaus of the world that they have something to say — a whisper from the same voice that tells James Franco that he might be cinema’s Faulkner.

“The Disaster Artist” shows the influence of “The Room” coming full circle. Since the Bush-era release of “The Room,” the kids and comics who latched onto its uncanny vision now control much of the culture. Indeed, so much has changed that one wonders how much longer the comic sensibility that fostered “The Room” can continue to exist. There used to be a sort of hipster archeology to seeking out trash like “The Room,” a search that required time, energy, sensitivity and humor.

Today, however, “Tim and Eric”-level strangeness is beamed into every American home as grim required viewing. Sean Spicer and Dr. Sebastian Gorka would make good Tim and Eric bit players. Anyone looking for the story of a deluded, misogynistic vulgarian who makes a prolonged spectacle out of his own awfulness and is rewarded beyond anyone’s wildest expectations for doing so need not refer to “The Room” or “The Disaster Artist.” The phenomenon is no longer niche. We all live in the The Room now.