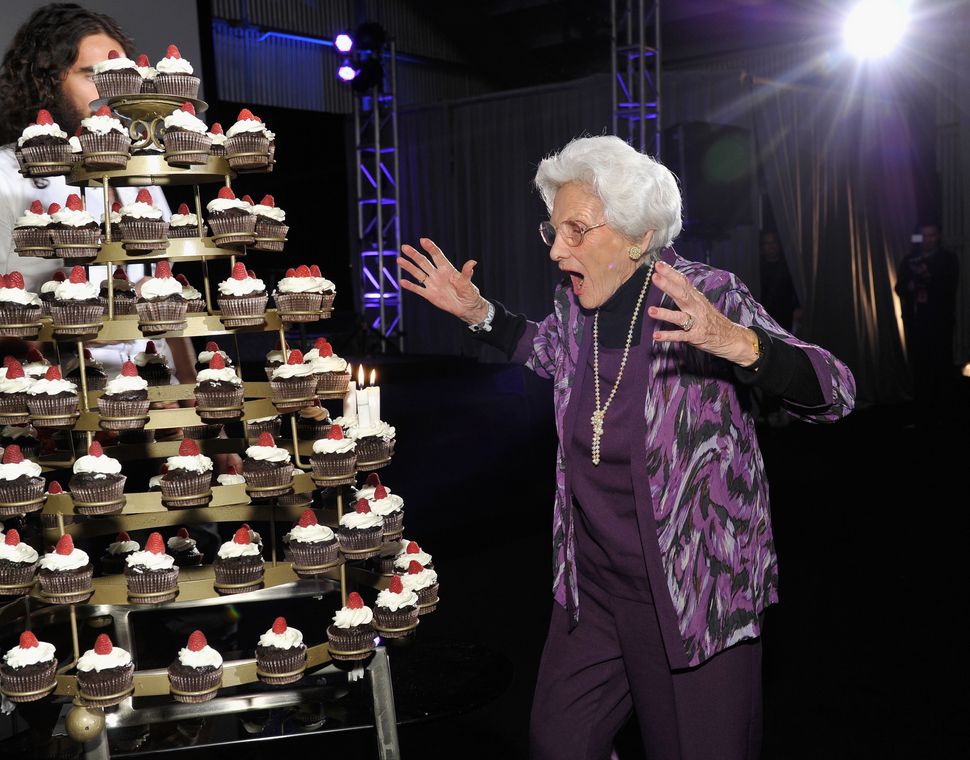 Old Jewish character actors never die, they just stop going on casting calls. Charles Lane (born Charles Levison; 1905–2007) a mainstay in small roles in Frank Capra films and on the TV series “I Love Lucy,” kvetched during his hundredth birthday celebration that his performing career had recently slowed down. Connie Sawyer, who died on January 22 of this year at the age of 105, had no such problems. Born Rosie Cohen in Pueblo, Colorado in 1912 to an Orthodox Jewish family of Romanian origin, she appeared in the Jim Carrey movie “Dumb and Dumber Too” released in 2014. Some film buffs claimed this qualified her to be the oldest working actress. An experienced sketch comedienne in nightclubs, she had appeared on TV in the 1940s on “The Milton Berle Show,” and on Broadway as Mrs. Fessler, a wildly drunken character in Arnold Schulman’s comedy “A Hole in the Head.” Sawyer was hired to recreate the exuberant role in the 1959 Hollywood film version starring Edward G. Robinson and Frank Sinatra.

After that, it was fairly constant employment in little vignettes such as the “Talkative Woman at Hanging” in the 1969 John Wayne vehicle “True Grit.” There were some serious outings, such as “The Man in the Glass Booth” (1975) starring Maximilian Schell, about a Jewish industrialist accused of Nazi war crimes, likely inspired by the kidnapping and trial of Adolf Eichmann. More in her usual style, in the comedy series “Archie Bunker’s Place” Sawyer played the mother of Martin Balsam (1919-1996), the Bronx-born Jewish actor who was only seven years younger than she. Sawyer also appeared in the original “Dumb and Dumber” (1994) as a larcenous old lady riding a mechanized wheelchair. Among her more disarming roles was as one of the elderly wives in the short scenes interspersed throughout Rob Reiner’s “When Harry Met Sally,” where actors portray veteran couples recounting how they met with such verisimilitude that some filmgoers thought that the scenes were documentaries, rather than comedic fiction.

This kind of performing veracity was hard-won. As Sawyer told interviewer Kliph Nesteroff:

As a girl, she won a radio amateur hour contest and honed an impersonation of her comic idol, the much-loved vaudevillian Fanny Brice. At eighteen, she opened in the Catskills, where her act bombed, and she ran offstage, telling the audience, “Why are you so mean to me? I’m Jewish!” Mentored by the Bea Benaderet (1906 –1968), a comic actress of Turkish Jewish origin who would turn up on the “George Burns and Gracie Allen Show” as well as the original voice of Betty Rubble in “The Flintstones,” Sawyer played in live shows, radio, and early television alongside such popular acts as Sophie Tucker, Morey Amsterdam (born Moritz Amsterdam in Chicago to Hungarian Jewish parents), and Jack Carter (born Jack Chakrin in Brooklyn in 1923). The comedy could be rough; on one episode of the Eddie Cantor show, she and Cantor played two visually impaired people who meet on a blind date. Ha ha ha. Sawyer acquired more appealing material from comedy writers, including a sketch, “You Too Can Be Beautiful,” in which she flounced around as an uppity Saks Fifth Avenue model. Performing in legendary nightspots such as New York’s Café Society, where other up-and-comers included Phil Leeds and Lee Grant (born Lyova Haskell Rosenthal), Sawyer diligently trained with the acting teacher Uta Hagen and with the help of director Daniel Mann (born Daniel Chugerman), was admitted to the Actor’s Studio.

This underlying seriousness and professionalism formed the basis of her startlingly prolonged career. Placing home and family first provided personal rewards when her personal fame did not reach the starry heights of other colleagues. There has never been anything dumb or dumber about Connie Sawyer, a dedicated jobbing actress who had her priorities straight from her start in the 1920s.