What Do The Paintings ‘Jacob And His Twelve Sons,’ Once A Political Weapon In England, Mean Today? 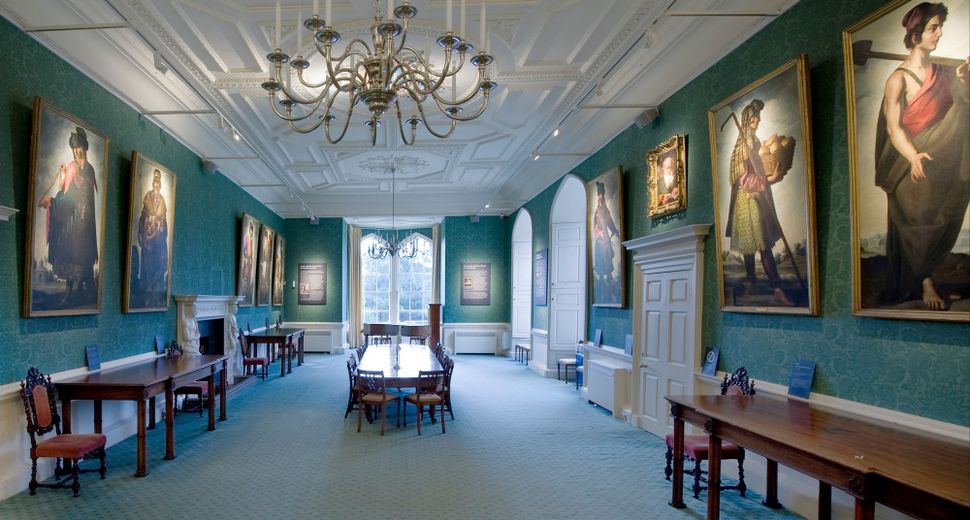 Image by Colin Davison/Courtesy of the Auckland Project

If you’d like to see the face of the biblical patriarch Jacob, or that of any one of his twelve sons, you must take a big step back to do so. The individual portraits arranged around one long, large room at the Frick Collection demand it. Nearly seven feet tall and hung roughly a yard above the floor, they insist on deference from those who would like to see them in full. 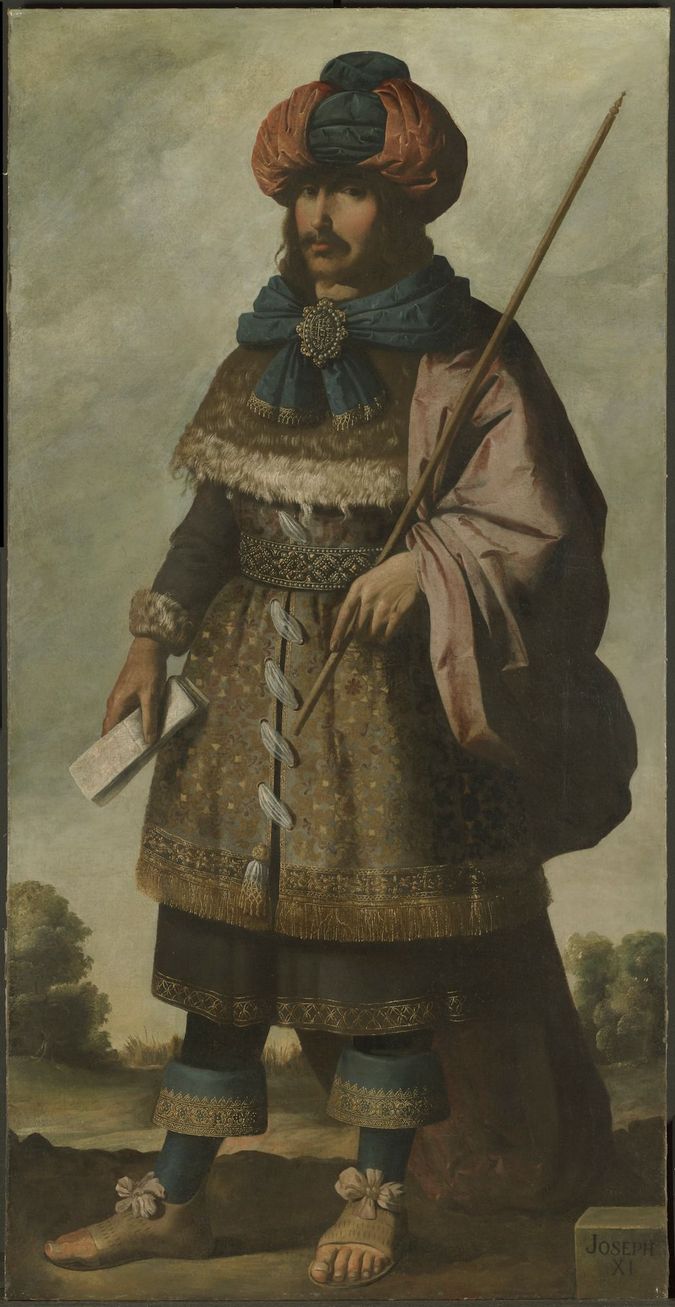 The paintings give almost kingly attention to subjects who were, in Europe, quite unfashionable. Yet remarkably, all but one of the portraits eventually found a home in England’s Auckland Castle, the traditional seat of the dauntingly titled Prince Bishop of Durham, then Richard Trevor. Trevor purchased the 12 paintings he could afford — Benjamin, most precious son of Jacob, was slightly too precious for Trevor — in 1756. Three years earlier England’s parliament had passed the progressive Jewish Naturalization Bill, which would have allowed Jews to become naturalized citizens of the country. Trevor had ardently supported the act, yet one year later, in the wake of anti-Semitic retaliation, it was reversed. Trevor, in response, hung the Zurbarán series in his dining room, where Jacob and most of his sons might stare down at his fashionable, powerful guests and provoke shame.

In some ways, that action feels very 2018: An often stymied fight for immigrant rights, a melding of art and activism, a resurgence of anti-Semitism, a flashy show of resistance within the ranks of the elite.

The Jewish people are fairly popular in New York; good luck finding a decent bagel without us. Yet the crowd at the Frick recalled the dining room of Auckland Castle for the mere fact that Jewish subjects remain a rarity in the accepted canon of European art history, the Frick’s primary purview. The sight of a swanky crowd craning their necks to catch a glimpse was therefore unusual, if not to the same pointed political effect as was intended for Trevor’s dinner guests.

There is something unmistakably political about the exhibit, beyond the activist history attached to most of the paintings. (Trevor commissioned an exact copy of Zurbarán’s “Benjamin,” but the original portrait, owned by Lady Willoughby de Eresby, has been loaned to the Frick to complete the set.) Scanning the Frick’s collection, it turns out that Zurbarán’s “Jacob and His Twelve Sons” are more typical in content than they appear. There are Jewish subjects scattered throughout the museum’s collection: Two statues of King David, a cup relating a story about Moses, Rembrandt’s drawing “Isaac Blessing Jacob” and Claude Lorrain’s drawing “Jacob, Rachel and Leah at the Well.” (That’s a welcome inclusion; one is regrettably likely to forget, viewing the Zurbarán portraits, that Jacob’s family included women.) 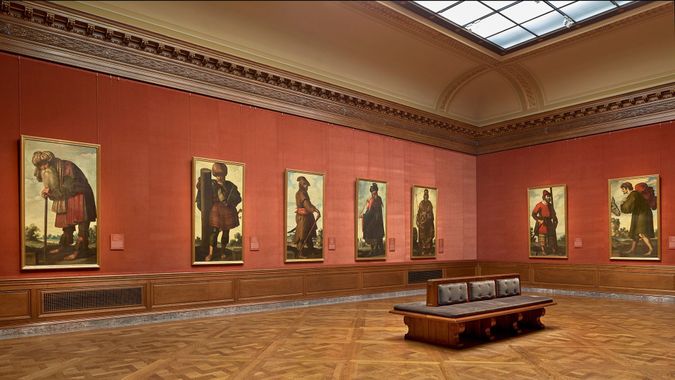 Zurbarán’s “Jacob and His Twelve Sons,” on view at the Frick. Image by Michael Bodycomb

What these items share is that the Jewish figures they depict have profound meaning not only for Jews, but also for Christians. Jacob and his sons, as the text accompanying the Frick exhibit makes clear, are often seen as progenitors of Jesus and his apostles. In the early years of Christianity, the life of King David was seen as a premature allegory for the life of Christ. Moses, like Jacob and David, is seen as a prefiguration of Christ — a connection drawn, in the New Testament Gospel of John, by Christ himself.

Given the inherent mixing of stories and ideas that takes place between religions, it appears close to inevitable that the Frick’s Torah-inspired art would acquire mixed meaning. Yet viewed through the historical lens adopted by the exhibit, which focuses on Trevor’s use of “Jacob and His Twelve Sons” to tacitly advocate for England’s traditional outsiders to be allowed citizenship, that fact invites a depressing conclusion: The outsiders worth advocating for are those who have something definitive and obvious to contribute to the culture they wish to enter.

That’s an idea currently subject to charged debate in the United States. According to The Washington Post, in the 2017 fiscal year the number of non-criminal arrests made by Immigration and Customs Enforcement officers was more than double that of 2016. In that context, there’s something troubling in the idea that continued welcome should be specifically issued for immigrants who demonstrate exceptional public worth. As Masha Gessen wrote in a September op-ed for The New York Times: “It’s not immigrants’ economic contribution that makes America proud; it’s its adherence to the words inscribed inside the base of the Statue of Liberty: ‘Give me your tired, your poor/your huddled masses yearning to breathe free.’”

The Zurbarán portraits are beautiful. Seeing them displayed at the Frick is a thrill. Yet while their exhibition history stands for a certain degree of religious open-mindedness and cultural acceptance, it doesn’t take that message nearly as far as the exhibit suggests. Auckland Castle, now owned by the British philanthropist Jonathan Ruffer, who intends to transform it into a cultural center, is a prominent partner of the Frick’s in presenting the exhibit. It would be worth both parties’ time to devote some thought, past the particular history of “Jacob and His Twelve Sons,” to the history of the past few centuries outside Auckland’s walls. In our contemporary world, displacement happens at a record scale. The gestures of the past may not hold as much value in the present.

Yet the focus of the exhibit is, ultimately, Zurbarán’s paintings; it’s worth the risk of a sore neck to see them. Each of the paintings’ subjects has a character all his own. The flaws of those who were deeply flawed are approached with honesty; those of Jacob’s sons who best lived up to his hopes have bearings that suggest they are aware that they carry the future. It’s deeply moving to see a portrait of so monumental a Jewish family — or at least, the men of that family — presented with complex personality, and without apology or justification.

You feel pride. And then you want more.

What Do The Paintings ‘Jacob And His Twelve Sons,’ Once A Political Weapon In England, Mean Today?