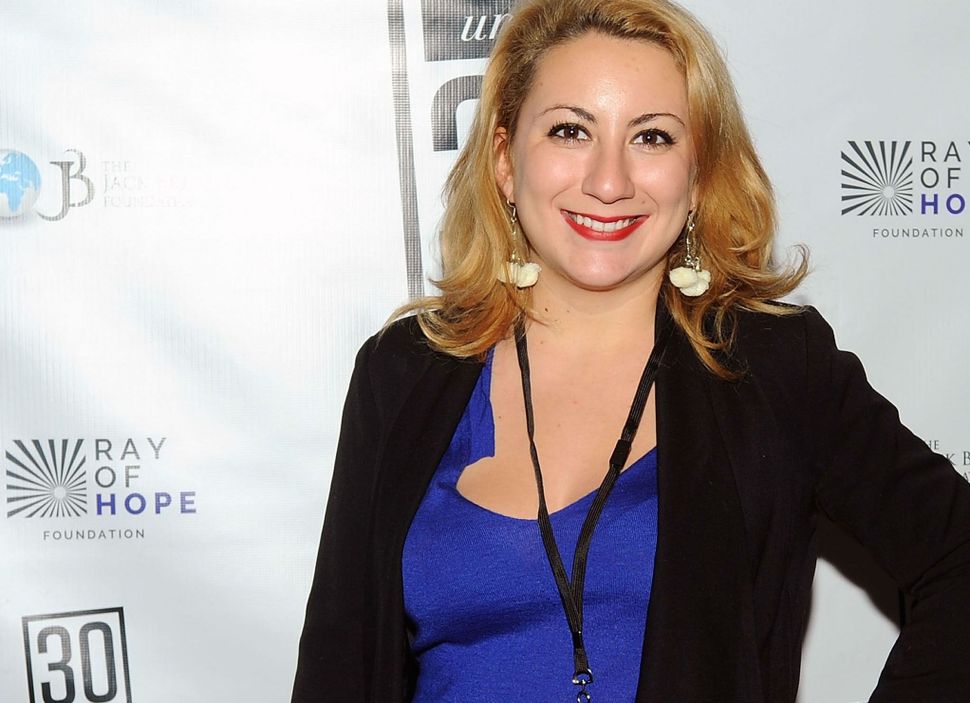 Serena Dykman grew up hearing stories of the Holocaust: Her grandparents were survivors, and her maternal grandmother, ​Maryla Michalowski-Dyamant, was a renowned Holocaust educator, who spoke about her experiences around the world. Years after Maryla’s death, when Serena witnessed the aftermath of anti-Semitic terror attacks in Brussels and Paris, she decided it was time to make a film about her grandmother.

The brilliant result of that effort, the documentary “Nana,” combines archival footage of Maryla with modern scenes of Serena and her mother, including footage of a harrowing visit they make together to Auschwitz. The film is currently screening in New York at Cinema Village.

Serena spoke to the Forward about her efforts to ensure Maryla’s legacy, and the question of who is responsible for keeping the memory of the Holocaust alive.

Can you tell me about your grandmother’s work in Holocaust education?

Yes. She really started to speak publicly in the ‘70s when Holocaust deniers started to really rise. And then she made it her life mission. She spoke in schools all the time. She went back to Auschwitz about ten times a year, for decades. She realized at some point that she and other survivors were the last living witnesses of what had happened, and she said [after the war] she knew that anti-Semitism would never end and that hate would never end. But, she’d always say ‘one thing that I never thought would happen is that people would deny that it happened’ 25 years after. And then I think she realized the positive impact that Holocaust education can have. My grandfather who she met three days after the war was Catholic. And she had really a much broader message which was a message of tolerance, of self-love, of respecting one another. She was very curious about other religions.

She was able to stay open-minded even after experiencing that trauma.

I think even more so because she realized where hatred and intolerance can really lead. She would say, ‘it happened to the Jews and I speak as a Jew because I suffered as a Jew but maybe tomorrow it will be people with blue eyes’ — she saw the absurdity of it all. And I think as smart and educated as she was she never lost her innocence and her childhood … I think that’s why so many people are able to relate to her. She’s not a professor who uses fancy words, she’s someone who’s real, who tells you things as they are, who’s not a victim. She’s pretty kick-ass.

What was the moment when you knew you wanted to make a film?

Nana wrote a memoir, which I knew I had to read at some point in my life. It was published in 2000. And I was at the book signing. So it’s something I was very aware of. Then — I grew up between Brussels and Paris — I was in Brussels during the terrorist attacks at the Jewish Museum and that shocked me. Being there in my hometown — and, by the way, my other grandmother, who’s still alive and who’s also survivor lives nearby. It was just very shocking. I was also in Paris on the day of Charlie Hebdo and the [terrorist attack at] Hyper Kosher. Witnessing those two events and having the book with me — I just like, OK, now it’s time to read it.

I read it and I was very angry because obviously I had so many questions she could not answer. And in the aftermath of those attacks I saw how fingers were being pointed in every direction, I was like, “well, I’m a filmmaker and I’m the granddaughter of this amazing woman who can’t do this work anymore … I’ve got to do something about it.”

Was your grandmother comfortable talking about her experiences?

I think she was more comfortable than most. And unlike a lot of Polish survivors my grandmother stayed very attached to Polish culture. My grandfather was Catholic Polish. They spoke Polish, cooked Polish food. Obviously it was very painful for her but she never rejected Poland.

It is very complicated. The town she grew up in was quite small. It was 60,000 people and it was half-Jewish and half non-Jewish. And she went to a Catholic school because she was a girl so she couldn’t go to Jewish school during the week. She went over to her friends for Christmas and they came over for Shabbat, and it was basically the way I live in New York City in 2018. Except it was literally a hundred years ago. And I think for her she wasn’t really a victim of anti-Semitism before the war started. Unlike a lot of people that were in Warsaw, where there were already pogroms, she had a happy normal childhood. I think she held on to that.

But I think the reason why she talked about it so much was, one, so it would never be forgotten — because she said that she spoke in the name of all the ones that didn’t survive. It wasn’t about showing off her story or talking about herself as an individual. She represented the six million that didn’t get to speak after. And at the same time she knew the positive impact that Holocaust education or genocide education can have to prevent anti-Semitism and intolerance. So I think that’s why she did it so tirelessly even though it was so painful — thousands of thousands of times.

Can you talk a little bit more about her other experience in the camps?

She was in the Bedzin Ghetto. Bedzin was about 40 kilometres away from Auschwitz, so unlike a lot of people in Europe she actually knew what was going on. So I think people in the area had a very different relationship to the situation. She got deported in ‘43 which is quite late and then she was in Auschwitz for a year and a half. If I’m not mistaken she was Dr. Mengele’s translator for about six months. Then she was in Ravensbruck and then Malchow.

What else do you remember about her?

Nana was someone with an incredible sense of humor. So people really laugh during the film because there are a lot of funny moments. And she also had such joy and love for life. And I think that’s what helped her survive. And it’s contagious. I get messages like, ‘your grandmother made me want to live better, to live life to the fullest.’

What responsibility do you think third generation has in terms of telling these stories?

It’s hard to say. To me the answer is, we have a huge responsibility but at the same time I don’t think that any member of third generation necessarily has to do something. I think it’s totally OK that some people just don’t want to deal with this — it’s their own choice, like survivors. But also we live in a very critical moment in time where there are barely any survivors. And in a few years there will be even fewer. And we’re living through hard times politically and socially everywhere. If we don’t act we’re going to have a problem. But it’s not just on the third generations to do something … the responsibility is on everyone.

I think we need to stop making this a Jewish issue. Let it go. It’s something that belongs to humanity. Obviously for Jews it’s a lot more personal and there’s trauma involved. But I think that’s one of my main points in the film: To help people understand why it’s important to learn about the Holocaust and why it belongs to all of us.