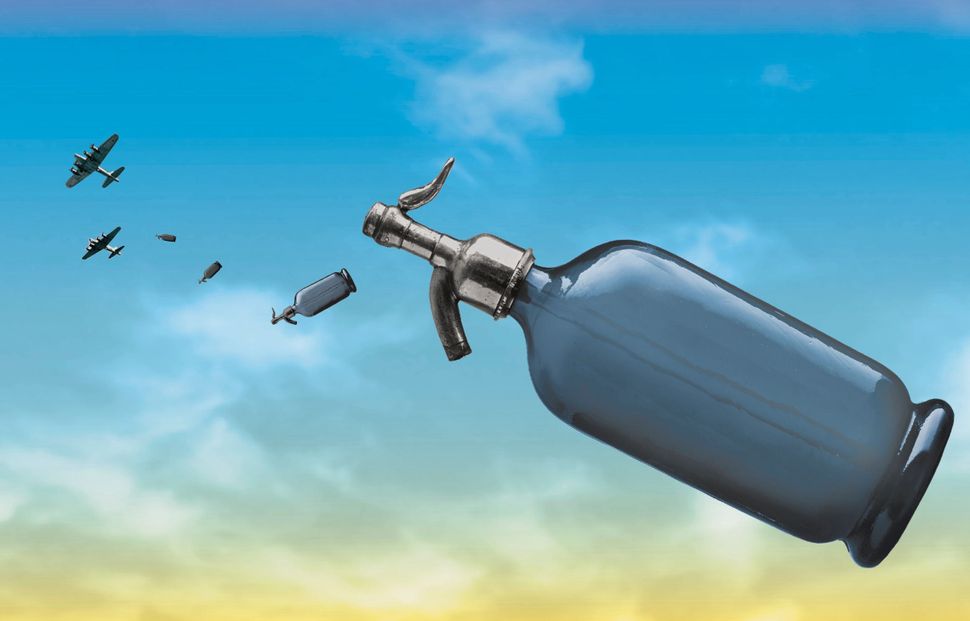 When I watched the movie “Cast a Giant Shadow,” it was hard to know if I was supposed to laugh or cry.

It was like “Schindler’s List” with a laugh track, a Borscht Belt “Exodus.” Here was Frank Sinatra, pretending to fly an Israeli Piper Cub, fighting off an invading Arab army, with seltzer siphons. This was the source of the meshuggener notion, commonly held among Jews of a certain age, that seltzer played a role in the creation of the new Jewish state. But was this true or just Hollywood mythmaking?

“Cast a Giant Shadow” was written and directed by Mel Shavelson, whose rise to fame began in the 1940s when he wrote such Bob Hope movies as “The Princess and the Pirate” and “Sorrowful Jones.” In the 1960s he decided to try his hand at directing. Casting around he found a dramatic subject that caught his interest: the story of David “Mickey” Marcus.

After World War II, Marcus, an American, went to Israel to help unite and train the various factions of the country’s fledgling military. Marcus is played by Kirk Douglas, and the movie traces not only Marcus’s struggles to modernize the army but also his made-for-Hollywood journey to claim his identity as a Jew. By the end, with seltzer as a talisman, he completes his transformation.

Seltzer first enters the film during a drive through the Negev. Israeli jeeps are heading into battle. Douglas learns there are only three planes in the Israeli Air Force, one being flown by his friend Vince, played by Sinatra. Douglas tells the commander: “Tell them to drop anything they can find. Anything that makes a noise.” 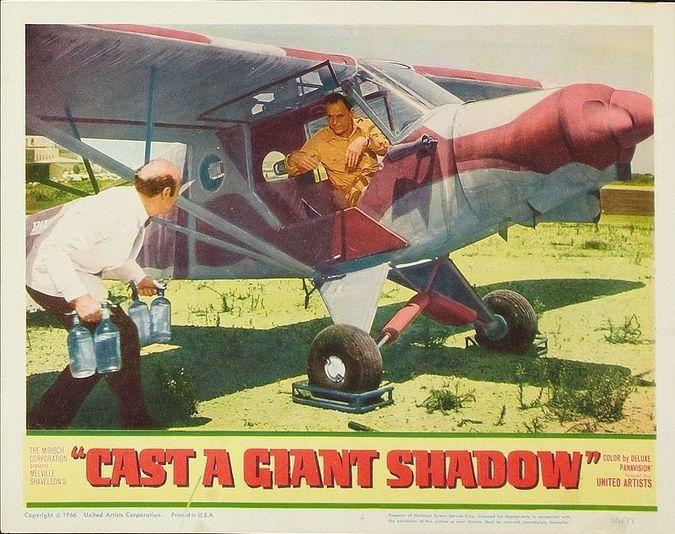 Cast a Giant Siphon: Frank Sinatra prepares to get his shipment of seltzer bottles in ‘Cast a Giant Shadow.’ Image by United Artists

Douglas laughs and says: “Vince once told me of a run he made over New Guinea with half-empty pop bottles. They burst on impact. Make a hell of an explosion.” When the commander gives him a funny look, Douglas says, “Now don’t tell me they don’t have seltzer in Tel Aviv.”

Before the battle is about to commence, the inexperienced commander turns to Douglas. “I’ve never faced tanks before,” he admits sheepishly. “Neither have my men.”

“That’s all right,” Douglas reassures him. “The Egyptians have never faced seltzer.”

As a Piper Cub warms up on an air strip in Tel Aviv, a catering truck pulls up. Two waiters climb out and haul a case of seltzer siphons to Sinatra.

As Douglas and crew attack the tanks, the Piper Cub appears overhead and dives for the lead tank. We hear the shriek of a falling object. A seltzer bottle hits the tank and burst with a tremendous explosion. Then, Sinatra hurls another seltzer bottle from the window of his plane.

“Bombs away!” he shouts.

I knew this film wasn’t a documentary, but I couldn’t believe, after having it described to me so many times, by so many people, in so many different ways, that I was actually seeing it with my own eyes: seltzer bottles being used as bombs in the Israeli War of Independence, in a film made less than two decades after the real war it depicted. Seeing Sinatra, who later squirts a seltzer bottle at an enemy jet fighter only made the entire experience that much more surreal.

Ultimately, Sinatra finds that he can not be saved by his seltzer bombs, but we soon learn that, on a deeper, more spiritual level, Douglas’s character can, in fact, be saved. He says that he never understood why the Israelis gave such importance to Jerusalem. Why waste so many lives for something of such little strategic value? But after arguing with Yul Brynner who, playing Moshe Dayan, expresses doubts they can ever break through, Douglas counters this defeatist attitude. “We made it through the Red Sea, didn’t we?” he asks.

Brynner, taken aback, points out that for the first time Marcus has used the term “we.” He is identifying with the Jews. Douglas thinks a moment before an impassioned look come over his face. “You people. A pipsqueak nation. Tin can army that fights with seltzer bottles,” he says. “We! All my life I’ve been looking for where I belong. Turns out it’s here: the Catskill Mountains, with Arabs.”

It is here that seltzer has been transformed from being part of a humorous incident earlier in the film into a symbol of something greater. It represents the film’s admiration for how Israel faced its lack of resources against an invading army. More important, it represents how Israel ingeniously, and with great bravery, employed these limited resources. When Douglas calls Israel a “tin can army that fights with seltzer bottles,” his character is claiming fellowship with the essential Jewish character of its people, summoned up in the image of a seltzer bottle tossed from a plane. 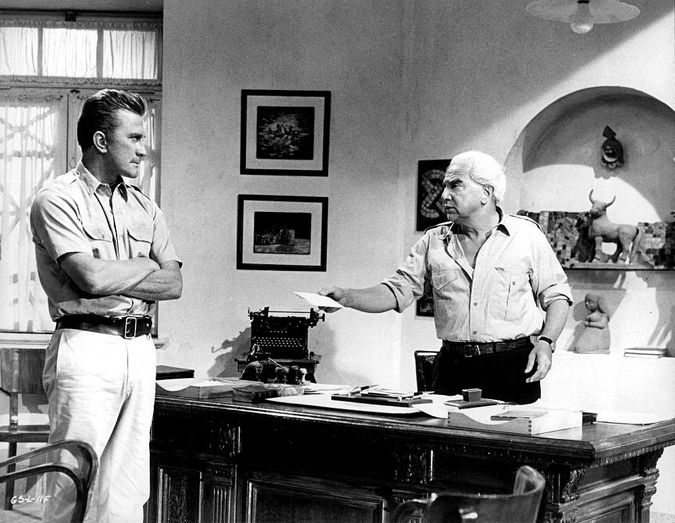 Inspiring! Fascinating! But was any of it true? My heart wanted it to be, but with Sinatra and Douglas delivering these humorous lines it was hard to believe.

In researching the film, I learned, to my surprise, that Shavelson not only came to regret making the movie, considering it a total disaster, but also wrote a book about it in 1971, called, “How To Make a Jewish Movie.”

But where did this idea for tossing seltzer bottles come from? It could not be true, could it? I had no idea if Shavelson was still alive or if, approaching 90 years of age, he could recall an incident over four decades earlier.

I contacted the Writers Guild of America, and before long I was dialing Shavelson’s home phone number.

“Hello,” a friendly voice answered. It was Shavelson himself. (I was lucky to reach out when I did, as he would pass away a few years later.) When I told him I had called to talk about the role played by a seltzer siphon in his movie, he just laughed, then proceeded to tell me everything I wanted to know.

I asked him how seltzer had ended up in the film in the first place. “Oh, very simple,” he told me. “I did a lot of research, obviously, about the Israeli War of Independence. I had a technical adviser, Col. Gershon Rivlin.”

In Shavelson’s book, Rivlin is described as a “friendly, soft-spoken, lovable man [who] spent 20 years fighting the British Occupying Forces as one of the leading members of the Underground, and then fought through the War of Independence.” In addition, there was one other item on Rivlin’s résumé that made him so valuable as an adviser to the film: “[Rivlin was] the official historian of the Israeli army,” Shavelson said, “which means that he gets into more arguments than anyone else in Israel — no mean achievement.” 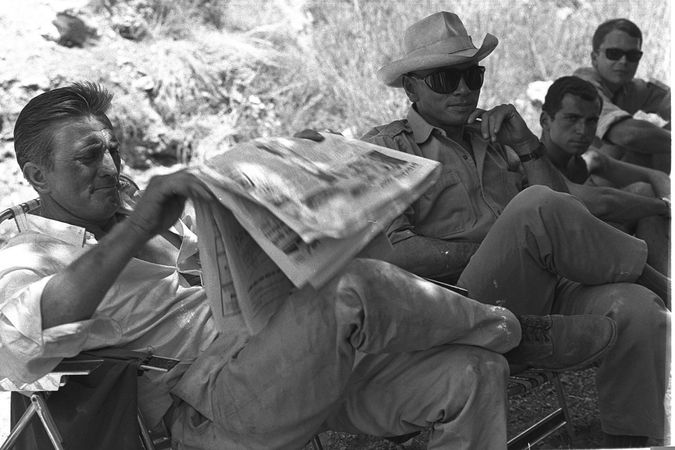 After The Seltzer: Kirk Douglas and Yul Brynner relax on the set of ‘Cast a Giant Shadow.’ Image by gettyimages

“Rivlin gave me many stories,” Shavelson said. “And one of the stories is the fact that since the beginning of the war, they didn’t really have any aerial bombs of any sort.” But they did have a minor air force.

“And,” Shavelson continued. “they did use seltzer bottles at one point because the Arab armies had never seen seltzer before, so it was used as an attack weapon. Now, how effective it was or how much it was used, I don’t know. But obviously, as you can see in the picture, it hits the ground and it explodes. That’s all they needed.”

Well, that seemed fairly conclusive. According to the official historian of the Israeli army, seltzer bottles were used as bombs, in at least one battle, in its War of Independence. At least these are the facts if you can believe a Hollywood director, the same one who made Sinatra squirt a seltzer bottle at an enemy fighter.

I had one final question for Shavelson: “How do you feel as the man responsible for educating an entire generation about this unique aspect of Israel’s, and seltzer’s, history?”

Without missing a beat, he replied, “You’ve had a little too much seltzer.”

*Barry Joseph is the author of “Seltzertopia: The Extraordinary Story of an Ordinary Drink.”