In Praise Of Ruth Rubin, Patron Saint Of Yiddish Song 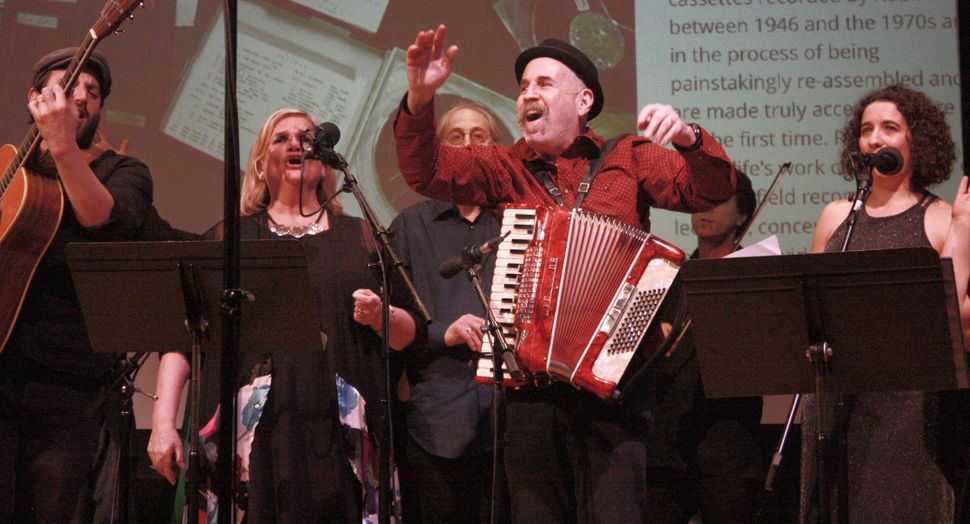 Ruth Rubin was the Alan Lomax of Yiddish folk song. For over 40 years, she visited Jewish communities around the world, tape recorder in hand, assembling a collection of more than 2,000 songs, including lullabies, children’s songs, love songs, drinking songs, satirical songs, and work songs, gathered from ordinary (and some extraordinary) “informants.” Hers was a Herculean effort, done entirely at her own expense out of a fervent desire to save a culture threatened by assimilation.

A portrait of Rubin emerged over the course of the evening of a vibrant, playful, joyous field researcher who loved nothing more than discovering new songs or variations of old songs that opened windows into the Jewish life cycle of the Old World and sharing her findings with others. The talent on hand and the remarkable songs that were offered served loudly and clearly as testaments to Rubin’s impact on Yiddish music as we think of it and experience it to this day.

For Rubin, it was always about the songs, and on this night featuring multiple marquee performers, world-renowned artists humbly set aside their own particular musical agendas in the service of those songs. Michael Alpert, a towering figure of the klezmer revival and renaissance as cofounder of Kapelye and Brave Old World, channeled the sound of a 19th century folksinger in “Papir Iz Zikh Vays (As Paper Is White),” employing the unique vocal ornaments of the Ashkenazi cantor – the bent, achy, twisted notes that simultaneously express joy and sorrow in a manner that bypasses the brain and goes directly to a listener’s heart.

Accompanied by violinist Jake Shulman-Ment, Daniel Kahn offered “Fun Groys Dasad Leyg Ikh Zikh Shlofn (In Great Sorrow I Lay Me Down),” a number Rubin discovered in 1955 in Montreal, perhaps accounting for the vague hint of Leonard Cohen in the melody and overall vibe. Sarah Mina Gordon was joined by a chorus of female singers for a boisterous “Ikh Hob Nisht Keyn Shande (I’m Not Ashamed),” a comic song about a family of thieves first sung to Rubin in New York in 1955.

One moment towards the end of the concert —— cosponsored by Yiddish New York and the Center for Traditional Music and Dance — stood out as the very picture of Yiddish revival and cultural transmission. Eleonore Biezunski was accompanied on “Meydelekh Un Vaybelekh (Girls and Wives)” by a trio of violinists representing three generations: Michael Alpert, Deborah Strauss, and Jake Shulman-Ment. That in itself spoke volumes about the successful rescue mission waged by Rubin and her ilk.

Speaking of Michael Alpert, the trailblazing Yiddish revivalist and renaissance man headlined his own program immediately following the Ruth Rubin tribute. His “Crossing the Border” concert showcased Alpert’s original work in Yiddish as well as paying tribute to a diverse cross-section of his influences. Alpert read Lewis Carroll’s “Jabberwocky” in Yiddish translation; he sang a capella love songs from Western Ukraine; and offered an original Yiddish song about the delights of herring. A few of his original compositions, including his autobiographical English-language tune, “My Father Was a Simple Man,” betrayed the influence of Sixties folk artists including Paul Simon (with Art Garfunkel when Daniel Kahn provided vocal harmonies), Tom Paxton, and the like. The program took its title from the Si Kahn (no relation) song of the same name, about Kahn’s immigrant father, a lovely counterpart to Alpert’s own tune about his dad. Alpert also offered a few fiddle tunes in an instrumental jam with ace tsimblist Pete Rushefsky. It was great to have Alpert, who left New York City for Scotland a number of years ago, back in the thick of it.

Concerts, classes, lectures, and workshops continue all week as part of the Yiddish New York festival.

In Praise Of Ruth Rubin, Patron Saint Of Yiddish Song