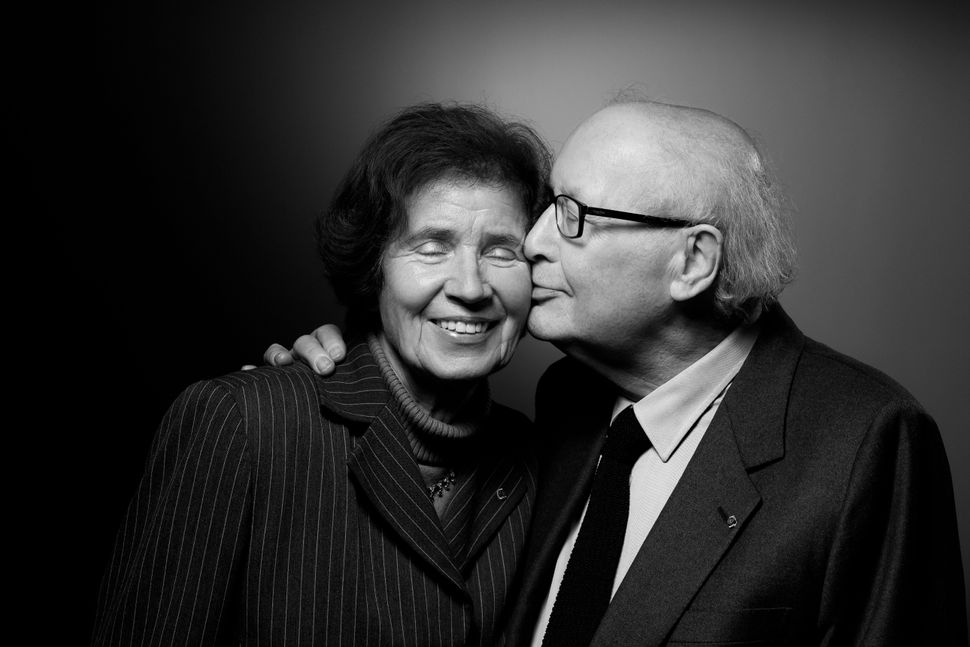 “My father had died in Auschwitz and I had behind me the suffering of French Jews. Beate carried with her the knowledge of Germany’s role in this suffering. Besides, we were naive and full of energy, so we did things we might not do when older and wiser.”

Serge Klarsfeld paused and smiled at me. He was aware of the improbable nature of both his confession and setting. Sitting in the lobby of a Houston hotel, surrounded by flat screens broadcasting football games, and well-dressed guests brushing past our chairs, the blue-suited and gentle-looking 84-year old Frenchman had just explained to me how he and his wife, Beate Klarsfeld. became “Nazi hunters.”

It was a telling remark made by a man who is not only a renowned writer of history — especially on the fate of French Jews in Vichy France — but also, with his wife, a powerful maker of history. Were it not for the Klarsfelds, the postwar history of Vichy France and the bringing to justice of many of its actors would have been dramatically different.

Last spring, Farrar, Straus and Giroux published “Hunting the Truth,” the English edition of Beate and Serge Klarsfeld’s memoirs, which won the Jewish Book of the Year Award Everett Family Foundation Award from the Jewish Book Council. In their gripping and, at times, unavoidably grim account of their lives as both witnesses to and actors in the long 20th century, the Klarsfelds worked hand in hand, writing alternating chapters. Their voices, though of different timbers, are always in harmony.

The book’s title, of course, plays on the moniker of “Nazi hunter,” attached to the couple long ago. But it also underscores the central place of truth, historical and moral, in the Klarsfelds’ entwined lives. Early on, Beate Klarsfeld declares: “My role is not to make people happy. It is to tell the truth as strongly as possible — bluntly, even savagely, if necessary.” Were we right, I asked Serge — Beate had returned to Paris after Dallas — to still believe in the power of truth, no matter how bluntly expressed, in our own age? At a time when an American president not only scorns established sources of truth but continues to build, with the truculent tenacity of a dung beetle, his own steaming ball of lies?

Nodding his head, Klarsfeld was careful not to name names. Yes, he agreed, the primacy of truth is not a given: “It is difficult to defend the truth, but we must nevertheless do so.” Of course, he allowed, the truths in works of history are not quite the same as they are in the works of scientists. Yet they remain, all the same, truths that are based on a great variety of archival documents. In principle, anyone with the means and interest can read these same documents.

In his scholarly works, like the magisterial “La Shoah en France,” Klarsfeld reprints many original documents. “I am a historian who gives the reader all the documents so he can make up his own mind. Those who want to find the truth can do so with the material I provide in my books,” he said. Indeed, his most moving work, “La Mémorial de la Déportation des Juifs de France,” is only documentation: the record — by name, age and date of transport — of the more than 70,000 Jews deported to Auschwitz from France.

But are books enough? Not standing alone, which is why the Klarsfelds have hunted not just the truth, but also the perpetrators of evil. Yet the “fighters for evil,” he told me as a nearby vacuum cleaner roared to life, “have more energy than the fighters for love.” But it is more complicated, because allied to the forces of active evil are the forces of inattention and indifference. In so many instances, ranging from Kurt Lischka and Herbert Hagen in Germany to Jean Leguay, René Bousquet and Maurice Papon in France, the Klarsfelds harvested criminals instead of hunting them. Like low-hanging fruit, these criminals had dangled in front of our eyes for years, yet they were entirely ignored.

Was Klarsfeld disturbed that such men had for so long led such quiet lives, undisturbed by the authorities or, as in the case of a Papon, praised and promoted by them? Not especially. He and his wife, he replied, always understood “the need of political context.” Just as the French are now preoccupied by material concerns — gesturing with his hands, Klarsfeld noted that even as we talked that Saturday morning, hundreds of thousands of French were protesting against increases in the price of fuel — so, too, in the 1950s and ’60s.

It wasn’t long, though, before Klarsfeld decided to act. “I understood by the mid-1970s that if we didn’t do something, Vichy would be rehabilitated. We had to change the vision of the French.” To be sure, the Klarsfelds did not work alone. A new generation of historians, led by an American. Robert Paxton, had already begun to dismantle the myth of Vichy as a shield, wielded by its leader, Marshal Philippe Pétain, all the while waiting for the sword brandished by Charles de Gaulle. Instead, under the leadership of men like Pétain, Bousquet and Pierre Laval, Vichy became the French franchise of Nazi Germany’s Final Solution.

Yet, Klarsfeld differs from Paxton on why nearly three-quarters of French Jewry survived the occupation. Whereas for the American it is largely a question of timing and geography, for the Frenchman it is instead a matter of decency and decisiveness. In our conversation, Klarsfeld insisted that Vichy’s anti-Semitic legislation was not a “referendum” voted on by the nation in 1940. Indeed, had it not been for the countless acts of assistance and resistance by the French, many more Jews would have lost their lives.

More than four decades after they set out to change the “vision of the French,” the Klarsfelds have accomplished so much more than can be reasonably expected of an “ordinary” man and woman. The official commemoration of the Vel d’Hiv roundup and the official recognition of France’s role in the Final Solution are just two of the Klarsfelds’ many achievements. And yet, as our conversation came to an end while other conversations continued in the bustling hotel lobby, Klarsfeld insisted that he and his wife were ordinary people living in extraordinary times: “If we had remained in ordinary times, we’d have also remained ordinary.”

As I watched the slight and frail man walk toward the elevator, it became clear that in our own extraordinary times, the example of the Klarsfelds’ particular case of ordinariness is more important than ever.

Robert Zaretsky teaches in the Honors College, University of Houston.