On Mars, A Jewish Quest For Life — And A Crater’s Tragic History 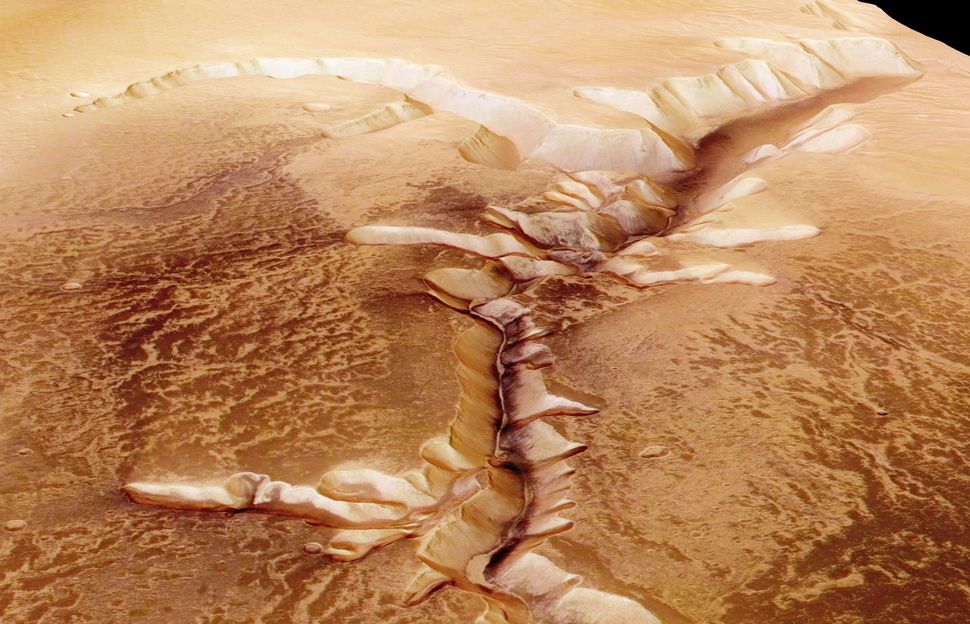 The discovery of life on Mars has been the stuff of scientific hope and speculative fascination for generations. Edgar Rice Burroughs put John Carter there, Ray Bradbury spun fantastic tales from the imagined landscapes of its dusty soil and, in 1976, NASA landed its two Viking spacecrafts on the Red Planet, making them the first earthly objects on its surface.

Now, the sole surviving biology experimenter for the Viking expedition, Gilbert Levin, has told the people living on this pale blue dot that he believes he found life on Mars 43 years ago.

Now, Levin is calling for more tests. “What is the evidence against the possibility of life on Mars?” he asked in an October 10 article for Scientific American. “The astonishing fact is that there is none.”

In the article, Levin breaks down how his experiment, Labeled Release, found compelling hints of microscopic murmurs on Mars. Labeled Release (or LR) did this by using a process Levin compared to Louis Pasteur’s storied experiment with a hay-infused broth, which was used to determine that heat killed microbes. LR introduced nutrients – tagged with radioactive carbon – to Martian soil samples and waited for any microbes present to produce gas as they went about their metabolic business.

Levin said that the results of the test, conducted over seven days, offered positive proof of life – four instances, in fact.

“The curves from Mars were similar to those produced by LR tests of soils on Earth,” Levin said. “It seemed we had answered that ultimate question.”

And yet, those experiments from the Viking program, were the last of their kind. Other experiments failed to find organic matter, and so NASA believed that the evident success of LR was, in fact, a string of false positives.

“NASA concluded that the LR had found a substance mimicking life, but not life,” Levin said.

Life detection instruments, Levin lamented, have not been a part of any subsequent Mars missions. Levin called this act of omission “inexplicable.”

Looking at history, he would appear to be right. On its first jaunt to Mars, NASA expended considerable resources on life-detecting devices. In an interview with Discover Magazine in 2016, Levin said that his LR was one of 20 devices sponsored by Houston. The cost of testing these contraptions turned out to be more than monetary.

Microbiologist Wolf Vishniac was the first man to receive funding from NASA for a life detection device for his “Wolf Trap,” a successful prototype that encouraged NASA to bankroll more of its kind. Vishniac was a born scientist, the son of Russian-American photographer Roman Vishniac, also a biologist. The older Vishniac is best-remembered for his photographs of pre-war shtetl life, but he was also an innovator in the field of microscopic photography, documenting the same infinitesimal creatures his son would come to study.

Despite its promise, Vishniac’s Wolf Trap was excluded from the Viking voyage because of its cost, weight and reliance on water, which was believed to be exceedingly scarce on Mars, Levin told Discover. Still, its creator stayed with the mission, going to the end of the Earth to test the instruments bound for Mars.

The Antarctic has the closest conditions to Mars that can be found on Earth and, according to Levin, Vishniac was confident the environment – which many believed was sterile – contained microorganisms in its soil. Having something to prove, he trekked to the icy continent with the prospective Viking devices – including Levin’s LR – in 1973. But on December 10 of that year, tragedy struck.

“Unfortunately, as he was retrieving samples for the LR test, he slid off a 1,000-foot cliff and was instantly killed,” Levin told Discover. “I still carry guilt over Wolf’s death, because it was my experiment that caused it.”

Vishniac, who was 51 at the time of his death, left behind an impressive legacy. His friend Carl Sagan paid a memorable tribute to his life on “Cosmos” and, while Vishniac’s instrument never made it to Mars – he did. The Vishniac Crater in the Martian Antarctic bears his name.

Given all that it took to probe Mars for life, and with organic matter discovered on the planet just last year, it seems odd for NASA to exclude instruments of the kind devised by Vishniac and Levin from its future missions. But NASA plans to do just that when it launches its next mission in 2020. Though, it hasn’t given up on the search for life entirely.

CNN reports, the new Mars rover will carry an instrument called SHERLOC – short for Scanning Habitable Environments with Raman & Luminescence for Organics & Chemicals – designed to search for evidence of past life on Mars. But, while NASA’s looking into the ancient past, why not revisit its more recent history, repeating the LR tests from 43 years ago?

Levin suggests they do exactly this, and have an expert panel review the findings. However, he cautioned, in 2016, he wouldn’t want any samples brought back to earth.

“I am certain the Martian soil contains microorganisms,” Levin told Discover, “so why bring them here when we don’t know whether they are pathogenic to Earth life?”

Levin offered an alternate venue for testing the samples: The moon.

On Mars, A Jewish Quest For Life — And A Crater’s Tragic History