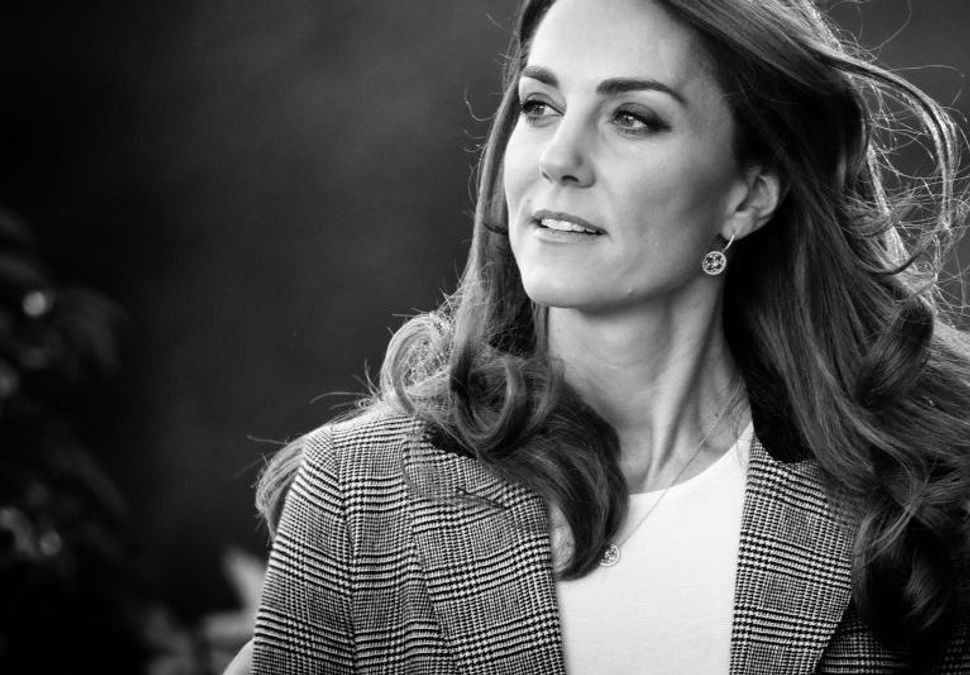 Kate Middleton’s portraits of Holocaust survivors will be displayed at an an exhibit later this year. Image by Getty

A U.K. exhibit commemorating the 75th anniversary of the liberation of Auschwitz includes works by an artist more often seen in front of the camera than behind it: Kate Middleton, the Duchess of Cambridge and an avid amateur photographer.

Middleton contributed two portraits to the Royal Photographic Society’s exhibit of photos of Holocaust survivors with their grandchildren: One of survivor Steven Frank with his grandchildren Maggie and Trixie, and one of survivor Yvonne Bernstein with her granddaughter Chloe. The photos — appearing alongside works by several well-known British photographers — put misconceptions about Middleton’s artistic ability to rest. As painstakingly composed as Middleton herself, the portraits are somber and strikingly accomplished.

As part of the commemorations for the 75th anniversary of the end of the Holocaust, The Duchess of Cambridge has taken photographs of two Holocaust survivors with their grandchildren. The first photograph features Steven Frank with his granddaughters, Maggie and Trixie. Alongside his mother and brothers, Steven was sent to Westerbork transit camp then to Theresienstadt. Steven and his brothers were 3 of only 93 children who survived the camp – 15,000 children were sent there. The Duchess also photographed Yvonne Bernstein with her granddaughter Chloe. Yvonne was a hidden child in France, travelling in the care of her aunt and uncle and frequently changing homes and names. The Duchess said: “I wanted to make the portraits deeply personal to Yvonne and Steven – a celebration of family and the life that they have built since they both arrived in Britain in the 1940s. The families brought items of personal significance with them which are included in the photographs. It was a true honour to have been asked to participate in this project and I hope in some way Yvonne and Steven’s memories will be kept alive as they pass the baton to the next generation.” The portraits will form part of a new exhibition opening later this year by @holocaustmemorialdaytrust, Jewish News and @royalphotographicsociety , which will feature 75 images of survivors and their family members. The exhibition will honour the victims of the Holocaust and celebrate the full lives that survivors have built in the UK, whilst inspiring people to consider their own responsibility to remember and share the stories of those who endured Nazi persecution. Portraits ©The Duchess of Cambridge

In a statement, Middleton said that she wanted to emulate Anne Frank’s “sensitive and intimate” depiction of the Holocaust. But even more visible in her portraits is the influence of the non-Jewish source from whom she took inspiration: the Dutch Baroque painter Johannes Vermeer. In both portraits, light intrudes subtly upon dark backgrounds, illuminating the subjects’ faces and richly colored clothes. Domestic objects are everywhere: a brocade tablecloth in one portrait, a plate of peaches in the other. Maggie Frank’s mustard-colored sweater is reminiscent of the color palette in Vermeer’s “Girl With a Pearl Earring,” while her sister’s red hair and half-smile recalls his mischievous “Guitar Player.”

Middleton’s choice of Vermeer as an influence suggests a careful, detailed approach to her project: Steven Frank, like Vermeer, is from the Netherlands, and Bernstein’s father hid there during the Holocaust. But beyond that geographical link, Vermeer’s place in art history adds serious depth to Middleton’s photographs. During the 17th-century Golden Age of Dutch painting, he and his peers reacted to an era of great turmoil by focusing on domestic scenes. In a century that saw an explosion of Dutch prosperity, a protracted war with Spain and a transition away from Catholicism, artists increasingly evinced the belief that societal upheaval can be depicted most effectively through scenes of everyday life, and that extraordinary events are most important for their effect on ordinary people.

Middleton’s survivor portraits echo the quiet historical cues Vermeer employs in paintings like “Officer and Laughing Girl,” which hints at a courting couple’s impending separation by placing them in front of a map of Holland and its enemies. She poses Frank holding a tin pot, which, like the map, is both a domestic object and a memento of suffering; an accompanying statement notes that his mother brought the pot to Theresienstadt and used it to cobble together small meals. Bernstein shows her German identification card to her granddaughter, but its text and Nazi symbols are obscured from view. The photos demonstrate an acute awareness of the outside forces that disrupt family life, but remain intently focused on the families themselves.

Today is #HolocaustMemorialDay, which takes place each year on the anniversary of the liberation of Auschwitz-Birkenau, and honours survivors of the Holocaust, Nazi Persecution, and subsequent genocides in Cambodia, Rwanda, Bosnia and Darfur. Earlier this month, The Duchess of Cambridge met two Holocaust survivors, Steven Frank and Yvonne Bernstein, as she took photographs for a project by @holocaustmemorialdaytrust, Jewish News and @royalphotographicsociety to mark 75 years since the end of the Holocaust. The Duchess’s photographs will be included in an exhibition of 75 images of survivors and their family members, which will open later this year. “The harrowing atrocities of the Holocaust, which were caused by the most unthinkable evil, will forever lay heavy in our hearts. Yet it is so often through the most unimaginable adversity that the most remarkable people flourish. Despite unbelievable trauma at the start of their lives, Yvonne Bernstein and Steven Frank are two of the most life-affirming people that I have had the privilege to meet. They look back on their experiences with sadness but also with gratitude that they were some of the lucky few to make it through. Their stories will stay with me forever.” – The Duchess of Cambridge Photographs © Kensington Palace

During the Blitz, Middleton’s great-grandfather by marriage, George VI, regularly visited the scenes of destruction with his wife, exposing himself to the same danger faced by ordinary citizens. The pluck and determination he embodied has become both a British national touchstone and a global brand — we’ve all seen the endless “Keep Calm and Carry On” paraphernalia. Yet just a few years before war broke out his own brother, who openly expressed sympathy for the Nazi regime, was Hitler’s guest at his favorite mountain retreat. Meanwhile, the ranks of the British aristocracy were rife with Nazi sympathizers: Sir Oswald Mosley, leader of the British Union of Fascists, married socialite Diana Mitford with Hitler in the audience, and members of the Right Club, a secret society of right-wing politicians and aristocrats, greeted each other with the slogan “Perish Judah.”

Since her ascension to the royal family, Middleton’s coiffed charm and scandal-free background has helped deflect attention from plenty of royal bad behavior, from her grandfather-in-law’s history of racist remarks to Prince Andrew’s longtime friendship with Jeffrey Epstein. By sympathetically portraying Jewish suffering and enfolding Jews into the larger British narrative of grit and survival, she’s beginning to correct yet another unsavory episode.