A Year After The Tree Of Life Shooting, Pictures Of Survivors Urge Pittsburgh To Remember

On October 17, 60 oversized images of Holocaust survivors appeared alongside walking paths in and around the University of Pittsburgh campus.

The images, eight-by-five-foot photographs printed on weatherproof canvas, are part of Luigi Toscano’s exhibition “Lest We Forget,” an effort the German-Italian artist began in 2014. That year, Toscano set out to interview survivors and present their portraits in major cities around the world to jog the collective memory of the Holocaust — a memory which is disappearing along with survivors. Each image is accompanied by a caption chronicling the survivor’s life during World War II. So far, Toscano has photographed over 200 survivors and displayed their faces and stories in Berlin, Boston, Vienna, Lviv, New York City and Washington, DC outside the Washington Monument.

Before the Tree of Life shooting on October 27, 2018, a city the size of Pittsburgh was not an obvious candidate for the exhibition, says Lauren Bairnsfather, director of the Holocaust Center of Pittsburgh, a nearly 40-year-old institution in the Squirrel Hill neighborhood.

“We were only able to bring this exhibit here because of that horrific day,” Bairnsfather told the Forward.

Bairnsfather reached out to Toscano in January, a few months after the accused gunman, Robert Bowers, killed 11 worshippers at the Tree of Life synagogue in Squirrel Hill. Toscano told her he already had Pittsburgh on his mind.

In February, Bairnsfather took the photographer to the University of Pittsburgh campus to meet Pam Connolly, the school’s vice chancellor for diversity and inclusion and Kathy Humphrey, the university’s senior vice chancellor for engagement. They walked from the school’s iconic, Late Gothic Revival Cathedral of Learning and onto the main green. The group knew instantly that it was the perfect spot for the exhibit.

“It has to be right here,” Bairnsfather recalled thinking.

The 60 photographs, which include 16 new portraits of Pittsburgh-area survivors, are installed in the closest thing Pittsburgh has to a city center, Bairnsfather said. They confront pedestrians near the Carnegie Library of Pittsburgh and the Carnegie Museum of Art. One image stands outside the library of Chatham University, a 10-minute walk from Tree of Life. One of the new photographs is of Judah Samet, a Holocaust survivor who missed the Pittsburgh shooting by minutes because he was running late for services. 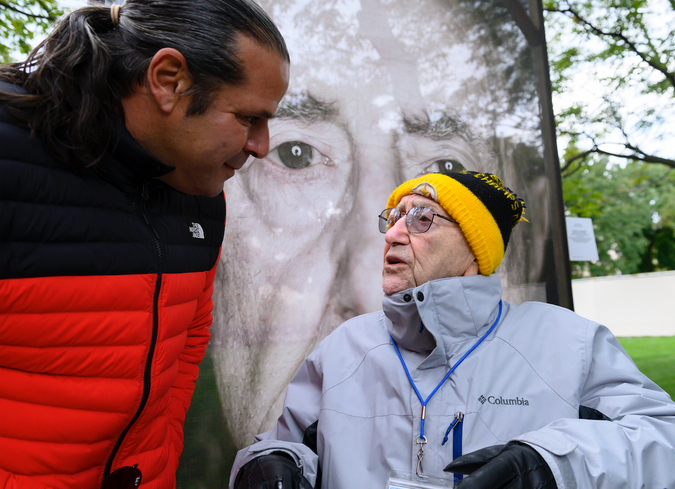 “We’ve really been able to put these photographs in significant places: Places of learning, natural thoroughfares for foot traffic,” Bairnsfather said. “The whole city now is involved in this act of remembrance.”

Having the exhibit on an open college campus was an opportunity for Humphrey and her team to engage the community and her students with both the horrors of the past and the current climate of hate.

“Our students, for some of them, [the Holocaust] is something that happened a long time ago,” Humphrey said. “Having the reality that there are people who live with us today, who experienced it, who know about it is important…. That it stands here during the anniversary of the Tree of Life is another important message to stand against hate.”

The university is hoping to go beyond public art with the exhibit, making it the subject of an accredited course with the school’s Jewish studies program. 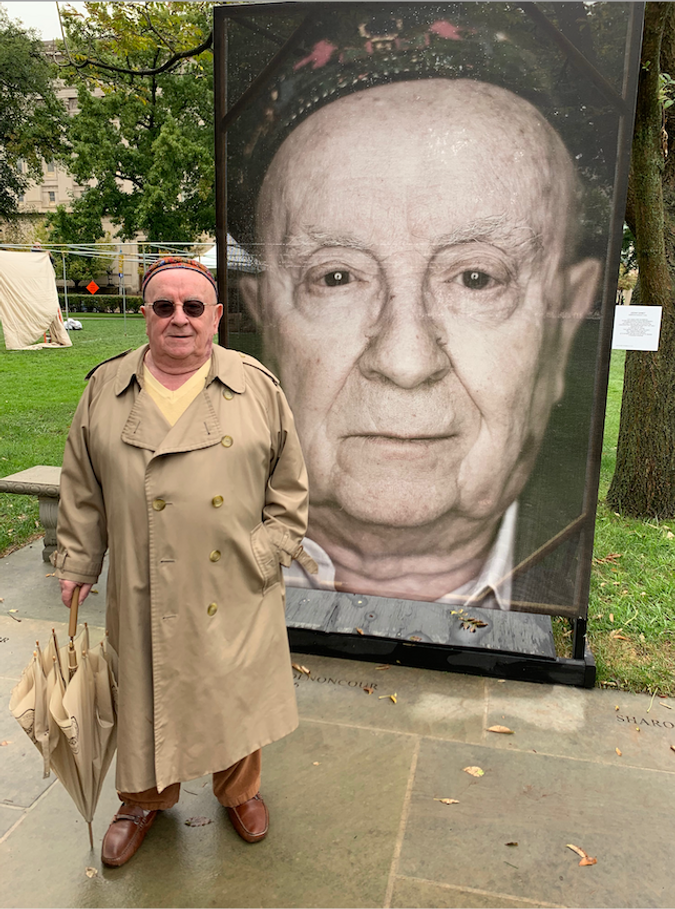 Judah Samet, a Holocaust survivor, who missed the Tree of Life shooting by minutes, with his portrait by Toscano. Image by Courtesy of the Holocaust Center of Pittsburgh

In the past, the outdoor nature of Toscano’s installation has made it vulnerable to vandalism. In May, when the portraits were on view in a plaza in Vienna, a number of the portraits were tagged with anti-Semitic graffiti. Later, some were slashed with a knife. The vandalism prompted groups of Christians and Muslims to keep vigil at the scene of the crime. A group of young Muslim women stitched the portraits back together.

Campus police have worked with a security expert, Brad Orsini, who advises the Jewish Federation of Pittsburgh, to develop a security plan. Guards are posted along the path for 24 hours, Humphrey said, and there are cameras monitoring the exhibit.

Since the installation opened last Thursday, busloads of elementary school children, countless university students and members of the community have seen it. The university’s chancellor, Patrick Gallagher, told Bairnsfather that, from his office window, he often sees Pitt students on their way to class stopped dead in their tracks by the images.

“I think it is so moving. And as serious as the looks on their faces are, in some way I want it to be empowering,” Bairnsfather said. “This is the same way I felt on October 27 and October 28.”

Before photographing the Pittsburgh survivors, who trace their roots to Germany and Poland as well as Greece and Bulgaria, Toscano spoke with many of them in their native languages, disarming his subjects and forging a real connection to their stories.

During an October 16 preview, Humphrey met some of the survivors herself. One woman was an alumnus of the University of Pittsburgh, a fact that brought the exhibit home for Humphrey. But another survivor articulated what Humphrey hopes will be the show’s message.

“One of the women said to me, ‘This isn’t a story; this is something that I lived,’” Humphrey said. “Making the connections is what has made this exhibit so alive and real and much more than these large pictures. Behind every large picture is a large story.”

A Year After The Tree Of Life Shooting, Pictures Of Survivors Urge Pittsburgh To Remember