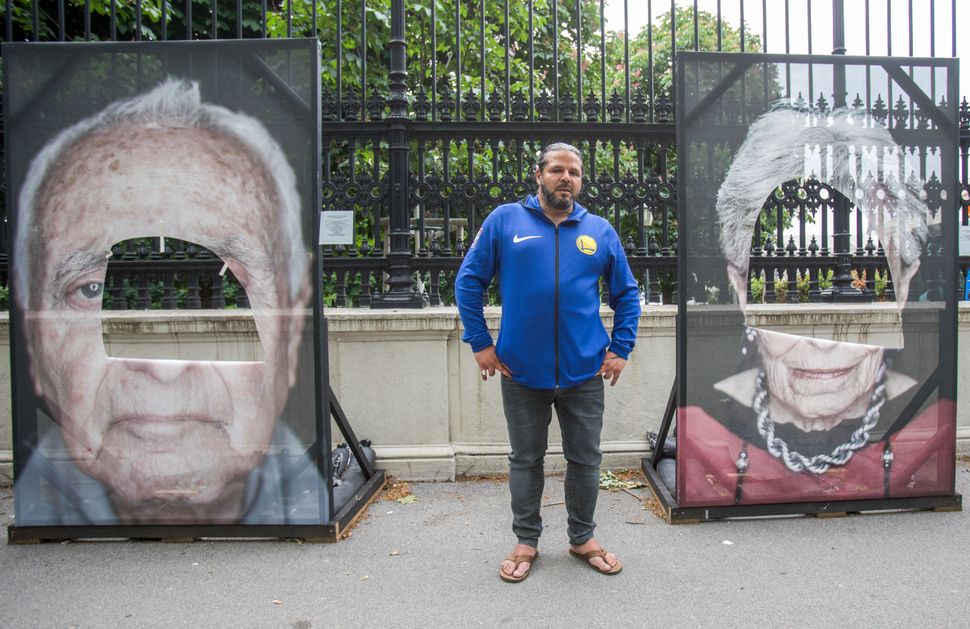 German-Italian photographer Luigi Toscano stands next to vandalised large-format pictures of Holocaust survivors taken by him for his outdoor exhibition “Lest we forget” on May 27, 2019 in Vienna, Austria

On the night of Sunday, May 26, a public art installation in Vienna featuring portraits of Holocaust survivors was slashed with a knife by an unknown assailant. It wasn’t the first time.

The installation by the German-Italian artist Luigi Toscana, called “Lest We Forget,” includes 70 blown-up photographs of survivors printed on eight-by-five foot weather-proof textiles. 10 photographs were slashed, according to Deutsche Welle, a German news service, but the Sunday attack was only the latest.

Vandals have targeted “Lest We Forget” since it was installed on Vienna’s Ringstrasse street in early May. A week before the slashing, the display was tagged with anti-Semitic graffiti, including swastikas and the words “1 Jesus = 6,000,000 Jews,” the Jewish Chronicle reported. Deutsche Welle noted seven previous attacks on the work.

An interfaith effort to support Toscano’s work has formed in response to the repeated vandalism. On Monday, May 27, the day after the most recent attack, women from Muslim Youth Austria, an organization aimed at serving young Muslims of Austrian-European identity, arrived at the scene of the crime to sew the slashed portraits back together. While they mended Toscano’s work, the youth division of the Catholic charity Caritas and Nesterval, an alternative artists’ collective, stood guard. Nesterval also announced its intention to keep a vigil at the site to dissuade further attacks until Friday, May 31.

Toscano, who called the attack “right-wing radicalism,” told Deutsche Welle he was “especially touched” by the restoration of the photos.

At the first night of the vigil, Vienna’s mayor Michael Ludwig called the vandalism of the installation “cowardly” and claimed the actions targeted not only Jews but the “core values of our society.”

Toscano told Deutsche Welle he reached out to a number of the survivors whose images were defaced. They told him, he said, “now more than ever before these portraits need to be shown.”