For Pittsburgh Residents, A Year Of Grief And Elbow Grease 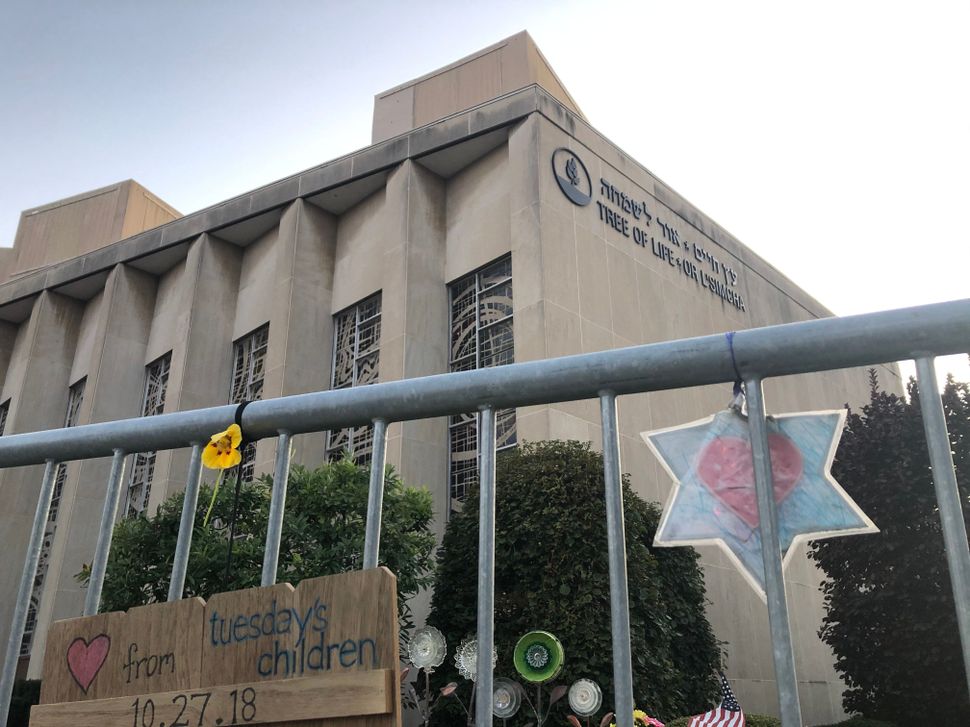 Seymour Drescher approached the Tree of Life*Or L’Simcha building in Pittsburgh and was turned away during the horrific shooting last October. He always thought he had escaped unscathed.

But this Rosh Hashanah, when the congregants who normally blew the shofar were absent, he realized he had not.

“When the shofar blast came out, the final one, tekiah gedolah, I just felt like it was a wail from ghosts,” he said.

Next Sunday, October 27, marks a year since the shooting, and Drescher is one of many Jews in Pittsburgh dealing with lingering effects from the event that killed 11 people and injured six. The year was consumed with both the work of grieving and logistical questions of money and synagogue space.

Members of Pittsburgh’s Jewish community described unshakeable mental images, like the “dissolved” face of a widow finding out her husband had been killed and SWAT teams zooming toward Tree of Life. They spoke of children having difficulty sleeping and a general sense of dread entering the High Holidays and the subsequent one-year mark.

But aside from emotional fortitude, the past year has also required calculators, bi-weekly meetings and elbow grease.

The Tree of Life*Or L’Simcha synagogue building also held two other congregations last year, New Light and Dor Hadash. All three congregations, along with the rest of the large and active Jewish community in the neighborhood of Squirrel Hill, had to adapt to a new reality after the shooting. The victims needed safe places to pray while they tried to make the difficult decision of whether to return to their building. That meant other synagogues in the area were welcoming a big influx of grieving guests.

After a year of reflection and conversation, the Tree of Life congregation announced on Friday that they will return to the building that bears its name, said Sam Schachner, the synagogue president. New Light and Dor Hadash have not yet decided whether they will join Tree of Life, he said.

Since the shooting and for the foreseeable future, Dor Hadash prays at neighboring Rodef Shalom Congregation, and New Life found a home at another temple, Congregation Beth Shalom. Tree of Life congregants pray at Rodef Shalom for Friday night and Saturday morning services, and at Beth Shalom during the week.

Uncertainty about the building was one of the community’s greatest emotional, financial and logistical challenges. First closed as a crime scene, it remained shuttered. It’s surrounded by a fence draped with drawings and paintings from children, including students at Marjory Stoneman Douglas High School in Parkland.

“I looked at my synagogue; it looked like a tombstone,” said Tree of Life congregant Judah Samet. Samet was interned as a child at Germany’s Bergen-Belsen concentration camp during the the Holocaust, and, like Drescher, arrived late to synagogue and narrowly missed the shooting. “We are the wandering Jews again within America, you know. We don’t have a home. That’s the only thing that really bothers me.”

After the shooting, synagogue leaders found mental health counseling for families of victims, witnesses and others through federal agencies like the Center for Victims and local groups like Jewish Family and Community Services.

Squirrel Hill connected with other communities impacted by mass violence. Synagogue leaders traveled to Charleston, South Carolina, to visit Mother Emmanuel Church, which was targeted by a shooting in 2015. They were enveloped in a group hug and marched in a parade.

Leaders learned much from other communities that had undergone mass shootings, said JCC CEO Brian Schrieber.

The Jewish Federation of Greater Pittsburgh set up a “Victims of Terror Fund” that collected the money streaming into the community after the attack — more than 8,500 separate donations. They established a committee of people in November 2018 that decided how to distribute the money, $6,302,803 in total. More than $5 million of those dollars have been allocated to individuals and families directly impacted by the shooting.

The community also had to sort through gifts and write thank-you notes to well-wishers all over the world. Dor Hadash even met to discuss the receipt of cases of olive oil donated from Israel (the bottles were distributed during a Passover seder).

After some individuals and foundations donated money specifically toward Jewish community security, the Federation also established a fund for that cause. Security is expensive: aside from facility upgrades like locks, alarms and panic buttons, institutions also have to pay for personnel like guards.

The alleged shooter, Robert Bowers, had entered the building with an AR-15-style assault rifle and at least three handguns. He had posted anti-immigrant and anti-semitic sentiments online, and targeted one of the congregations in the building, Dor Hadash, for its work with HIAS, a Jewish nonprofit that serves refugees.

There’s a sad irony in the community’s new financial priorities, said Rabbi Aaron Bisno of Rodef Shalom. Bowers first wounded the community by killing 11 members, and he continues to hurt it by causing a rerouting of money and energy away from things like study programs and synagogue staff salaries and towards security upgrades.

“We’re having to spend these resources in that direction because of a small group of people that wish us ill,” he said.

While faith leaders in the community, including Bisno, pushed for Bowers to receive a plea deal and a life sentence, for religious reasons and to spare congregants the public spectacle of a trial, the Justice Department announced in August that it would pursue the death penalty. Squirrel Hill residents found out this month that jury selection is scheduled to begin on September 14, 2020.

That’s just a few days before Rosh Hashanah. A year from now, the Jews of Squirrel Hill will be in a different place in their journey, but if the next year is anything like this one, they will feel even more connected.

The sharing of synagogue space and the collaboration required in the aftermath of the shooting has been something of a silver lining for many in the community.

For Pittsburgh Residents, A Year Of Grief And Elbow Grease