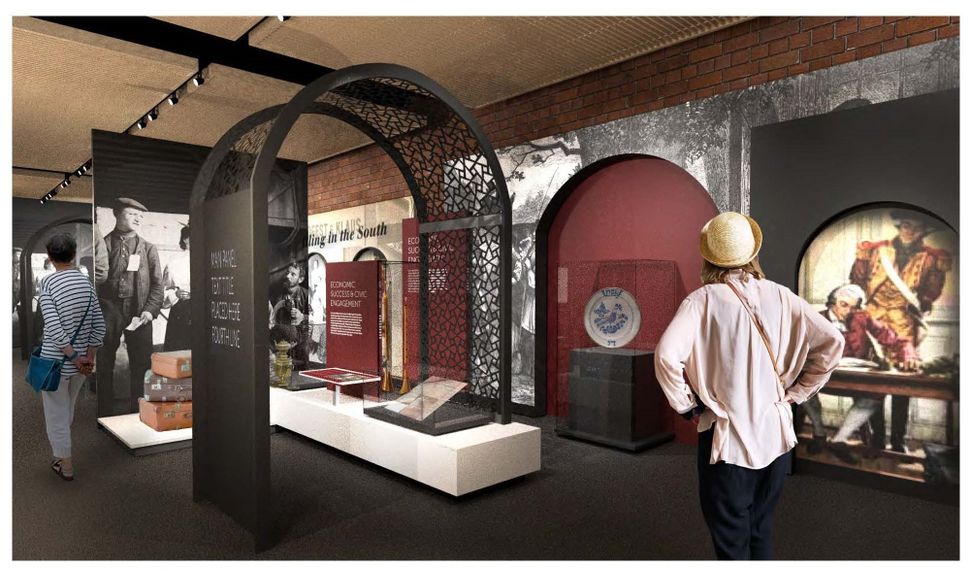 For 26 years, the only museum devoted to Jewish life throughout the American South operated on the grounds of a Reform summer camp in Utica, Miss. Since opening its doors in 1986, the Museum of the Southern Jewish Experience was a hub for Southern Jews looking to get in touch with their region’s vibrant past or to donate the remnants of their dwindling small town communities. For Kenneth Hoffman, it was also a place to stay cool in the swelter of a Mississippi summer.

“The cabins were not air-conditioned, but the museum was,” said Hoffman, a former camper and counselor at the URJ Henry S. Jacobs camp. “So it was always a popular destination.”

But Hoffman returned to the museum for more than its temperature control. He interned there during a summer off from graduate school at Tulane University, where he got his Master’s of History in 1993. The museum shuttered, with an eye toward expansion, in 2012, while Hoffman was working as the director of education at the National World War II Museum in New Orleans. His background and experience won him a lunch with its leadership and, a few years later, he is now spearheading the museum’s grand re-opening in his home state of Louisiana as the institute’s executive director.

The museum has come a long way since its days at the Jacobs Camp, with a new building boasting 9,000 square feet of exhibit space set to open this fall a few blocks from New Orleans’ French Quarter in the heart of the city’s museum district.

The museum is devoted to 13 states: The 11 Confederate ones plus Kentucky and Oklahoma. Not Maryland, though. “Maryland has a wonderful Jewish museum already,” Hoffman said. 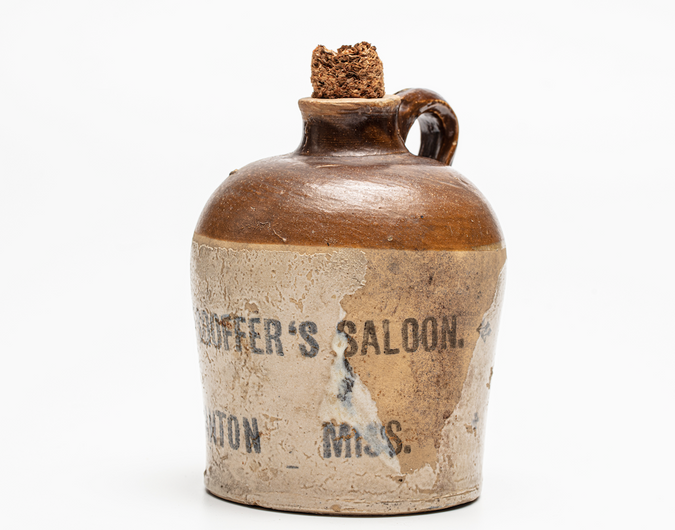 Leon Hersdorffer of Mississippi owned a wholesale and retail liquor distribution operation. Because Mississippi passed its first statewide prohibition law in 1907 (enacted in 1908), this jug dates to before that time. Image by Courtesy of the Museum of Southern Jewish Experience

Each state has its own unique Jewish history, though the narratives as a whole diverge from the early Jewish American experience most Yankees may be familiar with.

“The story of Jews in the South parallels a lot of American history,” Hoffman said, explaining that it begins in Colonial times (albeit Spanish and French colonies, not British ones).

Jews who moved to the early South from abroad largely found their niche as merchants, having little experience with agriculture. Because much of the non-Jewish population consisted of farmers, Jewish peddlers and dry goods store owners provided a necessary service. While statistically tiny in Southern communities — around 2% or fewer most places — Jews had an outsized influence, becoming integral parts of the community as active philanthropists and even mayors of large and small towns. They didn’t necessarily have delis or a large choice of shuls, but they did have something else: That much-talked about Southern hospitality. 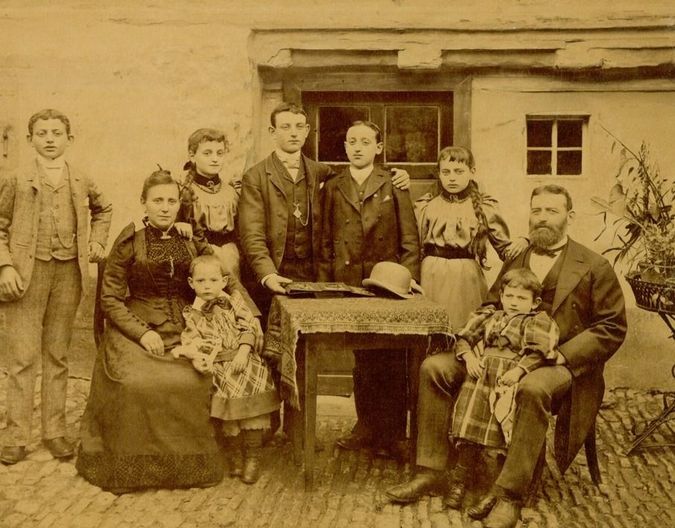 The Strauss family, Germany, c. 1890. Members of the Strauss family moved to Louisiana and established F. Strauss & Son, Inc. The wholesale grocery company became a staple of the Louisiana town. Donated by Morris Mintz. Image by Courtesy of the Museum of Southern Jewish Heritage

“A lot of people would think that the South would be inhospitable to Jews, and in many cases the reverse is true,” Hoffman said. “The South is a very religious part of the country and Jews are considered people of the Book — we’re the originals, we’re the Old Testament people and so there’s a certain reverence for that.”

The museum aims to cover the whole sweep of Southern Jewish history, including artifacts like a still-corked pre-Prohibition saloon jug from Mississippi; a yellowed, 1840s Hebrew and French prayer book that belonged to an Alsatian immigrant to Donaldsville, LA and a New Orleans synagogue’s tzedakah box from the 1900s that, at some point in time, had a metal plate reading “Social Justice” hammered onto it. It will also feature more contemporary stories, like oral histories from Holocaust survivors who resettled in the South and Jewish members of the Civil Rights movement. Hoffman admits that the timing of the museum’s opening coincides with a rise in anti-Semitism, but its mission is forward-looking.

“We’re not political, because that’s not a good place to be and things change,” Hoffman said. “We’re building this museum for the long run and so who knows what the landscape will be in five years, 10 years.”

However, the current moment does add an urgency to the museum’s goal of advancing tolerance and understanding, which has been a help with fundraising efforts. The museum is also looking to the broader Jewish — and non-Jewish — community to provide artifacts and stories. While states bordering Louisiana are well represented in the collection, the Carolinas, Eastern Tennessee and Kentucky need beefing up. Hoffman says the museum is also hoping to accrue items from the Civil War and even the Revolutionary War. 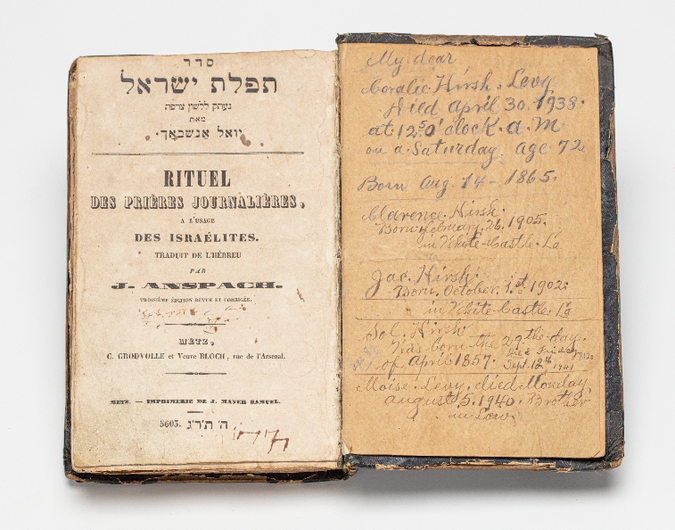 Prayer book in French and Hebrew, 1843-1844. The prayer book was donated by John Green III of Lafayette, LA, and belonged to his uncle, Jacob “Jac” Hirsh. Jac’s mother’s side of the family immigrated from Savene, Alsace, to Donaldsonville, LA, in the mid-1800s (hence the French language prayer book). Image by Courtesy of the Museum of the Southern Jewish Experience

“We would love to get that patch that’s signed by George Washington to a Jewish soldier if such a thing exists,” Hoffman said.

Of all the museum’s holdings, his favorite is a “crazy quilt,” a kind of quilt without a set pattern, that was made by the Jewish Ladies’ Sewing Club of Canton, Miss., in 1885 to be raffled off to help fund the building of a synagogue there. 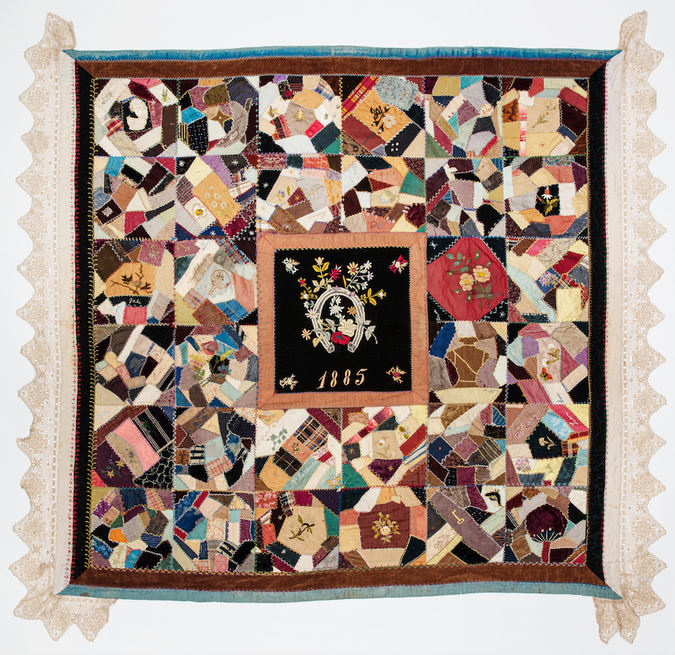 A “crazy quilt” made to be raffled off to help finance the building of a Mississippi synagogue. Image by Courtesy of the Museum of the Southern Jewish Experience

“What is a quilt?” Hoffman said. “A quilt is lots of little pieces that come together to make something greater than the sum of its parts, it’s crazy but it’s beautiful, it has a social aspect of ladies sitting together sewing, it has a religious aspect.”

The quilt will be part of a larger interactive experience when the museum opens, although the exact details of how that will work are being kept under wraps for now. But it’s a fitting stand-in for the diversity and ingenuity of Jewish life in times past — even if the temple it helped build is, like so many other 19th Century Southern shuls, long gone.

Hoffman says the original museum began as a kind of warehouse for disappearing Jewish communities, with parents of campers donating objects from their sold synagogue buildings. But the new museum, with its over 7,000 artifacts strikes a note of resilience and adaptation.

“Even though the small towns are disappearing, it’s not a story of decline,” Hoffman said. “It’s a story of evolution and change, and that’s a big part of what Southern Jews are always dealing with, which is ‘How do I fit into this society?’ and making choices. That’s what gives our story universal appeal.”