50 years later, how should we remember the Kent State massacre? 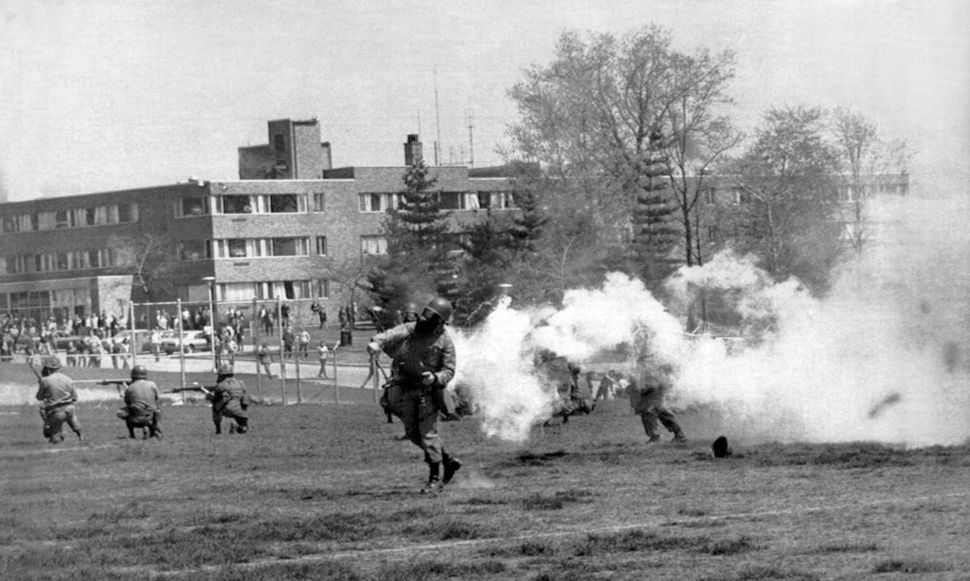 Tear gas is thrown on the campus of Kent State in 1970. Image by Getty Images

As the 50th anniversary of the Kent State shootings on May 4, 1970 approaches, the question arises, what should the Jewish response be today to what was, in some ways, a Jewish tragedy?

Three of the four students fatally shot on May 4, 1970, by the Ohio National Guard at Kent State University in Kent, Ohio were Jews: Allison Krause, Sandra Lee Scheuer, and Jeffrey Miller. The fourth victim, non-Jewish, was William Schroeder.

This is a statistical oddity, as in 1970, a student population of about 15,000 at Kent State only included about 750 Jews, or five percent of the total.

Even odder, Scheuer was not a protestor against the Vietnam War-era bombing of neutral Cambodia by US military forces, but a mere passerby, walking with one of her speech and hearing therapy students, when she was caught in gunfire.

More significant than this mystery is the interfaith sensibility of the Jewish students’ advocacy. In May 2000, on the 30th anniversary of the shootings, Miller’s mother Elaine Holstein wrote in the Seattle Times: “At the age of 8, Jeff wrote an article expressing his concern for the plight of black Americans. I learned of this only when I received a call from Ebony magazine, which assumed he was black and assured me he was bound to be a ‘future leader of the black community.’”

As a young boy, Miller understood that racism against one minority group affects all minorities, a lesson still worth contemplating in this anniversary year.

On May 15, 1970, 11 days after the Kent State shootings,, two students were shot and killed at Jackson State University, a predominantly African American institution, by the Jackson Police and Mississippi State Police.

The students, Phillip Gibbs and James Green, the latter a high school athlete, died after some days of protest at Jackson State against the shooting of the Kent State antiwar protesters.

The Jackson State deaths of black students have generally been less remembered and commemorated than those of white students at Kent State.

This was decidedly not the Jewish way of responding to injustice, at least in the view of one speaker at a memorial service for Miller in New York, four days after the Kent State shootings.

Albert Vorspan, director of the Social Action Department of the Union of American Hebrew Congregations, blamed the “brutal demagoguery” of President Richard Nixon’s administration for leading to the deaths of “the young flowers cut down in Ohio.” Vorspan (1924-2019) would serve as director emeritus of the Commission on Social Action of Reform Judaism and senior vice president of the Union of American Hebrew Congregations, which became the Union of Reform Judaism.

Vorspan stated: “We must find the strength to energize the Jewish community in a massive effort to save America. We have slunk from our role as the catalyst of social conscience in American life.” He called the current “cancer of malaise [and] despair” the “most irreligious and un-Jewish” attitude possible.

The playwright Arthur Miller would later evoke this ‘70s malaise in a preface to his play “The Archbishop’s Ceiling,” written in the 1970s:

“Early in the decade the Kent State massacre took place, and while the anti-Vietnam War movement could still mobilize tens of thousands, the freshness had gone out of the wonderful sixties mixture of idealism and bitterness… There was a common awareness of exhaustion.”

Not long after the shootings, two Kent State sociologists published research implying that violence occurring at protests radicalizes students, Jews among them, while making those already reticent about protesting feel more intimidated and exhausted.

So at times of political malaise and enervation, what is the Jewish thing to do?

From the families of the Kent State victims, a reply emerged to ambient depair. Elaine Holstein gave many outspoken interviews to the press until her death at age 96 in 2018.

Krause was a World War II veteran who had supported hawkish policies in Vietnam and squabbled with his peacenik daughter. Yet after she was slain, Krause leapt into action and endured extended legal battles to force the state of Ohio and its National Guard to apologize for the slaughter and agree to a small civil settlement out of court.

When this was finally achieved in January 1979, Krause and other parents signed an open letter, concluding:

We have learned through a tragic event that loyalty to our nation and its principles sometimes requires resistance to our government and its policies — a lesson many young people, including the children of some of us, had learned earlier. That has been our struggle — for others this struggle goes on. We will try to support them. For Allison, Sandra, Jeffrey and William. For Peace and Justice. Shalom.

That the final word of this missive was Shalom speaks to the fundamental Yiddishkeit of its perspective. Krause died in October 1988, but his spirit surely hovers over the semicentennial remembrance, just as his daughter’s does.

Among Jewish students at Kent State during that era, others have also become activists, like the sociologist Elaine Wellin, who was protesting on May 4, but was spared by the bullets.

In addition to nonfiction books by Jewish authors, notably a study from 1971 by Isidor Feinstein (I. F.) Stone that captures the turmoil of the era, there have been abundant echoes of the Kent State tragedy in creative work.

Among tributes in art, the most controversial has been a bronze sculpture by the American Jewish artist George Segal (1924–2000), of The Binding of Isaac, from The Book of Genesis 22:1-19. An earlier investigation of this theme in plaster by Segal is currently on display at New York’s Jewish Museum until October 2020.

In 1978, Segal was commissioned to create a bronze sculpture to commemorate the Kent State shootings by a private foundation, in agreement with Kent State University. But university officials found Segal’s chosen subject of Abraham’s Sacrifice of Isaac inapposite and the bronze was rejected. It was finally installed at Princeton University, where it has remained ever since, entitled “Abraham and Isaac: In Memory of May 4, 1970, Kent State University.”

For Segal, Isaac’s binding was an example of a paternal threat with a positive ending. The sculptor saw his artwork as focusing on the older man’s moral challenge, rather than the youngster as victim.

In preparations for his work, Segal referred to the Danish philosopher Søren Kierkegaard’s speculations about Abraham’s anxiety during the long journey with his son to the mountainous region of Moriah to follow God’s instructions.

Segal was especially influenced by Kierkegaard’s “Fear and Trembling” which described Abraham as a man who “lives in hope.”

There have been hopeful suggestions that for the 50th anniversary commemorations, Segal’s sculpture might be moved to its originally intended site, the Kent State campus. This gesture of humanism, activism, and tolerance would echo what Arthur Krause, Albert Vorspan, and others achieved as Jewish rejoinders to the events of May 4, 1970.

50 years later, how should we remember the Kent State massacre?