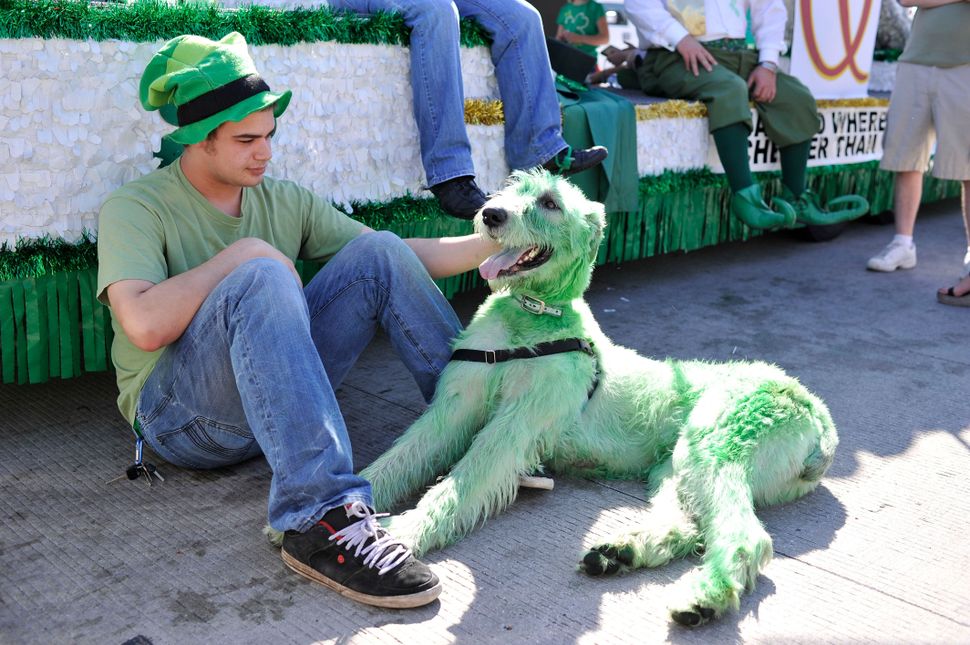 Editor’s Note: This article was originally published in the Forward on March 16, 2018.

If you are Jewish and you feel drawn somehow to celebrating St. Patrick’s Day, there are more than a dozen good reasons why.

St. Patrick’s Day and Purim typically appear on the calendar within a few weeks of each other. In the same way that on Purim one is encouraged to drink to the point where one cannot tell the difference between “Mordechai” and “Haman,” so too on St. Patrick’s Day are Irish celebrants encouraged to drink enough so that they cannot tell the difference between “St. Patrick” and “the Queen of England,” according to Irish Talmudic lore.

The story of the original 5th century Patrick, who became the patron saint of Ireland, has numerous parallels to the Biblical stories of Joseph and Moses. Like those two, Patrick spent a significant part of his youth in captivity, during which time he worked as a shepherd and spent hours communing with the Lord. Patrick also had his own burning bush moment, when he saw a vision of a letter carrier handing him a missive titled “The Voice of the Irish.” When he read the letter, he could hear the voices of the people of Ireland crying out to him, “We appeal to you, holy servant boy, to come and walk among us.” Eventually, Patrick became a spiritual leader in Ireland, converting thousands of pagans to Christianity. But he was always something of a foreigner, having been born in Roman England. Both Joseph and Moses, being strangers in the land of Egypt even when they served the Pharaoh, could certainly relate.

Perhaps St. Patrick is most remembered for having chased the snakes out of Ireland – how else to explain why there aren’t any snakes there? Moses and Aaron, of course, had their own bit of fun with snakes, as recounted in Exodus 8-13, wherein at Moses’s prodding, Aaron turns his staff into a snake, which then proceeds to eat all the Egyptian necromancers’ staffs-turned-into-snakes.

In modern times, the Irish Gaelic language has been superseded in large part by English as the first language spoken in and out of Ireland by the Irish people, much like what has happened to Yiddish among Jews of Ashkenazi origin.

Throughout my youth, I kept hearing that the mayor of Dublin was Jewish. In fact, in 1956, [Robert Briscoe](https://en.wikipedia.org/wiki/Robert_Briscoe_(politician “Robert Briscoe”) became the first Jewish Lord Mayor of Dublin, although he was not the first Jewish Mayor in Ireland. That title belongs to William Annyas, who was elected Mayor of Youghal, County Cork, in 1555. Briscoe, born to Lithuanian-Jewish immigrants Abraham William “Briscoe” Cherrick and Ida Yoedicke, was active in the Irish Republican Army and a member of Sinn Féin. He was a colleague of Irish nationalists Éamon de Valera and Michael Collins. Briscoe served in the Irish parliament for nearly 40 years, from 1927 to 1965. Upon his retirement, his son, Ben, took over his seat in parliament, where he served for a further 37 years.

Briscoe was also an admirer and friend of Zionist leader Ze’ev Jabotinsky. The Irish and the Jews share the historical experience of having had their modern nations forged in uprisings against English colonialism. Jabotinsky made a pilgrimage to Ireland, where he received training from Briscoe in guerrilla tactics to use against the English in Palestine. Later on, Briscoe advised Menachem Begin on how to transition his paramilitary organization, the Irgun, into a political party, which became Herut, the main party of the Likud coalition.

After learning that the Lord Mayor of Dublin was Jewish, Yogi Berra allegedly said, “Only in America!”

Irish music is really just klezmer with an Irish accent. Irish vocalist Susan McKeown has recorded and performed with the Grammy Award-winning klezmer outfit The Klezmatics. Before joining the group, Lisa Gutkin was best known as a leading fiddler on the Irish music scene, having performed or recorded with the likes of Tommy Sands, John Whelan, Steve Cooney, and Cathie Ryan.

Historian Shaylyn Esposito, writing in Smithsonian Magazine, says that what we think of today as Irish corned beef is actually Jewish brisket thrown into a pot with cabbage and potatoes. The Irish originally ate a dry, salted beef that came from England. When they came to America and began shopping at kosher butchers on the Lower East Side, they discovered brisket, a kosher cut of meat from the front of the cow, the salting and slow cooking of which transforms the meat into the extremely tender, moist, flavorful corned beef we know of today.

Writing of Jewish-Irish affinities, Esposito also notes, “It is not a coincidence that James Joyce made the main character of his masterpiece ‘Ulysses’, Leopold Bloom, a man born to Jewish and Irish parents.”

The annual Israel Independence Day Parade in New York City was clearly modeled after the St. Patrick’s Day Parade, both of which are essentially celebrations of ethnic pride.

Irish-Jewish love affairs have been celebrated in American popular culture at least as far back as the 1922 Broadway comedy, “Abie’s Irish Rose,” about an Irish Catholic girl and a young Jewish man who marry despite the objections of their families. The play is said to have inspired the husband-and-wife comedy duo Jerry Stiller and Anne Meara, and its premise formed the basis of the controversial 1972-73 TV series, “Bridget Loves Bernie.”

In fact, not all immigrant Jews came directly from the Pale of Settlement to the Lower East Side in the late 19th century. Some came by way of Ireland, where they picked up enough of an identity to form the Loyal League of Yiddish Sons of Erin. As one member told an interviewer from NPR in 2013, “There’s nothing quite like listening to Yiddish spoken with [an Irish accent].” (For years, Stiller and Meara performed at the group’s annual banquets.)

Last word goes to the Irish-Jewish Tin Pan Alley songwriting duo, William Jerome and Jean Schwartz, who celebrated Irish-Jewish kinship in their 1912 song, “If It Wasn’t for the Irish and the Jews”:

What would this great Yankee nation really really ever do

If it wasn’t for a Levy, a Monahan or Donohue

Where would we get our policemen

Why Uncle Sam would have the blues

Without the Pats and Isadores

There’d be no big department stores

If it wasn’t for the Irish and the Jews

Talk about a combination, heed my words and make a note

On St. Patrick’s Day Rosinsky pins a shamrock on his coat

There’s a sympathetic feeling between the Blooms and McAdoos

Why Tammany would surely fall, there’d really be no Hall at all

If it wasn’t for the Irish and the Jews.

Seth Rogovoy is a contributing editor at the Forward. He frequently mines popular culture for hidden Jewish affinities.