We used to conduct weddings in cemeteries to fight epidemics — really 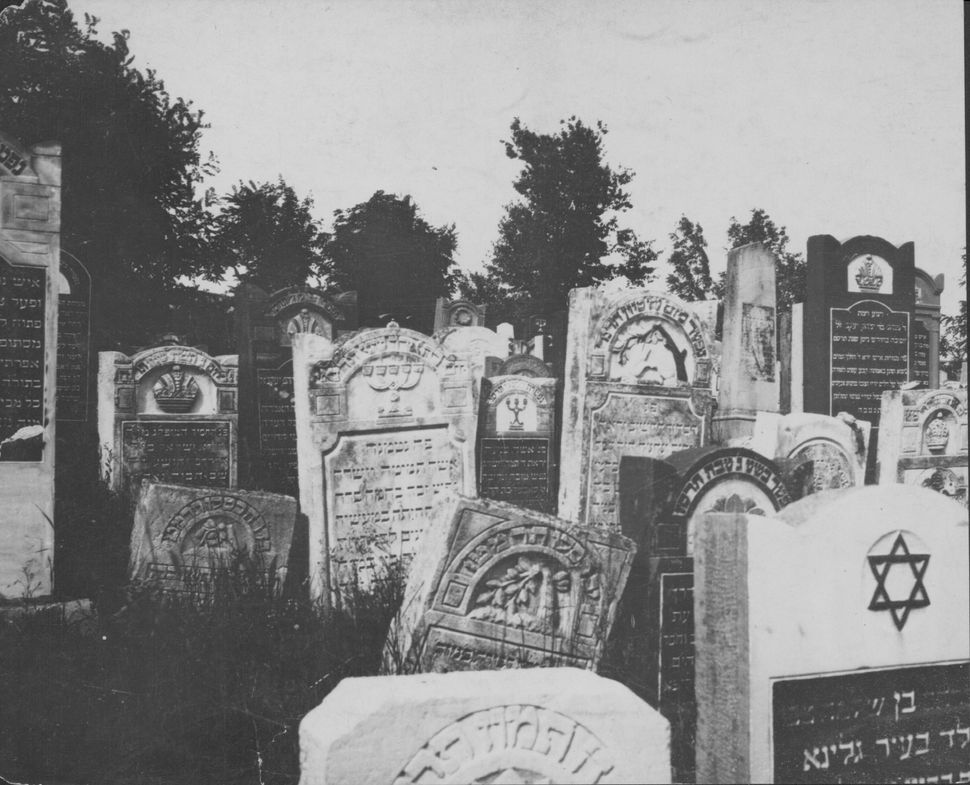 A Jewish cemetery in Poland during World War I. Image by Getty/FPG/Staff

As the world confronts the novel coronavirus pandemic, many Jewish leaders are urging their communities to make changes in their lives to help cut the crisis short: Don’t kiss mezuzot, convene with your minyan online. Keep events like weddings small, if at all possible.

But in past moments of public health crisis, our community wasn’t always so practical. Perhaps the most unusual response was a ritual folk remedy in which the living were married on a field of the dead — before the whole village.

Shvartse khasenes, or black weddings, were, well, weddings performed between two previously unwed people in a graveyard. The betrothed were often poor, orphaned, disabled or some combination of the three. Sometimes they didn’t even know each other before taking their vows. The hope was that the communal hesed — kindness or love — fostered by these graveside nuptials would stop the diseases cold. It was believed joining a couple in the presence of the dead allowed for a more direct appeal to be made to God to intervene.

“To ward off the plague, a Jewish settlement, a town or village, would have a wedding in the cemetery, usually someone who would be difficult to marry off,” said Itzik Gottesman, a folklorist at the University of Texas at Austin. “The first thing a Jew does to ward off the plague is to pray, and also studying the Talmud is considered your first line of defense.”

“This is sort of the last resort when you know that other tests have not worked.”

As Laura Spinney wrote in her 2017 book “Pale Rider: The Spanish Flu of 1918 and How it Changed the World,” such rituals were all the rage in Ukraine throughout the Spanish flu epidemic, but had also been popular in the Pale of Settlement for previous outbreaks of cholera and typhus.

Many Jews dismissed the practice as superstitious or even pagan, Spinney notes, but such ceremonies still went on — even in the New World.

On October 25, 1918, at a cemetery near Cobbs Creek in Philadelphia, Fanny Jacobs and Harold Rosenberg were joined in marriage at 3 pm at the “first line of graves,” according to Jeremy Brown’s book “Influenza: The Hundred-Year Hunt to Cure the Deadliest Disease in History” (2018). A crowd of over 1,000 witnessed the ceremony, which was conducted under a chuppah. As was custom, wedding guests gave donations to establish the new couple’s home. In a recent Guardian article, Spinney noted that the ritual was also performed that year at New York City’s Mt. Hebron Cemetery.

Gottesman thinks the practice goes back two or three centuries, and says it was typically performed as a panacea for cholera epidemics. One was also performed in Warsaw to fend of typhus during the First World War and, Brown notes, similar rituals were documented in the Holy Land in the 19th century, when the region was overcome by locusts.

A number of films feature black weddings, Gottesman said, including the Yiddish period drama “The Light Ahead” (1939), in which a hunchback weds a blind girl.

Shvartes khasenes were a unique means of epidemic defense, because unlike study and prayer, they saw an entire community come together.

In Mayer Kirhsenblatt’s 2007 illustrated memoir “They Called Me Mayer July,” Kirshenblatt painted a scene from a black wedding in the Polish town of Opatów, telling his daughter Barbara Kirshenblatt-Gimblett — the book’s co-author — “how a holy rabbi helped the town during a cholera epidemic in 1892” and how the community rallied to support the selected couple.The matchmakers picked a groom who heated the mikvehs and lived in the hegdesh “a room where the burial society kept the implements for cleaning the dead for burial.” His bride was an orphan — a kaylakhike yesoyme, or “round orphan” because she had no living relations.

The entire town — and some from neighboring villages — gathered to attend the wedding.

“The bride wore a donated wedding dress,” Kirshenblatt and Kirshenblatt-Gimblett’s text reads. “The rabbi conducted the ceremony. Many people shed a tear on this solemn occasion.”

The community was generous with the couple, donating gifts, food and money. A band began playing and the guests danced, even in the face of a health crisis.

“The merriment continued late into the night,” Kirshenblatt relates. “Sure enough the epidemic subsided in a few days.”

We used to conduct weddings in cemeteries to fight epidemics — really