On Mick Jagger’s 77th birthday, the secret Jewish history of the Rolling Stones 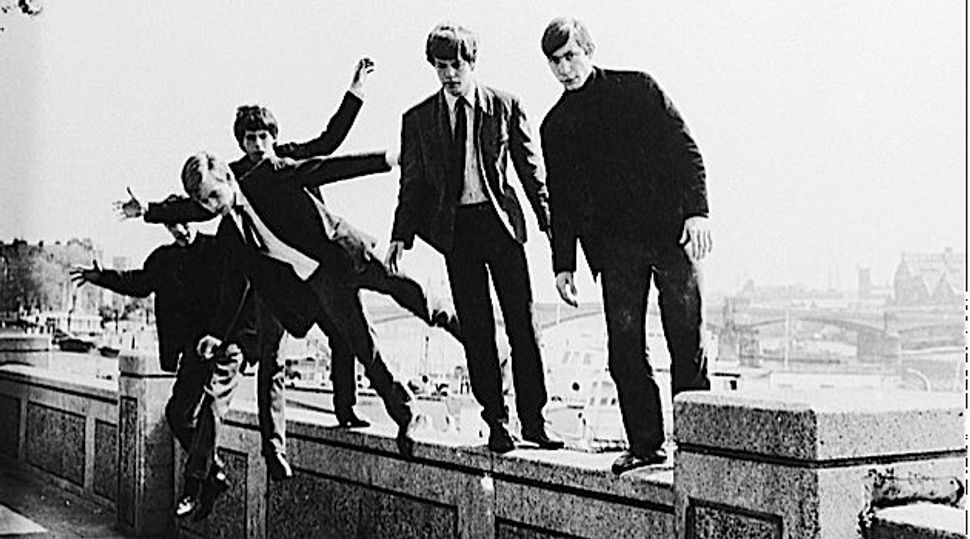 Ain’t Too Proud To Daven Many of the original members of The Rolling Stones started out with Blues Incorporated, a band led by Jewish blues guitarist named Alexis Korner. Image by Getty Images

In 2015, when The Rolling Stones took the stage at HaYarkon Park in Tel Aviv, that event represented more than just the world’s greatest and longest-running rock band’s first concert in Israel. It also marked one small victory in the war against a rock ’n’ roll boycott of Israel being waged by some English rockers, mostly at the instigation of [Roger Waters] of Pink Floyd who, despite some very public efforts, couldn’t sway Mick Jagger and Keith Richards against finally making their Holy Land debut.

The Rolling Stones, in fact, have had a long and fruitful collaboration with Jewish artists, friends and associates, and some Jewish themes have even made their way into their music and lyrics.

Like many early British rock bands, The Rolling Stones started out playing American blues. Most of the members of the Stones served their apprenticeship in Blues Incorporated, a band led by blues guitarist Alexis Korner, who was born in Paris to an Austrian Jewish father and a Turkish-Greek mother. Stones founding guitarist Brian Jones, drummer Charlie Watts, and keyboardist Ian Stewart all played with Blues Incorporated, and vocalist Mick Jagger and guitarist Keith Richards jammed with the group on a number of occasions, before the five joined forces and formed The Rolling Stones.

Building on the lessons he learned as a protégé of Brian Epstein — the Jewish owner of a record store in Liverpool, who turned that city’s most popular bar band into the international sensation known as The Beatles — Andrew Loog Oldham, also Jewish, soon took over management of The Rolling Stones, reshaped their image, and steered them toward a broader musical palette.

For one, he turned them into the anti-Beatles, giving them a more “dangerous” and rebellious image — longer and unkempt hair, and an overt sense of sexuality and violence. Oldham enlisted the services of photographer Gered Mankowitz — the son of English Jewish screenwriter Wolf Mankowitz — who was responsible for the band’s early album covers and publicity shots. Mankowitz was as responsible as Oldham was for creating the Stones’s bad-boy image, and he was the official tour photographer on the band’s first United States tour in 1965.

Oldham also encouraged The Rolling Stones to cover a wider range of songs than the Chicago blues that they originally favored. Their first American Top 10 hit was a version of [“Time Is On My Side,”][2] originally written for Kai Winding by a Philadelphia-born Jewish rhythm and blues songwriter named Jerry Ragovoy (a first cousin once removed to this writer). Oldham also pushed Jagger and Richards toward writing their own songs, à la Lennon and McCartney of The Beatles.

In 1966, Oldham turned over management of the Rolling Stones to a Jewish accountant from New York named Allen Klein. Klein scored the group a monumentally profitable record deal when their contract with Decca Records came due for renegotiation. The deal was much more lucrative than the one Brian Epstein had negotiated for the Beatles, and after Epstein died in 1967, the Beatles turned to Klein in the hopes that he could do for them what he had done for the Stones. Eventually, however, infighting among the Fab Four over Klein’s role was a contributing factor to their dissolution.

1966 was also the year that one of the Stones’s most enigmatic songs was released. “Paint It Black” was an attempt to jump on the bandwagon of raga-rock initiated by The Beatles and The Byrds, with Jones experimenting on sitar. What came out, however, sounded more Middle Eastern or even Eastern European. More than one modern-day klezmer band has covered the song, whose minor-key scale is remarkably similar to some of the Yiddish modes. While more than one wag has commented that lyrically the song’s narrator could be a hasidic Jew favoring the color black, Richards himself acknowledged the song’s debt to Jewish music, telling Rolling Stone magazine, “It was a different style to everything I’d done before… Maybe it was the Jew in me. It’s more to me like ‘Hava Nagila’ or some Gypsy lick. Maybe I picked it up from my granddad.” That last comment is the only hint that any of the members of the Rolling Stones may have Jewish ancestry, but has mostly been dismissed as Richards just taking the piss, as an Englishman is wont to do.

“Paint It Black,” however, isn’t the only Stones song that contains Jewish references. The concert staple [“Sympathy for the Devil,”][4] ostensibly narrated by Lucifer himself, contains the lines, “I rode a tank/ Held a general’s rank/ When the blitzkrieg raged/ And the bodies stank,” which presumably refers to Nazi death camps. The title of the band’s 1972 album, “Exile on Main St.” — widely regarded as its best and hence one of the greatest rock albums of all time — could well be a description of life in the Diaspora for the last 200 years or so, and paired with a later album title, “Bridges to Babylon,” it suggests that the Stones see themselves somewhat as a displaced band on the run. Indeed, the group’s members fled England in the early 1970s at the urging of its accountants. Whether their departure was a way to avoid the onerous tax structure or to escape perceived harassment over numerous drug charges, the Stones wound up living in exile from their homeland for the bulk of the next half-century.

But finally, the most Jewish song by the Rolling Stones was their ode to that most Jewish of cities, New York. “Shattered” — from their 1978 comeback album, “Some Girls” — took on the punk-rock movement, which had challenged groups like the Stones, once thought to have been rebellious but now seen as the height of corporate excess. Lyrically, the song delved into the prevailing gestalt of the city of the time: the era of Mayor Abraham Beame, rising crime rates, recession, austerity budgets, near-bankruptcy, and “Ford to City: Drop Dead” headlines. The city’s decline in those years included the loss of its once thriving, mostly Jewish garment industry, which Jagger immortalizes in “Shattered” with what is perhaps the only use of Yiddish in a Top 40 hit: “Shmatta shmatta shmatta, I can’t give it away on Seventh Avenue.”

Seth Rogovoy is a contributing editor to the Forward

On Mick Jagger’s 77th birthday, the secret Jewish history of the Rolling Stones