Meet Antisemitism Cow, the cow who moos at Jew hatred on Twitter 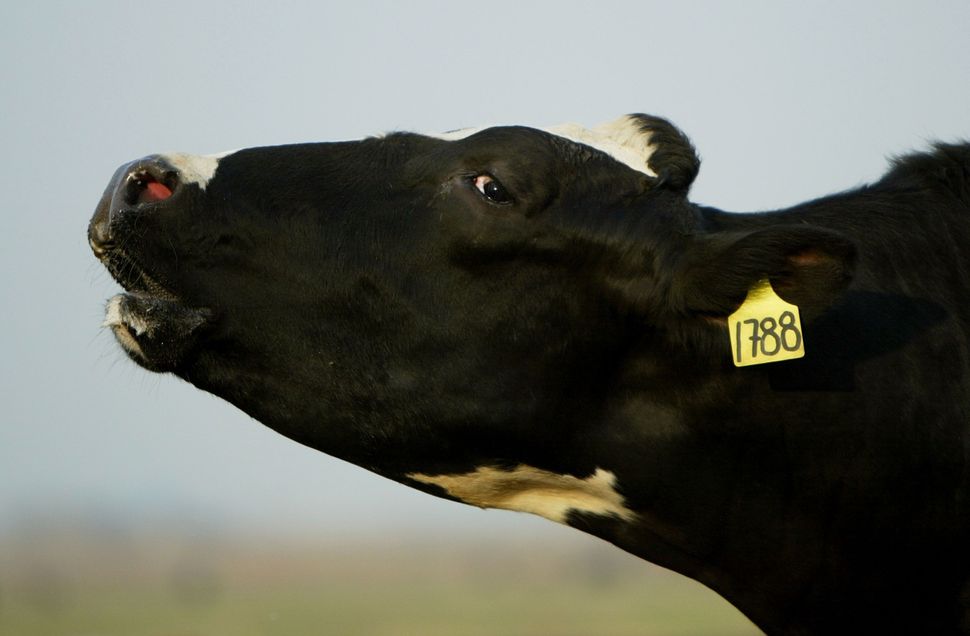 In journalism school, Gay Talese’s 1966 profile “Frank Sinatra Has a Cold” is required reading as an example of a “write-around.”

A write-around is a story in which the reporter has limited access or an uncooperative source (in Talese’s case it was Old Blue Eyes). In hands like Talese’s, a write-around can be masterful and worthy of study. I read it and, having been at work as a journalist for a few years now, have had to occasionally get creative to meet my own deadlines. But I can tell you that nothing could have prepared me for my chat with the internet-savvy bovine known as “Antisemitism Cow”, one that I am now tasked with recounting to you.

I’ve been following “Antisemitism Cow” since it — it prefers that pronoun — joined Twitter in June of this year and began mooing in all caps at antisemitic dog whistles and canards about Jewish control. The cow does great, admirable work and has amassed nearly 12,000 followers. I wanted to interview AC (as I’ll refer to it in shorthand), and reached out to learn more about its operation. But I made my approach carefully.

On September 2, antisemites on Twitter thought they unmasked the handle’s owner and attempted to dox the person (it wasn’t the person), leading scores of supporters to claim, “Spartacus”-style, that they were @AntisemitismCow. We chewed the cud over Twitter DMs to protect the cow’s privacy and anonymity and allow it to do its job unhindered.

I began the conversation asking how a cow like AC got into the business of calling out bigots. It responded with a screenshot of a Google search for “how cows are born.” AC has a roundabout way of answering questions.

AC responded by screen-shotting my message and underlining “so you were born.”

Next, I wanted to know how AC tracked down the impressive number of users pushing antisemitic tropes into the online ether. Did it use keywords?

AC replied with this image of a cow with a magnifying glass.

As AC has its hoof on the pulse of Twitter’s antisemitic trends, I asked what tropes it sees the most. Was it Soros? Was it that Jews control the media?

At this point I became somewhat frustrated. Talking to a cow was not the cake walk I expected it to be. But I figured that AC — while laconic — would provide me with more in-depth answers to questions it was obviously passionate about. So I asked what it wanted its followers to know about hate speech on social media.

AC linked to an article from Film Crit Hulk (a similarly sincere but bizarre internet denizen) that argues the tactic of not “feeding the trolls” is a fallacy that exacerbates online abuse. Film Crit Hulk wants us not to excuse harassment and bigotry but to confront it and lift up its victims. AC seems to agree.

But AC also touched on how the problem was clearly more pervasive than just the individual interactions of “trolls” and the people who respond to them. It referred me to a Huffington Post article from 2019, which found that a year-and-a-half after a promised crackdown by the company on white supremacists, the platform was still swarming with them.

These articles are enlightening and worth your time. I began to appreciate AC’s insight and the fact that these resources, dear to its heart, were clearly on hoof for its reference. I did start to wonder, though, if the pressure of being Antisemitism Cow took a toll on the poor ungulate.

Asked how it kept its cowly composure in the face of such awful rhetoric, it messaged me an image of the cheerful mascot for Laughing Cow Cheese. Laughter, of course!

The cow was wise, I have to admit, and had a simple gnomic quality to its replies. When asked, for instance, what kind of cow it was, rather than saying Guernsey or Jersey or Highland, it told me, with a simple cartoon rendering of a cow with a speech bubble “I am cow!” Indeed. When asked practical questions, like if it had a special keyboard to type, it showed me, through a GIF, how a cow might type quite capably on a laptop.

I was learning so much, but truthfully, I was on the ropes, wondering how I could best convey our exchanges in print. I was in awe of Antisemitism Cow, and daunted by how to spread its message. I understood why so many on Jewish Twitter stan AC, and feared that I was falling into a familiar trap of potential idolatry.

Antisemitism Cow was quick to defuse the situation, assuring me it was not any kind of golden calf, but in fact a cow. (It also sent me a cartoon of people who were genuflecting to a golden calf — like, the part of a leg.)

I felt I was keeping AC from its hard work identifying antisemitic material, so humbly thanked it for its time. But before I left, I asked, as my J-school teachers long ago told me to, if there was anything else it wanted to add or that we didn’t get to.

AC responded with a GIF of the demolition of the larger-than-life swastika at Zeppelinfeld stadium in Nuremberg.

It was as close to a mission statement as I got, but it said it all.

Meet Antisemitism Cow, the cow who moos at Jew hatred on Twitter