Reimagining sukkahs in a time of plague

Each year on Sukkot, Jews invite guests over to their sukkah — a temporary shelter where we eat, schmooze and mark the end of the harvest while recalling our ancestors’ 40 years traveling the desert. This year, sukkah socializing may be a no-go for many, but for a new art initiative timed to the Feast of Tabernacles, it was a chance to bring far-flung neighbors together and find new meaning in an old tradition.

As part of “Dwelling in a Time of Plagues,” which begins Friday October 2, four museums across the country are hosting the work of artists in first-time collaborations sponsored by CANVAS, an arts funding collaborative from the Jewish Funders Network. The idea for the outdoor exhibitions arose out of necessity and a familiar seasonal theme.

Many museums across the country remain closed amid the pandemic, but with proper social distancing the outdoors are mostly fair game, with CDC guidelines acknowledging a lower risk for disease transmission in the open air. Melissa Martens Yaverbaum, executive director of the Council of American Jewish Museums, realized that a number of museums in her network have underutilized outdoor space. Recalling Reboot’s Sukkah City design competition from 2010, Yaverbaum thought Sukkot and the cooling fall weather would be a perfect fit for al fresco artwork and a great opportunity to commission artists affected by the shutdown of physical museum campuses. Each artist received $10,000 for works that meditate on contemporary issues or in cities confronting major challenges.

The definition of neighbors has expanded as the pandemic has forced much of the world to communicate online. And so, the Jewish History Museum and Holocaust Center in Tucson, Arizona will showcase the work of the Argentine artist Mirta Kupferminc.

“In Argentina we are closed, very closed — much more than the U.S.,” Kupferminc said from her studio in Buenos Aires, where travel restrictions remain stringent. But when she got the call to participate in the series two months ago, she said “this is very hard to do, but you know what? I will do it!”

Kupferminc’s contribution to the exhibit, “Clamor in the Desert,” was designed with her team in Argentina, but she accompanied the artists on the ground in Tucson — over WhatsApp video — to select the metal mesh material used in her installation. The structure is made of materials typically used in border fences, but converted to an unconventional-looking shelter “for anyone who feels forlorn.” 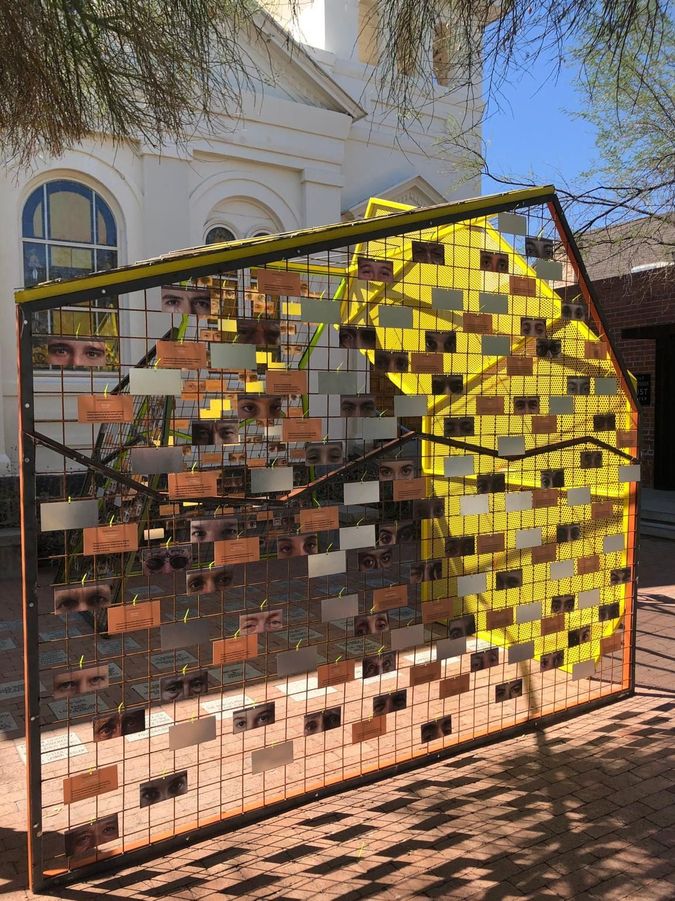 “The shape is completely stable, but it looks unstable because life is not stable for individuals,” said Kupferminc, whose piece is concerned, like so much of her work, with the issue of immigration.

The daughter of immigrants to Argentina who survived Auschwitz, Kupferminc called this theme “very dear,” and recognized it as appropriate for the border state of Arizona. Her sukkah is colored green and yellow — to evoke an etrog — and orange-brown to represent the Arizona desert. Inside are a multitude of images of eyes bearing witness. Mirrors inside the interactive structure will reflect the visitor’s own eyes surrounded by the text, in 60 different languages, of the Universal Declaration of Human Rights.

The Holocaust Museum LA will house an artwork that reimagines a Sukkot custom paying tribute to our elders.

Devised by California filmmaker and artist Tiffany Woolf and produced with Reboot, “The Ushpizin of the Silver Screen: Honoring the Visions & Voices of the Past,” is an installation designed to resemble a Golden Age Hollywood movie house. Inside a structure enclosed by plexiglass, viewers will see an empty movie theater seat set aside for an ushpizin — a “guest,” traditionally a biblical patriarch or matriarch, welcomed inside the sukkah — placed before a film screen and an antique projector.

TV screens to the side of the sukkah will play clips of Woolf’s three-documentary series from Reboot’s Silver Screen Studios, in which she interviews elders of Hollywood like Larry King, Ellen Burstyn and the final interview with the late Carl Reiner. 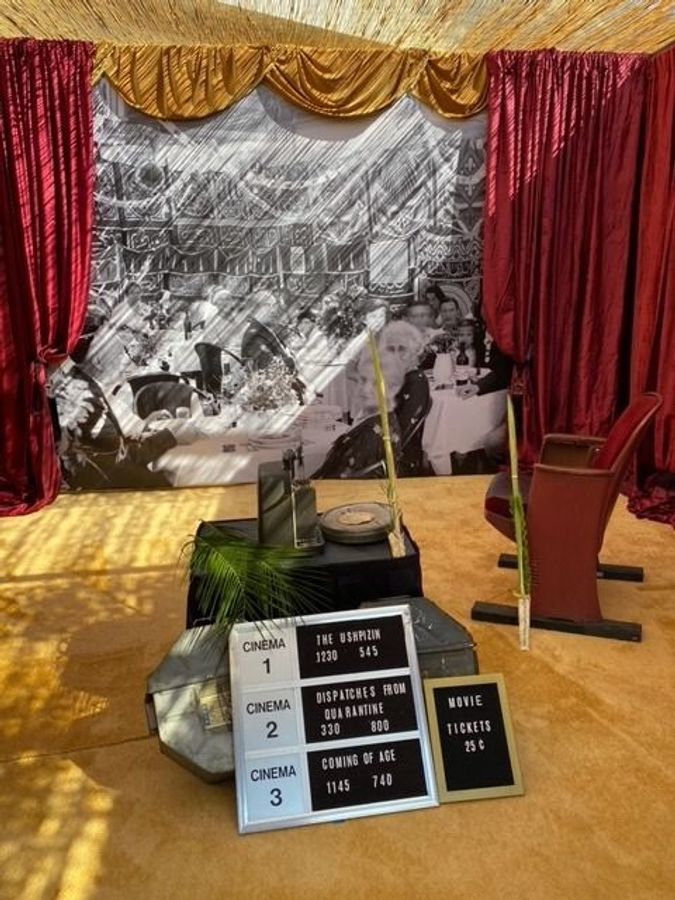 “I’ve been trying to capture these stories of our elders for awhile and to try to house them in this structure as a way of honoring stories and remembrances of the past,” Woolf said, noting the elderly’s resilience and isolation during lockdown. “If it were a regular year, we would do it together in a gathering space, but because we can’t we’re doing this digitally, which is how we’re living our lives now too.”

At the Oregon Museum and Center for Holocaust Education in Portland, a major flashpoint in the national protests against racism and police brutality, dancer, artist and activist Adam W. McKinney has created the installation “Shelter in Place,” which examines America’s tortured legacy of racist violence while suggesting a path to hope and healing.

“Sukkot is Z’man Simchateinu, the time of our joy and our happiness, and also our pain and our history,” said McKinney, who designed the exhibit remotely from his home in Fort Worth, Texas. “I’m thinking about why Covid-19 is so difficult and I think that it’s because it disallows us access to our greatest resource, which is each other. My goal with ‘Shelter in Place’ is as best as I can possibly muster to bring people closer together through the laying bare of my truth and my response to these contemporary moments in history as a Black Jewish person.”

McKinney’s sukkah is “deconstructed.” The s’chach, or roof of the structure, is on the floor and branches are suspended from the ceiling to symbolize America’s long history of lynching, in which many Black, and some white Jewish people, lost their lives. On one wall of the display is McKinney’s film “Unfolding History” made from an 1897 Thomas Edison film of a Black boy dancing spliced together with recent footage of McKinney dancing through the story of the 1921 lynching of Fred Rouse, a Black man, in Fort Worth. The converging wall shows the dance hologram “Glorious Clouds,” with McKinney through the clouds God sent to guide the Israelites through the desert.

Both walls feature tintypes of McKinney dressed as Rouse, a man whose story is largely unknown, at sites associated with his lynching, including the still-standing former base of the Ku Klux Klan, which McKinney’s arts organization, DNAWORKS, hopes to buy and repurpose as an arts center named for Rouse. 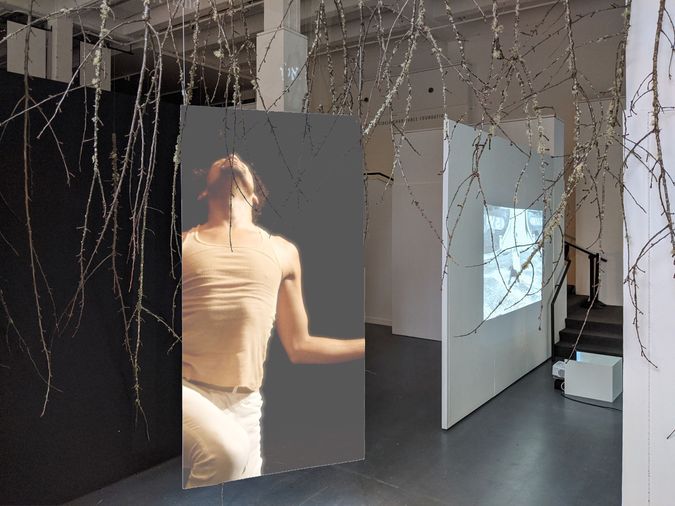 “I’ve offered several ways in to the idea of what it might mean to reconcile histories of hate,” McKinney said, adding he hopes viewers “might locate one way into their power and their responsibility in noticing an effect of anti-Black racism over time and to move in the direction of liberation.”

In an effort to unite the three installations, selections from “Dwelling in a Time of Plagues” will be visible from the windows of the 14th Street Y lobby in Manhattan. The installations can also be experienced online via the Facebook pages of the venues hosting the artwork.

CANVAS founder Lou Cove said the series, which will have a fresh round of art pieces ready in time for Passover with new artists and partners, was a natural and fruitful culmination of his group’s efforts to fund individual spaces, art networks and artists. In the spirit of Sukkot, people are being drawn together — even as they’re kept apart.

“This kind of coordination in the Jewish arts and culture worlds, unfortunately it’s rare and we’re trying to encourage more of it,” Cove said. “These artists, these creative people, these curators, they’re all supporting us through the pandemic. They are entertaining us, they are distracting us, they are helping us to process all the contemporary plagues that we’re enduring — and there are a lot of them.”

Reimagining sukkahs in a time of plague