On his 126th birthday, the secret Jewish history of Buster Keaton 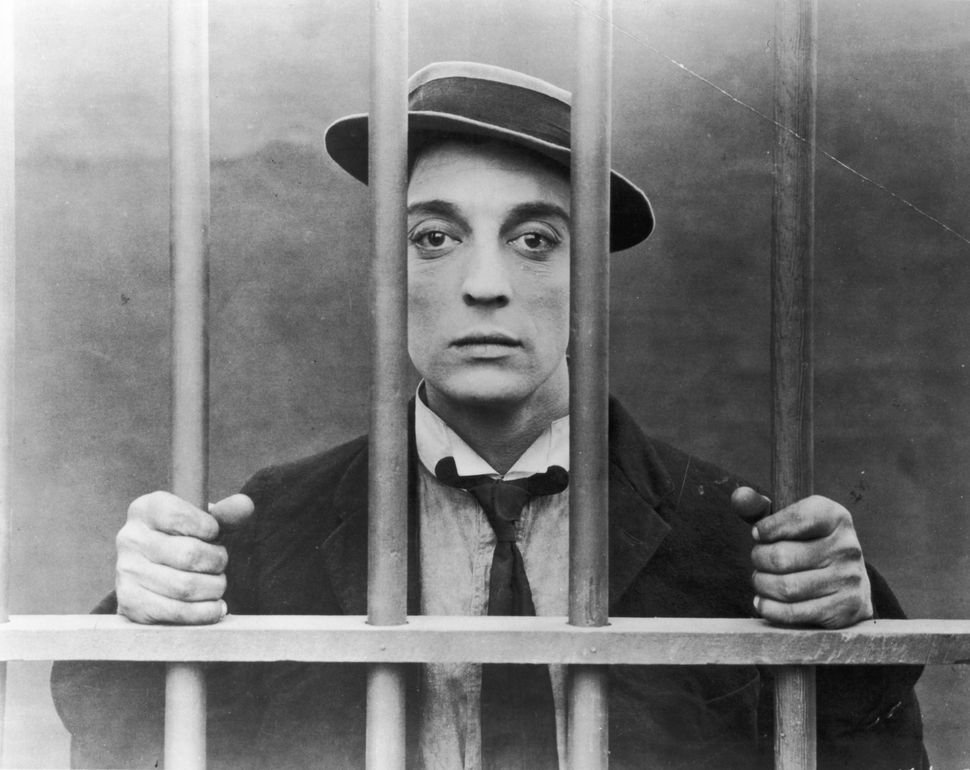 Editor’s Note: Buster Keaton was born on this day in 1895. In honor of the 126th birthday of “The Great Stone Face, we look back on Keaton’s Jewish influences and collaborators.

At the turn of the 20th century, Keaton’s parents, Joseph and Myra, were traveling vaudevillians who co-owned a medicine show with Weisz, an aspiring illusionist and escape artist known professionally as Harry Houdini. As the oft-told story goes, one day, the Keaton’s toddler, Joe, crawled out of his room to the top of a staircase and accidentally ventured down to the bottom without making use of the steps in between. Miraculously, the toddler survived the brutal fall with nary a bruise, and Houdini exclaimed, “Wow, it sure was a buster!” It was a eureka moment: Joseph and Myra saw the future of stunt performance, and its name was Buster Keaton.

Within a year, the Harry Houdini and Keaton Medicine Show Company (also called The Mohawk Indian Medicine Company) dissolved, and the Keatons struck out on their own. By the time Buster turned seven, he joined the act, now dubbed The Three Keatons, the main attraction of which was The Little Boy Who Can’t Be Damaged. Audiences laughed uproariously at the preposterous amount of abuse the boy could tolerate at the hands of his father, who would violently toss him around the stage like a sack of potatoes. A 1905 ad for The Three Keatons read: “Maybe you think you were handled roughly as a kid — watch the way they handle Buster!”

Over time, things grew unpleasant between Buster and his dad, who descended into alcoholism. Keaton and his mother fled to New York City, where at age 21, Buster came under the wing of filmmaker Roscoe “Fatty” Arbuckle, with whom he made over a dozen short films. In New York, Keaton caught the attention of Joseph Schenck, who owned a film company with his wife, actress Norma Talmadge. A Russian-Jewish immigrant, Schenck partnered with a man named Marcus Loew, operating a chain of movie theaters (guess what it was called), before moving to Los Angeles. Schenck became president of United Artists before partnering with Darryl F. Zanuck to create Twentieth Century Pictures, which merged with Fox Film Corporation in 1935 to became 20th Century Fox, under Schenck’s leadership.

In 1921, Keaton married Natalie Talmadge, Schenck’s sister-in-law, who co-starred with Keaton in “Our Hospitality.” The 1920s were Keaton’s decade. Schenck gave him his own production unit, Buster Keaton Comedies, through which he made a series of two-reel comedies before producing the full-length features that established his reputation as the co-equal of fellow silent stars Charlie Chaplin and Harold Lloyd. It was on the basis of this string of a dozen features, including “The General” and “Steamboat Bill, Jr.,” that the late great film critic Roger Ebert called Keaton “the greatest actor-director in the history of the movies.”

Keaton and Talmadge had two sons, Joseph and Robert, but by the end of the decade, their relationship fell apart. Bereft, Keaton was reportedly institutionalized; legend has it that he escaped the confines of a straitjacket with tricks he had learned from Houdini.

With the passing of the silent film era and the onset of talkies, Keaton’s style of film comedy was less in demand. He was also plagued by alcoholism like his father before him. Nevertheless, he continued to work in Hollywood as a gag writer, including on several Marx Brothers films. His recognizable “Great Stone Face” earned him cameos in A-list films including Billy Wilder’s “Sunset Boulevard” and “A Funny Thing Happened on the Way to the Forum,” directed by Richard Lester (born Richard Lester Liebman), with music by Stephen Sondheim and starring the Jewish-American comic triumvirate of Jack Gilford (born Jacob Aaron Gellman), Zero Mostel, and Phil Silvers, known as “The King of Chutzpah.”

Keaton enjoyed a boost in visibility in the mid-1960s as one of several very-not-Jewish-looking celebrities featured in the brilliant “You don’t have to be Jewish to love Levy’s real Jewish rye” ad campaign in 1964, which pictured him holding an overstuffed pastrami sandwich while bearing his signature hangdog look on his face. Mel Brooks has said that his own “Silent Movie” was inspired in part by Keaton, and comedian Richard Lewis, of “Curb Your Enthusiasm” fame, credits Keaton as a role model.

This past June, the city of Los Angeles celebrated Buster Keaton Day, featuring the installation of a bronze plaque commemorating the location of a movie studio where both Keaton and Chaplin created many of their films. In an appropriate, Keatonesque twist, such a plaque had been inadvertently placed across the street from the actual location of the studio 30 years earlier.

What a buster that was.

On his 126th birthday, the secret Jewish history of Buster Keaton